Buildings on the Market Place - No 18

In 1920 this premises on Place des Halles, Preuilly sur Claise, was a barrelmaker's (tonnelier), from a long line of barrelmakers from the same family back to the 18th century. Today, the shop sign says Cordonnerie (shoemaker) and the window says 'affûtage' (knives sharpened), but I think the place is empty. 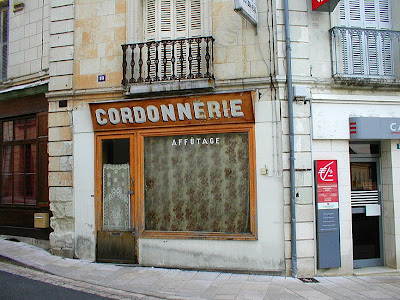 Roger Lezeau says that Monsieur Boutet, who later moved to premises directly across the road, made barrels, boisseaux (a small cylindrical barrel that held a bushel of grain) and repaired chairs. In 1920, one did not buy wine by the litre already sealed. Nearly every shopkeeper and worker owned their own little parcel of vines. Also in current usage were casks (hogsheads), half barrels and tubs of different sizes and styles for gathering the grapes (de barriques, demi barriques, de baquets à oreilles, dits 'basses', et de bassicot pour vendanger). (Note that 'baquets à oreilles' translates literally as 'buckets with ears' ie tubs with handles, but they were called 'basses'.) Boisseaux were also transformed into infantry drums under Louis XV, after being painted in the colours of the Colonel of the regiment.

Monsieur Boutet repaired chairs, but he didn't have the skills to make the very pretty models like those sometimes made of mahogany by Gilbert further up the street in the 19th century.

Monsieur Boutet therefore left this place to a certain Mironeau, a distributor of the new reaper binders. (Monsieur Boutet laissa donc la place à un certain Mironeau - I think this just means Boutet moved out and Mironeau moved in, rather than Boutet gifted the place to Mironeau.) Mironeau was an insane alcoholic who almost killed his young wife by first shooting then stabbing her. She was saved by his worker Albert Pioffet, who managed to divert the blade with his arm. Mme and Mr Mironeau were going to leave for Paris until the wife dispatched her husband with a pistol shot. The inhabitants of the area testified in her favour and she was acquitted.

(Roger Lezeau's anecdote translated by me from his article in Les Cahiers de la Poterne, No34. Monsieur Lezeau was born in 1912 and is a great source of knowledge about the history of Preuilly. Apologies for any mistakes, but these little anecdotes are a great way for me to practice my French.)

[Note: post edited to reflect some points made in the comments.]
Posted by Susan at 10:00

Boisseau in French is the same word as "bushel" in English. Bushels are usually a measure of dry ingredients, not liquids, and that's what the Robert dictionary says about boisseaux. What the man made must have been a basket or wooden tub used to collect picked grapes, no?

Even in 2008, we don't buy our wine in sealed bottles here in the Loire. We have little plastic barrels that we take to the co-op or a winery and have filled with the wine we want. Then we bottle it at home if we want to keep it for more than a few days.

Apologies readers - I didn't read M. Lezeau's footnote on boisseaux properly. He says 'les boisseaux, measures à grain cylindriques, contenaient un double décalitre'. I will edit the post to reflect this information, and thanks to Ken for alerting me.
Re wine, I know lots of people buy their wine today like you do, but M. Lezeau wrote 'en 1920, on n'achetait pas le vin en litre cacheté. Chaque boutiquier, chaque ouvrier, ou presque, possédait son petit carré de vigne', and I thought it was worth including, as he was really just trying to illustrate why there was such a need for a barrelmaker (there was more than one in Preuilly at the time).