Two Plant a Garden in Preuilly

We can't really start creating a proper garden until the exterior of the house is finished (and we can't finish the exterior of the house until we sell the house in Australia and get some money...) but I decided that we could create a little temporary wildlife friendly garden, as an experiment and as a bit of fun. If it worked, it would make the distinctly rundown look of the rear of the house look all the more cottagey, and if it failed, well, we hadn't lost anything.

In May I bought some seeds that I thought would grow into plants that would survive considerable neglect and provide a bit of wildlife food. I bought radishes because they would grow quickly and many insects like the flowers of the mustard family of plants, and small finch type birds are reputedly quite keen on the seeds. We didn't want to eat the radishes ourselves -- neither Simon nor I are particularly fond of them. I also got a variety of flowering plants with proven attractiveness to insects and suitable drought tolerance -- Marguerites (ox eye daisies), Jacobs Ladder, annual cornflowers, sweet rocket and sunflowers. Then I added some herbs -- basil and coriander, and salad leaf, zucchini and sweet corn, just to see if they would survive and produce something edible.

Our back yard was previously the stableyard, and doesn't really have any proper soil -- it's more like hoggin and quite compacted and gravelly. We had some loose limestone blocks from the demolished chimney that were of a manageable size and were just lying around doing nothing, so we laid them out as a border to the planting area, just to delineate where the seeds were and encourage people not to trample willy-nilly across the area, but give the little plants a fighting chance. Then I brought out the pickaxe and hacked away at the ground for a while. This was clearly going to take quite a while, so Simon hooked up his chisel blade to the hammer drill and used it like a jackhammer -- job done in minutes! 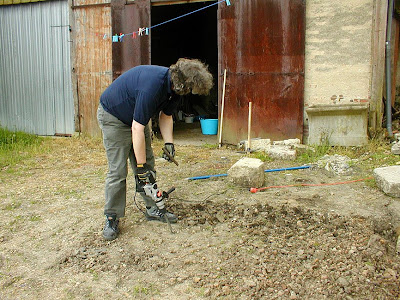 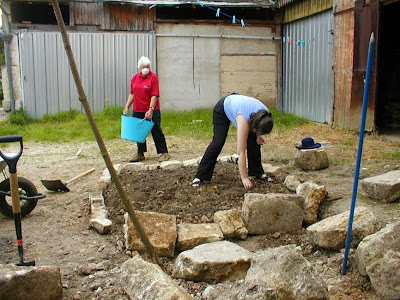 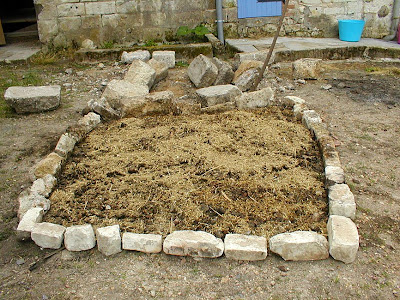 In went the seeds, on went a mulch of 20+ year old straw left over from the days when there were actually horses here (hope we all haven't got farmers lung as a result of handling it!) and the new garden watered.

After 3 weeks we got this: 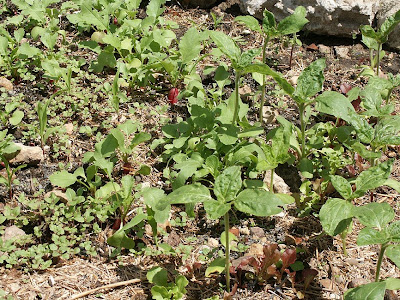 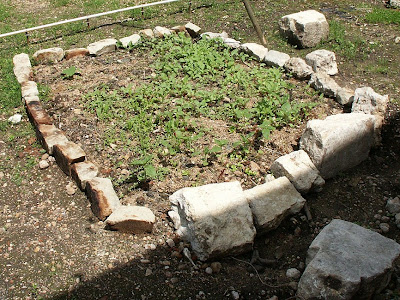 and after 8 weeks it was this: 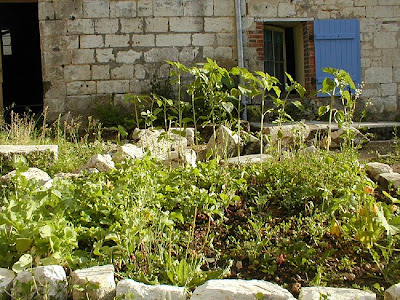 then 10 weeks and looking pretty and cottagey: 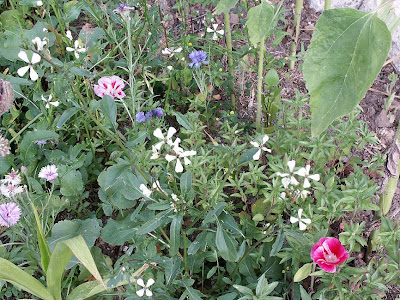 and last week we got this!! 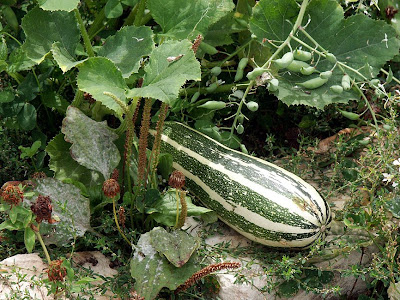 and it looked like this (the sunflowers are a good 2m high!) 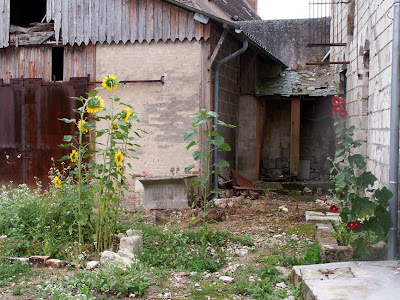 Email ThisBlogThis!Share to TwitterShare to FacebookShare to Pinterest
Labels: Food and Drink, Gardens and Parks, Insects, nature and wildlife, Our house in Preuilly

Susan, what are/is hoggins? And what is farmer's lung?

The garden looks great. That is a nice warm, sheltered space, isn't it?

Farmer's Lung or Hypersensitivity Pneumonitis results from exposure to moulds and spores originating typically for farmers in dust coming from damp hay or straw. A similar malady can affect those who grow mushrooms for example. The ailment can show itself as an attack with flu-like symptoms, but longer term often involves considerably reduced respiratory capacity

A remember my father commenting that my uncle Harry had Farmer's Lung. My Dad got out of farming early, which perhaps helped him live to his late nineties! Since I spent quite a lot of my childhood years misbehaving in and around barns, I sometimes wonder if that explains why I was diagnosed in later years by my doctor as suffering from mild Asthma.

The garden looks great! I remember seeing the radishes, but I didn't know they weren't for you. And that zebra zucchini is cool.

Hoggin is a sort of fine gravel with clay mixed in, extracted from river beds. It is used extensively for surfacing driveways and paths in grand houses.

The back 'garden' faces west, which is not ideal, but manageable. Some parts will never get any sun, but I have an extensive collection of ferns and shade plants in our equally shady and poorly aligned London garden, which will eventually get relocated, so it will be fine.

Farmers lung can be extremely distressing (to the point of life threatening). I once had a client who was diagnosed with it. There was no patient support group and she had a tough time I remember.

The zucchini skin was a bit tough because we didn't catch it in time, but it was exciting nonetheless to pick our own produce for the first time.

The radishes have all set seeds now and totally taken over. Except for the sunflowers, it has gone into autumn scraggly mode. The neighbours probably think I am mad.