Le Blanc is a town we don't visit nearly as much as we could. It's only 30km from Preuilly and has a couple of supermarkets and hardware shops, most of the smaller type shops one needs, and a scattering of restaurants. It is also a very picturesque drive along the banks of the Creuse river. And yet for some reason we go to Loches, which has the same services (if not quite as many) and is 5km further away. I wonder if it is because we are in Indre-et-Loire and le Blanc is in Indre? You can't trust these people from a different department, you know..........

As the road from Preuilly enters le Blanc, it passes under the viaduct built in 1886 that used to carry the railway between Poitiers and Argenton sur Creuse. The railway closed in 1994, and in 2005 the route was opened as a footpath.

I visited Le Blanc with my parents in June last year and Susan's parents in May this year. Both times we parked on the D3 (rue de St Aigny) where the railway line can still be seen crossing the road and walked about 1km to the bridge. 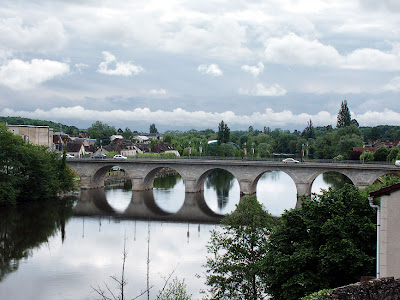 From there you get great views of le Blanc and the Creuse river valley (locally renowned as one of the prettiest in France) as well a a little exercise. 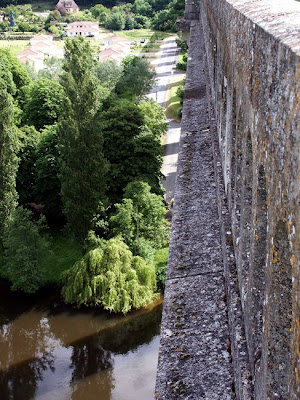 Both times I have attempted a walk across the bridge it has hammered down rain; with my parents we had two failed attempts to reach the bridge in-between showers before we made it, and when I was there with Susan's parents........... Well - the pictures tell the story. 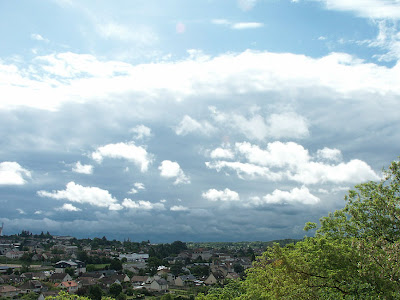 Soon after I took the above photo it rained heavily enough to cause the river to flood some houses in town and cause major consternation. Even a week later the river was still flooding fields further downstream in La Roche Posay. I have some before and after photos of that I will search out and post later.

Nice post Simon, if you trust the judgment of a Loir-et-Chérien! Is that street in Le Blanc called St-Aigny or St-Aignan? One of our main streets in St-Aignan is called l'avenue du Blanc.

Thank you (from one dodgy furrner to another). The road is to St-Aigny, a really pretty village with a chapel that has featured before in the blog (here, for instance http://daysontheclaise.blogspot.com/2008/06/three-church-doorways.html)

I've probably driven through St-Aigny but had forgotten it. I know I've been to Fontgombault several times, as well as to Le Blanc.

I have a memory of Le Blanc in 1989, when Walt and I were driving from Poitiers toward Paris. We stopped in Le Blanc for a coffee, and it seemed an irrecoverably rural place to me then. A few minutes later, we drove north through Saint-Aignan, completely unaware of course that 14 years later we would be living here. And that we would be unreconstructed "rurals" ourselves!