Marianne is the name of the representation of a young woman chosen in 1792 to stand for Liberty and the Republic. It wasn't until much later though, after the fall of the Second Empire (Napoleon III 1852 - 1870) that she became a commonplace object, installed in public reception spaces, registry offices and council meeting rooms.

A recent exhibition in Loches of sculpture from the Touraine displayed two examples, from the furthest extremes of our province.

The first is from Preuilly sur Claise, as far south in the Touraine as you can get. She's plaster, by an unknown artist and now held in the Poterne Museum. You would think she was from the hands of an 18th century neo-classical artist, with her generous drapery in the ancient style covering her bosom and leaving us with just a hint of perfectly formed breasts. Her hairstyle is as dignified as a Roman matron's, her profile impeccably Grecian, references to those supposed golden ages of probity and political virtue. 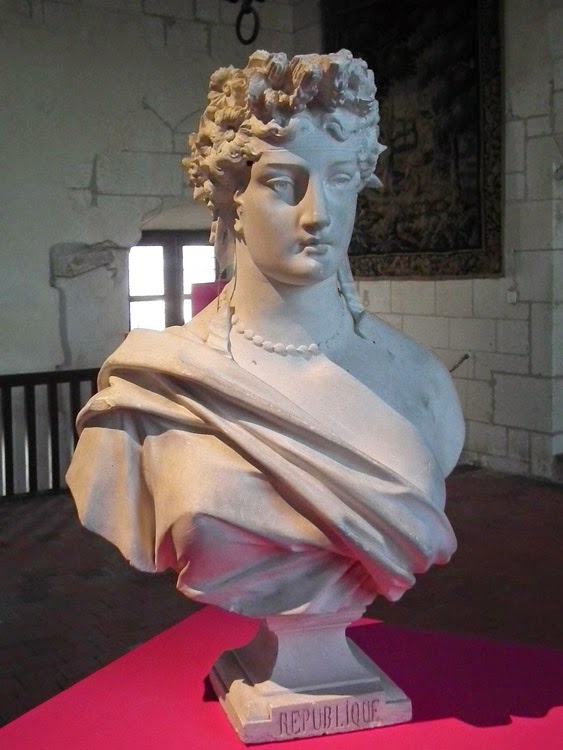 She dates from around 1848 and is part of movement to establish an authorised, conservative image for the Second Republic which would symbolise the Republic and its democratic and social values. Frankly, she looks dull and complacently bourgeois (pearls!). Respectable town halls around the country widely adopted her, often positioning her so she was facing away from the church.

The second is from Le Boulay, way up in the north of the Touraine. This one is terracotta, also by an unknown artist, and from 1870, the beginning of the Third Republic. Now she wears the Phrygian cap, defiant after the fall of the Second Empire, and referencing her revolutionary roots. She is very carefully crafted. The artist has created a very young woman, idealised in the Greek classical mould (think Victory of Samothrace...). The base has the word Liberty inscribed on it. For all her 'red bonnet', she looks far to young and sweet faced to be a believable defender of liberty. 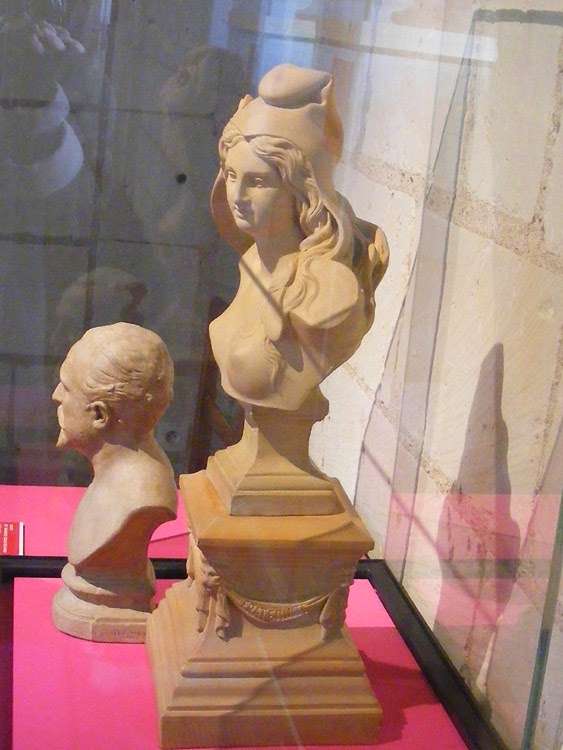 These two busts are representative of the abundant and popular public statuary of the time, embodying the sentimental and idealised nature of the French people's involvement with the Republic. They are easy to dismiss as trite, but we should occasionally look past the fashions of the time and remember their meaning and history. Hundreds of versions of Marianne exist. She may be authorised, but she isn't standardised and she comes in all sorts of materials, cast or sculpted, printed or painted.

Email ThisBlogThis!Share to TwitterShare to FacebookShare to Pinterest
Labels: Loches and area, Memorials, Pictures of Preuilly

Brigitte Bardot, among others, posed in 1968 for a Marianne by the sculptor Alain Asian.

I think BB might be a warning as to what happens if you get too much sun.

The Proolie one looks quite fierce... in the "nothing gets past me, nothing" sort of look!
The terracotta one looks a bit like "I'm Mavis, I'm on work experience!"...
ie; a bit wet!!

I agree the terracotta one looks a bit wet to be a defender of the nation's ideals.

Probably wet enough to think that if she rushed into action the world would change.

I can see her rushing into action for fluffy puppies, but not for abstract ideas.

in 1988. Her former husband had a picture in his office at the FMI and liked to talk about it when visitors should enquire.

Whatever possessed her to marry DSK do you think?