What's the deadliest carnivore you can think of? I bet dragonflies aren't anywhere near the top of your list. But maybe you should think again.

Lions' successful kill rate is less than a quarter of the number of hunts undertaken, sharks just over half. Dragonflies, on the other hand, could be the most effective hunters of all, according to some new research, catching 95% of their targeted prey.

Researchers say they are apparently insatiable too. When kept in captivity they will eat absolutely every fly offered to them. One researcher gave up trying to find out what their limit was, after offering 30 flies one after another to an individual dragonfly, who gobbled up all the unfortunate flies with alacrity.


A female Blue Emperor Anax imperator eats a Flesh Fly it has captured in a wheat field. 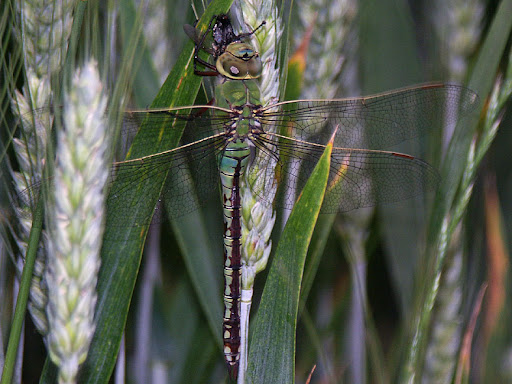 Dragonflies brains are different to other insects, allowing them to focus on a single victim in flight, no matter what else is milling around. The brain and the wings are also linked in a way that allows minute and virtually instantaneous adjustments to the flight trajectory. They constantly manoeuvre themselves into a position so that the prey is steady in the same place in their visual field all the time.The prey is oblivious to the dragonfly's attack, as it swoops in from behind and below, scooping up the victim in a basket formed by their bristly legs.

Dragonflies fly differently to other insects too. They can hover, fly backwards, upside down, with one wing missing, pivot and manipulate each wing separately, all at a speed of 50 kilometres an hour.


A female Broad-bodied Chaser Libellula depressa rests on vegetation near a ditch. 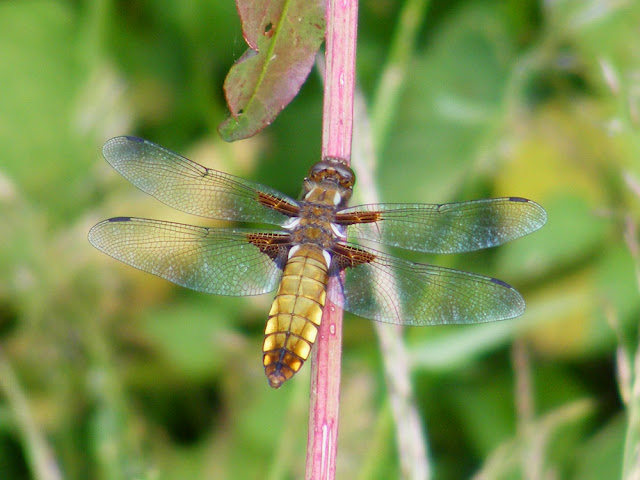 They are incredibly visual creatures, with a 360º field of view. Many of the big dragonflies will blatantly come up to anyone moving into their territory to check them out. They'll fly past a couple of times, then ignore you. What you probably don't realise is that they can see you whether you are in front of them or behind them.

They are effectively deaf though, so you can make as much noise as you like while dragonfly watching.


An Orange-spotted Emerald Oxygastra curtisii, resting, but giving you an idea of how they approach prey. 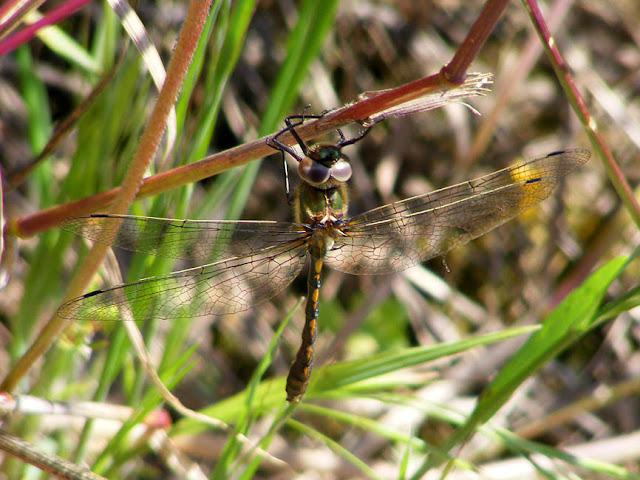 The new research about their ability for selective attention was done in Australia by Steven Wiederman and David O'Carroll. They reported their findings in Current Biology. It seems the US military is taking an interest, as dragonflies share characteristics with drones.

Thanks to regular reader Sheila from Texas for alerting me to this new research. 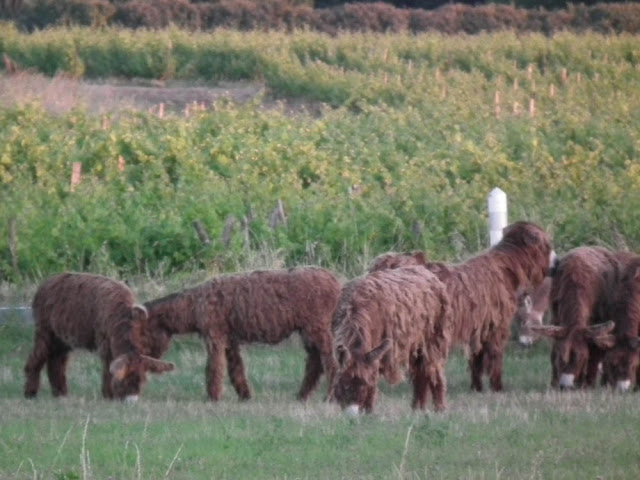 After the business was completed we moved on to lunch, all heading off to the Hotel de la Gare in Montrichard, where a jolly good time was had by all. They have a great buffet, generous simple traditional mains and an impressive cheese trolley. We take clients there frequently. Jean-Louis was delighted to find they stocked his favourite wine. Once lunch was done Michel and Annick went to visit her mother at Saint-Aignan and we headed for Chateauroux, where Jean-Louis and Suzanne live -- via several impromptu stops.

The first petite pause was to Joël Delaunay, a winemaker in Pouillé (the source of Jean-Louis' favourite tipple). The winery is certified as agriculture raisonnée ('intelligent/integrated agriculture' ie not organic, but pesticides are not applied prophylactically or as a matter of course, but only when 'reasonable', and crops are monitored carefully.) All the while as we travelled Jean-Louis pointed out houses that had Tractions in their garage. We couldn't necessarily see them, but he knew all the Traction owners in the area.

This led to our next stop, which to our surprise was the locked compound of the Gendarmerie in Ecueillé. It turns out that one of the Traction club members is a policeman, and it was his day off. All the gendarmes live in the compound, so we stopped off for a cool drink and a chat. His Traction was parked alongside the police vehicles, as was a Traction we know from several encounters in Preuilly. It has just been sold and I think he was looking after it temporarily.

Oh, what a lovely blog you have - and how lucky you are living in such a beautiful place. I love information about dragonflies: I always watch them in the sunshine, and they look so delicate, but I had no idea they were such deadly killers.

In future I shall look at beautiful dragonflies in a completely different light!

Thanks for the information as I can use the ideas when talking about animal adaptations - will make a change from the camel, seal and polar bear!!

Christine: thank you very much!

Gaynor: Always good to have something other than mammals in your repertoire.

Saw a large dragonfly yesterday evening...
a hawker by its silly-yeti...
flying in an uncontroled manner...
it was in the grip of a Hobby!

And on Sunday evening another... looked like a spectre...
flew over my head as I was sitting outside the garden door....
it rose gently up towards the hangar gable apex where a "July"fly was dancing....
then vanished rapidly over the house...
in the beak of...
Mrs. Black Redstart...
that superb vision...
targeted on the mayfly...
missed the peril completely!!
Great post...

Tim: great observations. Of course the irony is that Hobbies hunt in the same way as dragonflies, with the selective ability to lock in on an individual prey objective in a flock.