The Best Mussels in the World 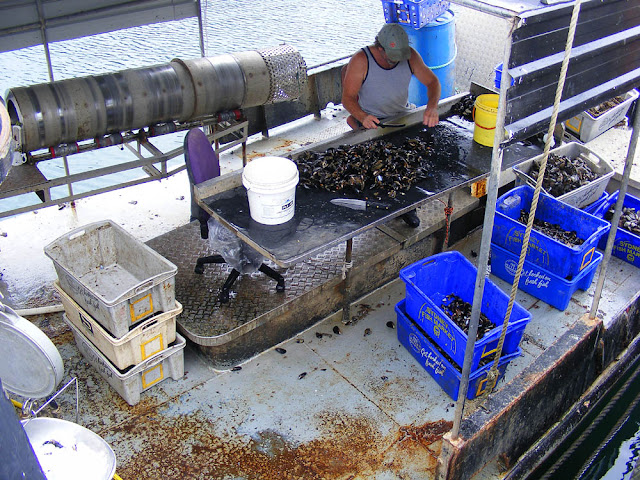 We bought a kilo of mussels from this boat in Eden Harbour, New South Wales, last December. They had just been harvested from the mussel beds across the other side of the bay -- you can see them from the harbour. The owner assured me that he had just come back from Europe where he had tried the mussels everywhere, and he had travelled all over the world. These were undoubtedly the best mussels I would find anywhere. They were certainly very large and they were very good. Unfortunately, I'd had a stupendous eggs benedict breakfast at the Waterfront Café in nearby Merimbula, and couldn't really do the mussels justice at lunch time. They cost $10 a kilo (the equivalent of €7.85 -- normally I pay €5 or €6 per kilo at the fishmongers in Preuilly market, for mussels half the size and rope grown at La Rochelle.)

************************************************
We're Back!: We got back yesterday afternoon from a mini camping break in our newly acquired tent. Two points will be awarded to anyone who can guess where we went. Here are some clues:
We had a great time although having a piece fall off the car on the motorway on the way home was not ideal. Fortunately Simon is the sort of bloke who has a toolbox full of random stuff, some of which might come in handy for any given emergency. Photos and blog posts to come.

Surprisingly, although several people guessed that the rasta donkeys were the breed called baudet de Poitou, and I have awarded them points, no one picked up on the 'in pyjamas' part. The phrase I was actually looking for is ânes en culottes, and you will find out why in a few days.

So, the answers to the questions are:

We went camping on Ile de Ré, inside the 17th century star fort created by Vauban around the town of Saint-Martin-de-Ré. The donkeys are a tourist attraction in the town and known as 'donkeys in trousers'.
Posted by Susan at 09:00

I'm guessing the rasta donkey is the baudet de Poitou... and the oysters, salt marshes and bike shops would suggest one of the islands? I'm going for Noirmoutier, though the defensive complex makes me think not...

Being a French native, I might be at an advantage. I guess you went to Île de Ré. The fortifications your talking about were devised by Vauban. I had never heard of Baudet du Poitou, nor even seen a picture of them until this morning. Thank you for this interesting post.

I think ... La Rochelle ... and of course Vauban. He (well his fortifications) are all over France. Not sure about the donkeys though. But they do make great sausages, don't they, :)) Looking forward to your travel report and photos! Martine

P.S. The bikes may be an indication that you went to Holland! But then you would have stopped here to share a drink and meal I hope!

We've always found that the mussels in France puney compared with the big bronze ANZAC ones here but delicious just the same.
Had them at Leon's of Brussels as well.

Baudet du Poitou donkey, quite endangered in France and worldwide at the moment.

St. Malo, architect of the military complex, Vauban (this second answer is a total guess!)

Points are awarded as follows:

3 points to chm for getting the place right and the architect.

1 point to Martine for the architect.

2 points to Anton for donkeys and architect.

1 point to Lucie for mentioning the donkeys.

The answers are now added to the blog.

Leon: I agree, but size doesn't seem to matter with mussels -- both are delicious.

Lucie: We like the area around Eden too. We didn't go whale watching this trip, but I have been before from here.