The local museum in Preuilly, housed in the Poterne below the chateau, has a fine collection of about 30 Tourangeaux bonnets. Intricately embroidered, with minutely goffered brims, they were worn by all adult working women from 1860 to just after the First World War. 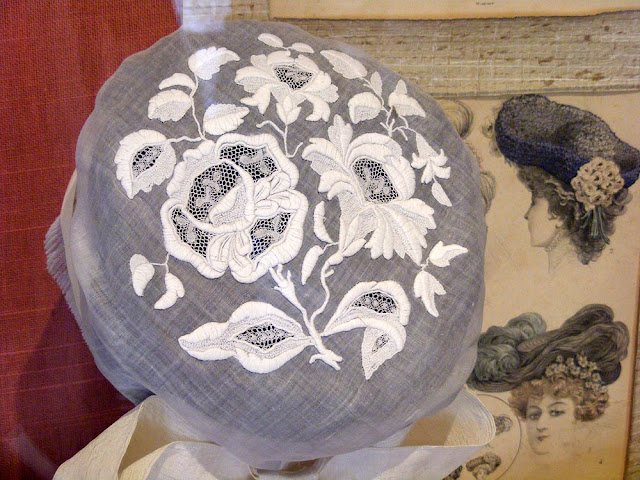 They developed after the Revolution, when the sumptuary laws which forbade the wearing of lace by anyone but the nobility were abolished. Coupled with that, Josephine Bonaparte developed a taste for French provincial lace and so popularised such laces at court.


A case full of Tourangeaux bonnets in the museum at Preuilly. 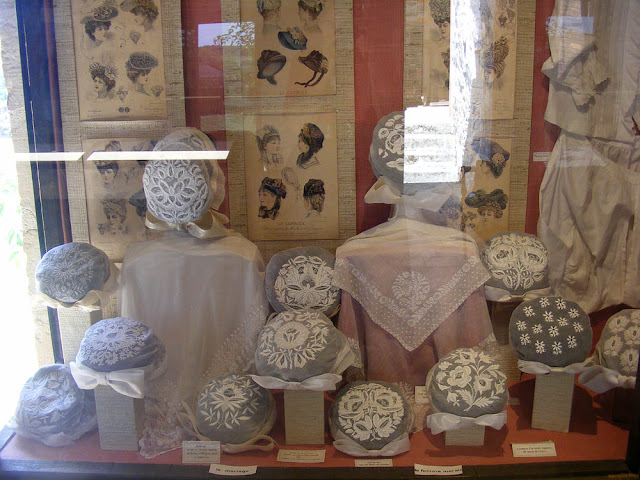 Little by little, each region of France developed recognisable styles of headress. The mechanisation of tulle manufacture and Valencay lace made them more affordable. The Touraine was a rich provence and the embroidered floral bonnets here were unlike anything elsewhere. For ordinary daywear women wore a round mousseline bonnet, barely decorated. But for going to the market or other little outings, women had a more elaborately embroidered bonnet with 14 motifs. When the outing was more formal or more festive, the bonnet worn could have 21 or 28 flower motifs. The number of flowers was always a multiple of 7, for the 7 graces of women in the catholic tradition (wisdom, intelligence, science, counsel, strength, piety and fear of God).


Demonstrating the goffering technique. Valencay lace is wrapped over and under fine metal wires (known as 'straws' in French) to create tiny tubular pleats. Pots of starch, gum arabic and laundry blueing are on the right. 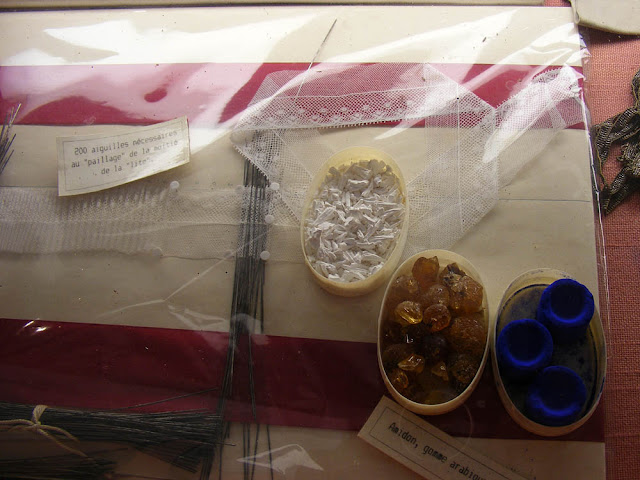 Often the centres of the flowers are done in jours d'Angles, a nearby drawnthread needlelace tradition, which is determinedly kept alive today by a few women in the town of Angles-sur-l'Anglin. The bonnets of unmarried women featured a large single flower, usually a rose, that covered most of the crown. Once they were married, they wore bonnets with a pair of roses on the crown, to symbolise the shared love of husband and wife. These central motifs are then surrounded by a garland of other flowers, which once you were married, came to represent your children.


Side view of a bonnet. 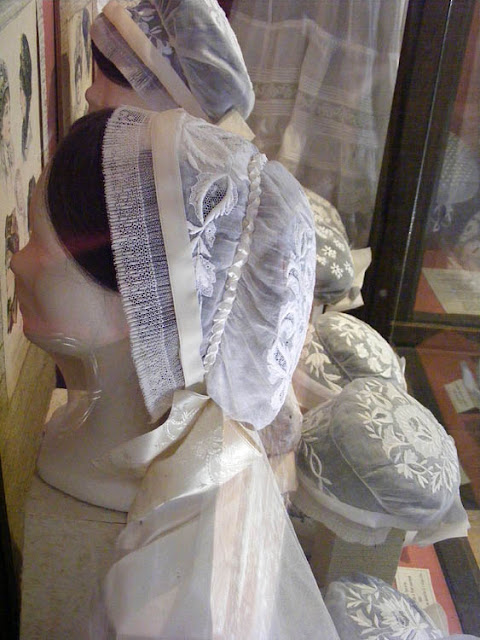 Not everyone made their own bonnets. If you were well off, you could purchase embroidered bonnets from any number of specialist workshops. Amazingly, the workshops rarely duplicated a bonnet. Needless to say, they got quite competitive - who would turn up at the fete in the most beautiful, best laundered and most exquisitely goffered bonnet? Apparently the miller's wives were the most noted for their abundantly and delicately embroidered bonnets.

In the days when women all had long hair, but washing it was rather a rigmarole, a lovely bonnet to keep your hair free of dust or to cover it up if it was getting a bit dank, was an entirely practical item of clothing.

If you want to see the bonnets, the museum is open Sunday - Friday afternoons during the summer school holidays.

*************************************************
Saint-Martin-de-Ré: This is the answer to yesterday's quiz about where we went camping. This picture is taken from Google Earth, with the campground outlined in yellow. The entire town sits within one of the forts designed by Vauban for Louis XIV. Saint-Martin-de-Ré is on l'Ile de Ré, just off La Rochelle on the Atlantic coast of France, and a couple of hours to our west. It is the birthplace of Nicolas Baudin, explorer, naturalist and career naval officer, who was sent to map the coast of Australia and collect specimens of plants and animals on behalf of the French government just at the same time as Matthew Flinders was similarly engaged on a mission for the British. 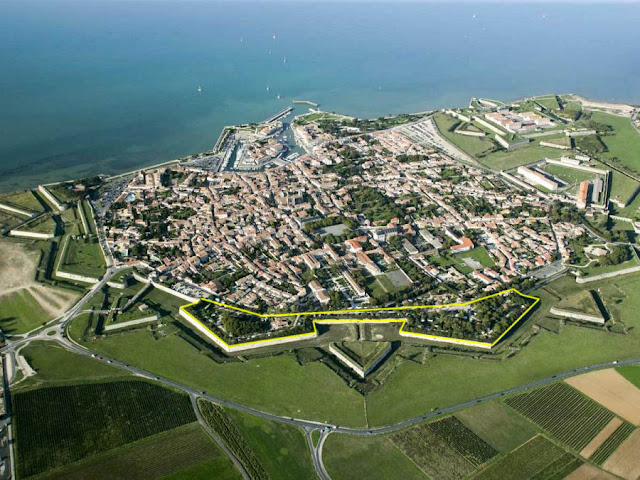 ****************************************************
Orchard News: To my considerable surprise the last of our sweet cherries have survived our absence. I thought the bit of rain a few days ago would cause them to split, and the birds would eat them. But today I picked 7kg of fabulous cherries. A few had split, but the birds must be so over cherries that they seem to have left the tree entirely alone. The variety is Géant (Giant), a late cherry that benefits from being left on the tree, so I am very happy indeed. It seems a shame to cook them, as they are so good fresh. However, I don't think we can munch our way through 7kg in a couple of days. And besides, cherry sponge pudding in the winter is something to look forward to.

The strawberries have really slowed down, to just a couple of hundred grams every few of days. Some tomatoes are beginning to set and the peppers have buds. One of the aubergines has a flower, but the zucchini has been eaten by snails. The leeks are looking good, but there is no sign of the potatoes flowering. The celery doesn't appear to be doing anything.

Susan, preserve them in syrup...
works wonderfully!
Pauline says that that is what we are doing to ours this year...
but the first pick is now inside us...
ooops! Consumptive error!!!

It is a great place, we have been there the last two years. Did not realise where the camping was though.

I wonder exactly when an unmarried woman made her marital bonnet... Did she live in hope with the bonnet tucked away somewhere, or start work on it when she was promised? The first time she wore it would have been pretty special. P

P: I'm guessing she started work on it after betrothal and it became part of the trousseau. There will have been a rule about what was and wasn't proper though, for sure. The 19thC is full of such 'traditions', a reflection I think of prosperous times and everyone creating a structure for moving up the social ladder.

Fascinating post and beautiful bonnets.
We will definitely visit the museum this summer.

The bonnets are so beautiful, lots of hours there,I know , am halfway through hand quilting a gift for a friend and have to be finished by Thursday night.
Hope the Zuchinis get a second chance at thriving, snails won't cross sawdust, so you could try that.
Good news about the cherries, sadly they won't be available here until December, at which time they will be $18 a kilo.

Margaret: Cherries in the market here are about €5-7.

There used to be a museum of coiffes at Ponts de Ce...I don't know if it is still open.
When I was first in France the great grandmas were still wearing what used to be the everyday coiffe on occasions like weddings.

Fly: I think there is a museum de coiffes somewhere still open. I've seen a few relatively modern photos with old women wearing them, as you describe.