One day in April we arrived at the Chateau Gaudrelle winery and were met as usual by their intern Cristina. We asked where Alexandre was, as it is always nice to catch up with the owner if he is around.
'Oh', said Cristina. 'He is out in the vineyard practising sexual confusion.'

I'm afraid we just fell about the place. 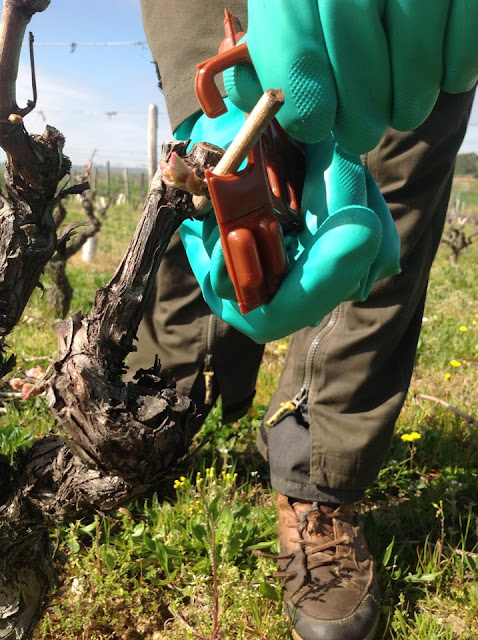 What Alexandre was doing was hanging plastic dispensers of a product called RAK® (developed by BASF Crop Protection) on the vines. It allows him to combat the damage caused by Vine Moth caterpillars without resorting to insecticides. By broadcasting a pheromone that matches the chemical attractant produced by the female moths when they want to mate, the males don't know where turn and in their confusion fail to mate. Failure to mate means failure to produce caterpillars. Alexandre says the product is extremely well regarded in the industry.

Email ThisBlogThis!Share to TwitterShare to FacebookShare to Pinterest
Labels: butterflies and moths, Food and Drink, Insects

I fell about too...wonderful images conjured up and promptly slapped down again...

I love the sexual confusion! When we first bought our house in Blois, it took two weeks to connect the internet and we had to go to a local bistrot with free wifi. When it was closed, we parked outside on the corner of a roundabout hoping the police wouldn't surprise us!

We used to accidentally practice here... our longere, three pannel, lounge windows have green chiffon blinds...
at this time of the year we had loads of male glow-worms attracted to them...
a case of "CWOORRR! Look at the lights on her!"
So we kept them rolled up in summer...

Fly: We shouldn't laugh at people who are not speaking in their mother tongue...but this was just too much!