A couple of weeks ago we had a small gas leak which meant we had to call the plumber. When he arrived, the gas leak turned out to be a quick and easy fix, so Simon asked if he could install our sink, which we've only been waiting 20 months to use.


Things to do with a Traction Avant jack #59 -- propping up a newly glued in sink. 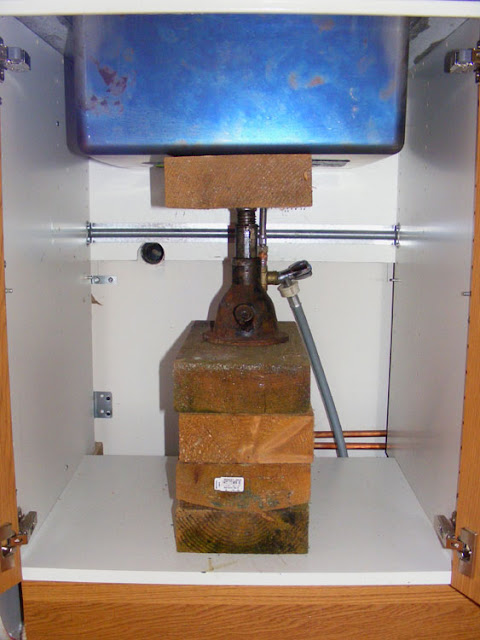 Pascal, bless him, agreed quite happily and has done a beautiful job. It's another great milestone in our house renovations. 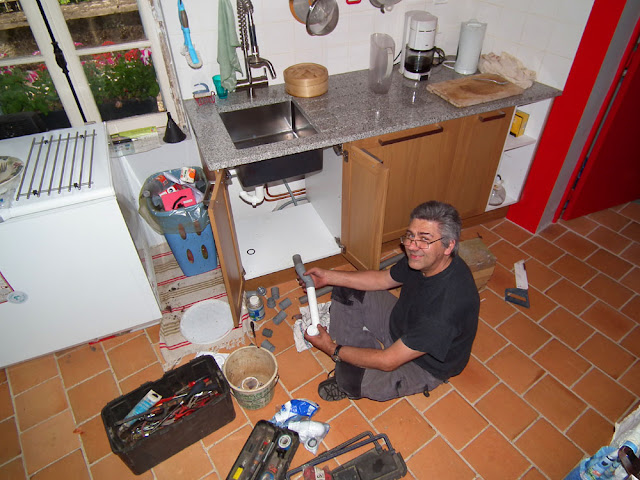 He told me I needed to have kept phoning the office at Bertucelli's where he works. For small jobs like this the plumber only turns up if you are persistent. I said I'd phoned, emailed and gone up there numerous times and had given up reminding them. I think he was a bit shocked we had been left waiting more than a year and a half all the same. While the glue on the drain pipes was drying he asked to see our attic bathroom because he had only seen it before the bath went in and wanted to see it finished (it isn't quite, as we need to get a cabinet made for the wash basin, but you can see how it is supposed to look). He was suitably impressed.


Voilà ! A fully functioning kitchen sink! No more washing up or scrubbing vegetables in the laundry. 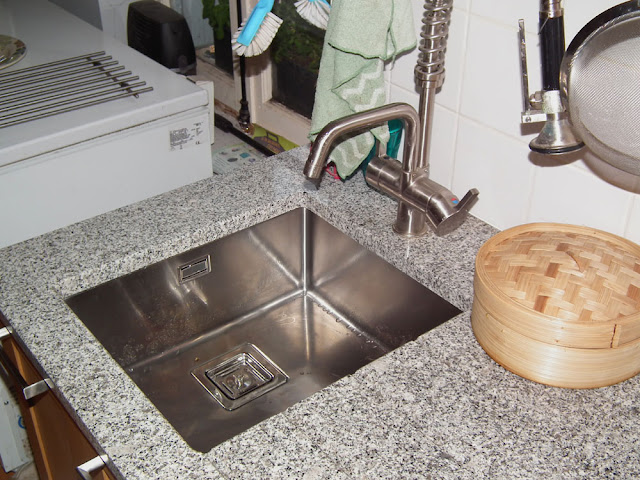 The Portuguese guys who installed the granite bench tops would have done it, but because there was a mistake with the hole size, the replacement custom made sink was delivered after they left.

****************************************************
Produits de terroir:  The conditions on Ile de Ré are responsible for 3 special products for which the island is famous -- potatoes, sea salt and oysters. Several of the oyster producers offer dégustations (tasting sessions). We went to one with an attractive set up where you sat on a stool to a high rustic table overlooking the bay and partook of a selection of seafood and wine. We chose the €14 mix of 6 prawns (crevettes) and 6 of their #3 oysters with a muscadet from Sèvre et Maine (across the bay to the north, around Nantes). The prawns weren't from the island, but had been caught somewhere dans le coin (unspecified but nearby) according to the young woman who served us. Number 3 oysters are the middle size (they range from 1 to 5 -- see my previous post on oysters). It was a very, very pleasant experience. The next day we bought a dozen #2 for €6.90 from a producer with a stall at the market at Ars en Ré, which were superb. We could have gone out and harvested our own, had we but known when we visited the Grouin, where individuals can go at low tide and gather oysters above the line where they are farmed. This is called pêche à pied and you are allowed to take 5kg of oysters bigger than 4cm for personal use according to a woman I spoke to on the beach. 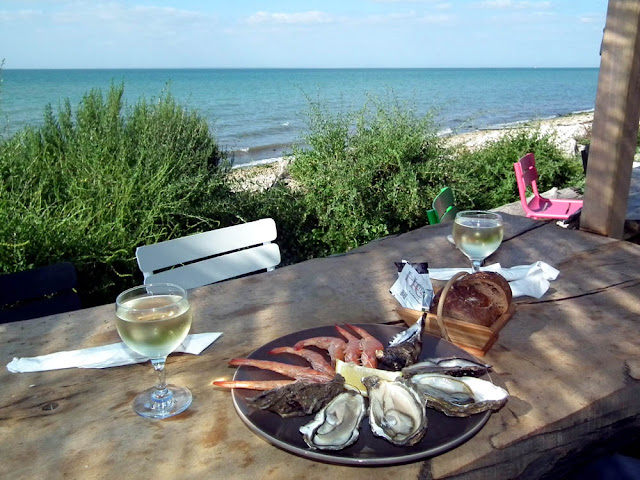 *****************************************************
Another Convivial Lunch: Yesterday we had lunch with about a dozen of the Archaeological Society members, hosted by the President, Bernard and his wife Christine at their wonderful late medieval farmhouse. I made a Greekish salad with some superb lettuce given to me the day before by Tim. My vinaigrette got the nod of approval and questions about what oil and vinegar and what proportions (olive, walnut, sherry, 5:1:1 with a pinch of salt, if you are interested). Sprinkling toasted mixed seeds on the salad was less successful, and I saw at least one person picking them off. Whilst my outfit of flowing white linen was rated très chic, I was also informed that I have a Belgian accent (I don't pronounce words like puits correctly). Simon was designated Monsieur Drôle by the hosts' 4 year old grand-daughter. The meal was cold meats and salads followed by clafoutis and apricot tart. Everything was delicious and we enjoyed chatting with everyone.

Email ThisBlogThis!Share to TwitterShare to FacebookShare to Pinterest
Labels: Kitchen, Our house in Preuilly, Plumber

It's amazing how used to living without things you become - and how nice it is when service is returned. Having had my gas boiler replaced with an electric one, I can't believe the luxury of a shower that lasts longer than five minutes!

Twenty months without a kitchen
sink is bad enough, but added on
to what seemed like eons when you
were without a proper kitchen at
all...don't know how you did it!

A Belgian accent!??? Come on, you must be joking. Now, should I feel offended or flattered? ::)) LOL! Seriourly Susan, I admire the efforts you put into learning French. What a progress since we met for the first time in 2009!!! Let me assure you, you are doing a darned good job! Keep up the good work. Martine x

Martine: I thought you'd get a laugh out of that :-)

I've been accused of a Belgian accent too, by a Canadian... I was rather flattered, it's better than English!

how wonderful to get that done!

Congratulations on the sink...I remember long periods of system D when renovating...

A Swiss friend took me to pick up oysters....a bit hairy but well worth it in the results.

Fly: this didn't look hairy at all. It appeared to be a family activity.

Well, that must have been a field day! I don't know how you put up with the sink problem for so long. He should have done it free!

Fraussie: Well so far we haven't had a bill...