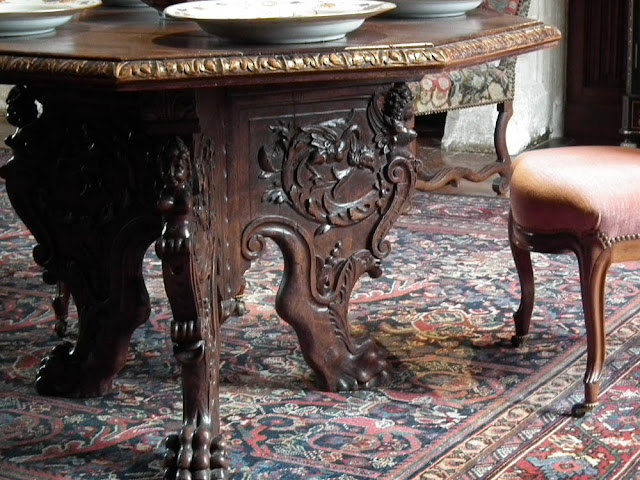 A la cuisine hier: Raspberry coulis. The raspberries came from our orchard neighbour, who picked them yesterday evening. They were over ripe and he made sure I knew I must cook them immediately. He said there was une livre in weight (a pound) in that old fashioned way they have here and they were €3. You do not ask for un demi-kilo of fruit at the market, that will not be understood, although you can say you will take cinq cents grammes.

Liqueur de noix. This is what the Italians call nocino and many people know it by that name, not realising that the French make it too. In the Touraine the green walnuts are ready in mid to late July for making this magic elixir. This year I was nearly too late and some of the shells inside their green overcoats were a bit more woody than I would have liked. I haven't been able to make it since 2009 due to a lack of suitable walnuts. My original brew has almost run out. It was a traditional recipe but this year I have got a bit adventurous and the mix is 10 green walnuts, chopped (cue walnut bits whizzing all over the kitchen), a used vanilla bean, half a star anise, 5 mixed peppercorns, ½ cup orange syrup, ½ a cinnamon stick, ½ cup white vermouth, 1 cup vodka. Now it gets to sit on the bench festering in a jar for a couple of months. Theoretically it should be ready for Christmas, but if it is anything like the last lot it needs 3 years to really round out the flavours and be drinkable. It's useable after two, as an addition to other things for a hint of indefinable nut flavour in cakes and desserts or poured over icecream, but the real test is if you can drink it straight and genuinely enjoy it.

8 jars of Sour Cherry and Redcurrant Jelly. The combination is much nicer than either fruit on its own, a totally zingulatory experience (sorry non-anglophone readers -- that isn't a real word, I just made it up...) Think sour rainbow straps, sour worms or bonbons aigre-doux.

Fried Rice. I often cook extra rice for a meal so that I have leftovers for fried rice the next day. By the way, has anyone noticed that ordinary long grain rice is almost impossible to get in France now? This is only a recent phenomena, of about 6 months. I can only easily get fragrant Thai and stupid parcooked long grain (what is the point, why is it yellow and why does it take the same amount of time to cook as regular rice?). Basmati is getting less easy to obtain. When I can get ordinary long grain, it is different to what I used to get. The new rice doesn't look as good, is fatter, seems to be more fragile both cooked and raw and breaks up easily. Does anyone know what is going on?

A badger (I presume) has dug out a Red-tailed Bumble Bee Bombus lapidarius nest in the ground by a fence post. There is a neat hole about 30 cm deep and 20 cm in diameter, with a number of dead bees at the bottom, and some more bodies in the excavation material. The nest is still clearly operating at some level though, as half a dozen bees entered and left by two different entrances as I watched.

No one really even got close, although chm's guess that they might be stoneware (faïence) was good thinking. So, no points to anyone. Better luck next time!
Posted by Susan at 09:00

For American Long Grain rice... dry in packets... use LIDL!

Tim: I did, and it's the same short fat grains with an opaque starchy germ that I can get in LeClerc, not the nice long slender translucent well behaved grains I like.

Is this your friends' Château Gondrelle? The material these soup dishes are made of is probably faïence rather than china. No way to tell were they were made.

Ever try pickling green walnuts?
One of my favorite condiments,
especially with cold meats. Not
available here in the grocery.
Lots of good rice, though.

Susan, not their regular rice, which is more like the Camargue type...
the American Long Grain Rice whenever they have an "American" themed food promo...
that's when I buy smooth peanut butter at reasonable price and good flavour!
Personally, I prefer to get Basmati rice from them...
not heavily scented like Thai...
and they do a very good Arborio whenever they do an Italian themed event!

chm: no, it is not Chateau Gaudrelle, but Azay-le-Rideau and the bowls are porcelain, made in China.

Sheila: no, I'm not keen on them and Simon has never expressed a desire for them, so I've never made them.