Esca is a fungal disease that is hitting the Loire Valley vineyards hard. Many winemakers have lost thousands of vines over the past few years. There is no currently available effective treatment for the vines once they have the disease and it has the potential to turn into a crisis of Phylloxera scale proportions (when at the end of the 19th century a root aphid which introduced a fungal disease nearly wiped out the French wine industry).

Part of the problem is that the disease is actually caused by a group of closely related fungi. The only treatment that kills them, sodium arsenite, is a known carcinogen and so toxic to all living things it is too hazardous to use and has been banned. At present it isn't even sure how the fungi are transmitted -- whether they are soil, water or air borne. However their means of transport, they enter the plant at the level of the graft, and affect the root stock. The vine reacts by blocking off its vascular system, but the fungi propogate rapidly and very quickly the plant kills itself by blocking so many of its sap runs that it starves. Typically the leaves turn yellow with a characteristic pattern.


Removal of affected 35 year old vines in Vouvray. The remains were burnt, but these vines were only middle aged, so it is a blow to have to replace them. Photo courtesy of Chateau Gaudrelle. 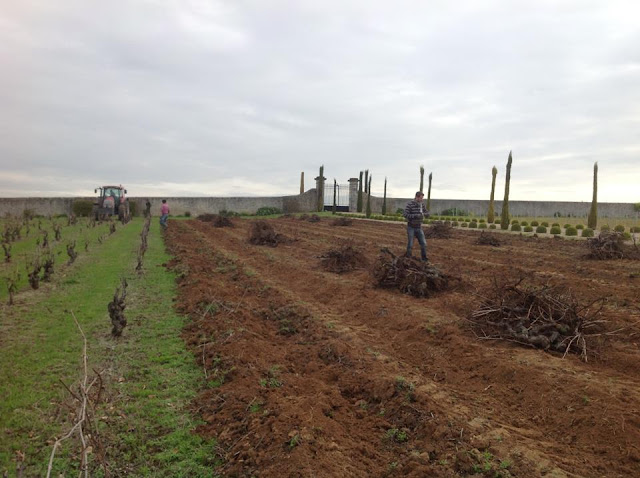 The French National Agronomy Research Institute (INRA) is working on finding a solution, and has clarified what the symptoms are and identified the specific organisms concerned, but a cure is proving elusive. At the moment, it seems that inoculation of root stock with the oomycete Pythium oligandrum may have promise. This organism is a parasite of many harmful fungi as well other undesirables such as Botrytis and Phytopthora. It not only directly parasitises the fungi but causes the vines to react by stimulating healthy growth and chemicals to defend against pathogens. 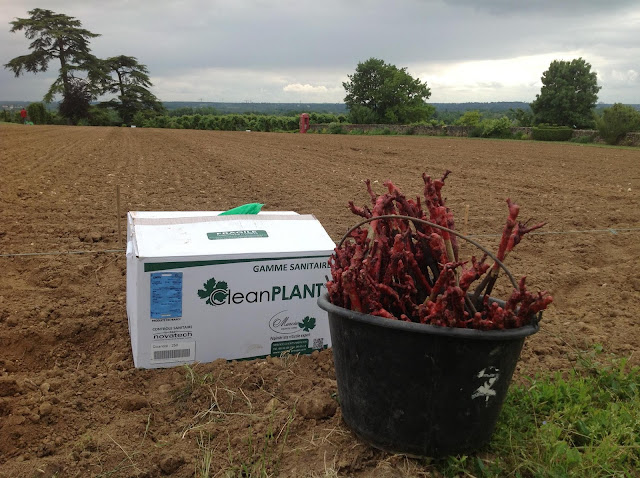 In the meantime, winemakers are turning to all sorts of alternatives. Some are planting wild leeks amongst the vines, in the belief that their associated mycorhiza can combat the esca. Others are 'playing music' to the vines, using devices which send out periodic audible tone patterns which the inventors claim disrupt the proteins of the esca fungi and prevent them from growing.


Charles and I discuss the Genodique 'music box' in the cellars of Chateau Gaudrelle before it goes out into the vineyard. I am extreeeeeeeemely sceptical... 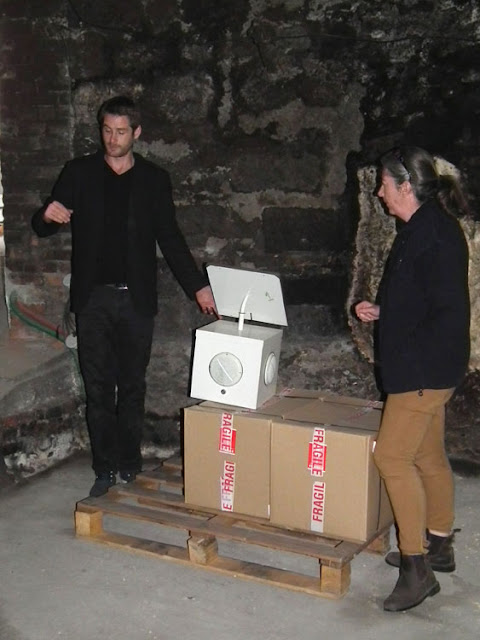 My reading suggests that soil conditions play a part, and parcels with residual herbicides or vines that have had their soil microbia disrupted are particularly at risk. Another risk factor that most people agree on is when a warm wet spring is followed by a dry summer. This type of weather pattern always seems to cause a serious outbreak of esca. Once the disease is detected in a parcel of vines, those vines and their infrastructure are removed and new vines from a nursery that can be trusted to supply clean stock are replanted. The disease can take hold and kill very rapidly (within months) or the vines can linger on for several years with symptoms including yellowing leaves and slow maturing grapes.

Fête Nationale: Simon went to the celebrations in Preuilly, held on Saturday night, and really enjoyed himself so he made a video. There were fire eating zulu drummers, loud, generous and colourful feu d'artifice and the traditional bal populaire, at which the Madison was danced to Just a Gigolo well into the night. And in case you are wondering, only anglos refer to Bastille Day, and lots of communes hold their 14 juillet Fête nationale celebrations on the eve.

I picked 5.5 kg of sweet yellow cherries from the enormous tree on our orchard neighbours' plot. We ran into her the other day on the way to the pool and she suggested I help myself, although warned me that they were full of asticots (maggots). It's true that some of the fruit had the tell tale shadow under the translucent skin that indicates it is infested with cherry fruit fly. However, most of them are pretty well perfect. I've set aside some to eat fresh and Simon has make an Asian sauce (basically plum sauce but made with yellow cherries instead of yellow plums). I'll take a small jar around to her in a few days. Even if she doesn't cook Chinese food, it will go well with cheese.

Yellow cherries aren't grown commercially, but they are widely grown in gardens here. The theory is that the birds don't notice they are ripe and ignore them. I don't know what variety this one is. It turns butter yellow when ripe. Our yellow cherries are Coeur de Pigeon and Napoléon, both of which get a rosy blush when ripe, so the birds aren't fooled at all. They also ripen much earlier and it seems to me that this is the real key. Birds get an awful lot of early and mid-season cherries, but leave the late ones. I think they've got tired of cherries and have moved on to something else.

Susan We are ENGLISH!!!

We saw this same drum group earlier in the day in Luze.

The theory is that the birds don't notice they are ripe and ignore them.
Pauline thinks that this is the same with our "Blanka" Whitecurrants...
what ripe redcurrants, that were left, have been stripped...
the late red is beginning to show signs...
but the Blanka is laden and untouched...
so we are good for whitecurrant sorbet and golden currant vodka this year.

As for your bottled ones... don't bother with sunshine or moonlight... clamp the lids down and tuck away in a dark, cool place for at least six months, preferably eighteen or longer!!

Those loudspeakers sound a bit like "crystal therapies" and "golf ball detectors"... and just what are the tones going to do for the wildlife that relies on sound?
Balderdash and poppycock!!!!
At least it looks as though it is solar powered...

C&E: You may be ENGLISH but I'm Australian and we are both anglos (= anglophones).

Mary: Luzé eh? Does that mean that is where C&E were too, as they have pics of the group on their blog in a mystery location...

Yes, I know that you are making liqueur....
the comment was about making liqueueueueueurs from anything frooooootytoooty!

If you leave the tops unclamped...
or even worse, open!...
you will lose aromatics along with the alcohol...

Small vignerons in my (old )area are convinced esca is encouraged by the high levels of chemicals used...levels encouraged and almost insisted upon by the regional syndicates.
They have some backing for what they say as there a few plots still kept clean by horse and plough; the earth between the rows pushed up over the roots in winter, and pulled own again in the spring...soil aerated and weeds kept to a minimum.

I'd heard of thr wild leek idea, but have no clue whether or not it would work.

Fly: I think that is the likely primary cause too. It's the residue left from decades of overuse. Usage is currently going down, at least in the Touraine, but the damage has been done and it remains to be seen how long the recovery will be. So far the evidence is all anecdotal though, and there is esca in plots that have never been treated and no esca in plots that are still having herbicides poured on them, so it is more complicated than just herbicide residue. I think the leek guy is kind of on the right track, although I can't work out what species he is using and I am dubious about the introduction of a species that isn't native to this area being of any use in the way he thinks it works.