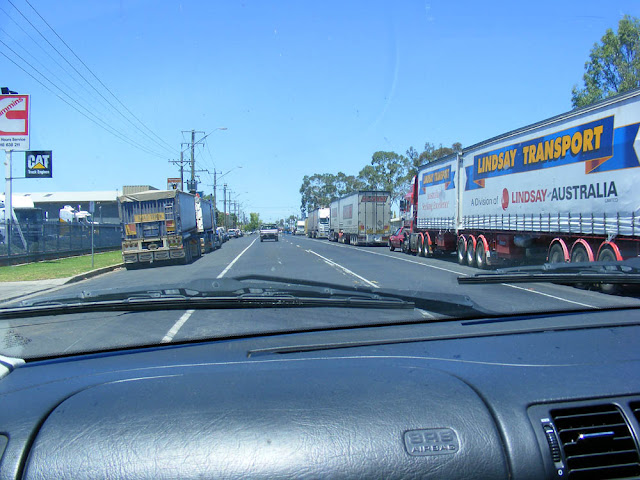 B-Doubles parked on the roadside in Dubbo at lunchtime.
(The western plains of New South Wales, December last year.)

Roadtrains, that is to say, multi-trailered articulated trucks, are a fairly well known Australian phenomenon. In the years that we have been away they have come to dominate the roads as never before. The trucks are getting bigger (now the largest in the world) and they are being allowed ever closer to urbanisation. In Queensland and New South Wales they are limited to 35m long, but in the Northern Territory they can be 55m long. 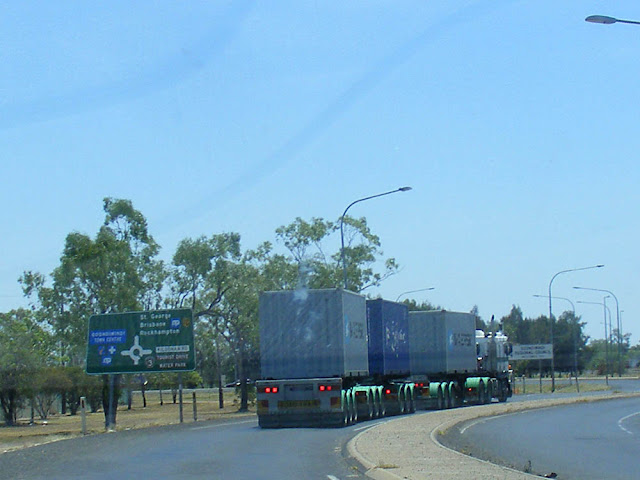 A roadtrain of the type known as a triple.
We followed him out of Goondiwindi on the Queensland / New South Wales border and later encountered him creeping along at walking speed with one of his many wheels on fire.

Everyone on the main rural roads is limited to the speed of the roadtrains. You can't pass them because you rarely have enough visibility ahead to do it safely (due to heat shimmer), and even when you do, the roads are not quite wide enough to pass a gently swaying roadtrain. The roads are often on levee banks because the land is flood prone, there is no hard shoulder to speak of, and the bitumen ends abruptly in a sharp drop off. The roads are all undulating because of damage caused by the heavy vehicles and in some places because of retro installation of culverts. The biggest trucks are nearly 200 tonnes, although most are about half that weight. The roadtrain drivers' technique for staying stable is to ever so slowly increase speed all the time, which straightens out the trailers. Slowing down is done very gingerly, because of the risk of jack-knifing. Never argue with a roadtrain... 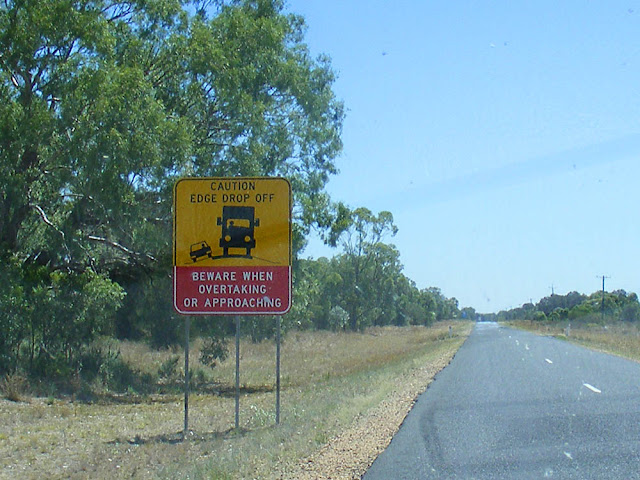 Surprisingly, this makes driving these roads a very pleasant experience (if you discount having to spot emus, kangaroos, feral pigs and goats or domestic sheep and cattle with a death wish on unfenced roads). Everyone just puts on their speed limiter or cruise control and hums along for kilometre after kilometre. This is in complete contrast to the insanely hyper city driving in Australia. We nearly got collected in Canberra because we stopped for a red light -- the car behind us had to swerve wildly and dash through. Clearly it is considered ridiculous to stop unless the light has been red for some seconds. Everyone drives with their foot flat to the floor, alternating between accelerator and brake. 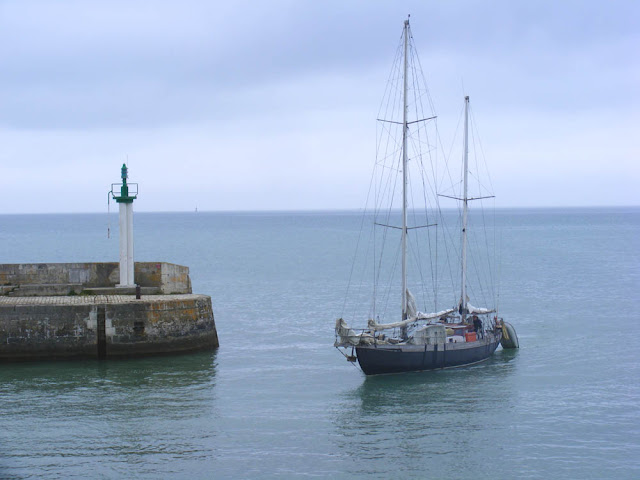 ******************************************************************
Orchard News: The paulownia has lost a few small branches in the storms, and one of the nectarines has lost the half dozen almost ripe fruit it had. I've propped up a branch of the laden old nectarine by the potager gate, as well as a branch on our Melrose apple. The Reine de Reinette apple has lost some fruit, but none of the other apples have and neither have the pears. I picked the last worthwhile sour cherries, so that's cherry season over for another year. I'll make a last precious batch of sour cherry syrup, and some pectin with the windfall apples. One of the cherry tomatoes has some colour, and they have survived the wild weather very well. The front of last year's compost bin has collapsed. The whole orchard was strewn with poplar leaves, which have come from the plantation by the river, a good 200 m away.

Up at the house the c.2.5 m tall hollyhocks have all taken a dive and I have tied them up in preparation for the next round.
Posted by Susan at 09:00