There's been a lot of fuss made in the international English language newspapers recently, claiming that the French finally have a word for 'French kissing'. The French themselves are quite surprised to hear this, since they've been using the verb galocher in the sense of 'snogging' or 'sucking face' for decades. The origins of the expression probably come from associating the slurping, squelching sounds made when walking in galoshes to that of passionate kissing with tongues. If you want to be more elegant in your language in French you use embrasser. My reading suggests that what seems to have changed is that galocher has appeared for the first time this year in the most widely used abridged dictionary, le Petit Robert. It's been in the big Robert for years. 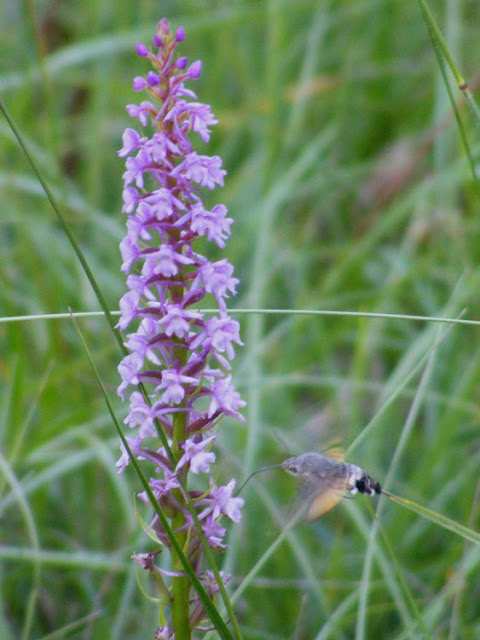 Anyway, all that is just an excuse on my part to post some photos of a Hummingbird Hawk Moth Macroglossum stellatarum giving some tongue to a Fragrant Orchid Gymnadenia conopsea. These photos were taken on 30 June near the Mary Chapel in the Bois des Prêtres at Boussay.


In this photo you can see that the proboscis is actually in two parts. 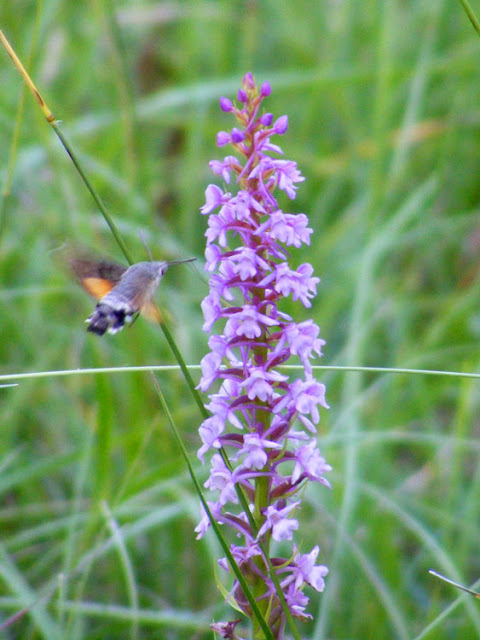 Fragrant Orchids have long spurs full of nectar and give off a scent to attract long tongued insects to them for pollination. Studies have shown that the Hummingbird Hawk Moth is one of the most important pollinators of Fragrant Orchids and that the orchid is very successful at attracting pollinators, with three quarters of flowers being fertilised and setting seed. It is certainly a species that, although local and restricted to certain sites, is thriving in the Val de la Claise Tourangelle.

Mind you, this moth wasn't getting close enough to pollinate the flowers. Its tongue is longer than the flower's spur, so it doesn't have to land and poke its face into the flower. I suspect this is the reason that another, night flying hawk moth is the top pollinator, with the day flying Hummingbirds coming in second. 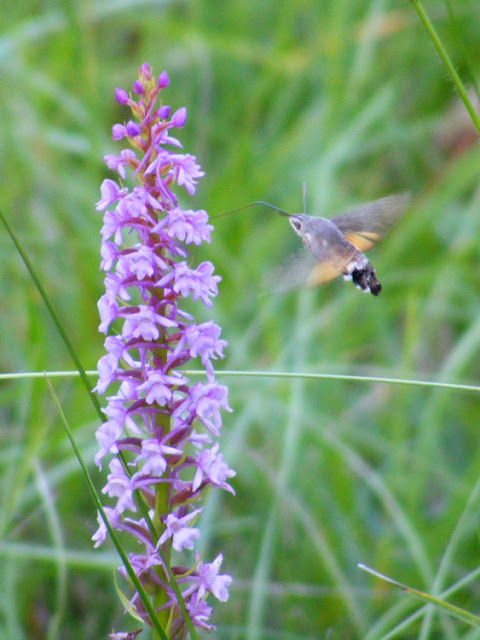 Technically the 'tongue' is a proboscis, made up of a pair of gutter shaped parts which link together to make a tube. The moth expands and contracts a sac in its head to create suction and nectar is drawn up the tube. The precision they achieve with controlling the long extended tongue is mind blowing. When not in use it coils up neatly and sits tucked into a slot under the moth's 'chin'.

*************************************************************
Weather News: After a couple of weeks of non-stop dry sunny hot weather it at last built up into a terrific thunderstorm last night. Lots of thunder and lightning, but best of all, a significant downpour which will provide much needed refreshment to the land. It's amazing after all the rain we've had in the first half of the year how quickly the rivers have come down to their normal summer levels with this recent relatively short dry spell.
Posted by Susan at 09:00

It seems that the slang expressions 'rouler une pelle' and 'rouler un patin' go back to the 19th century, whereas the synonym 'rouler une galoche' originated much later in the 1930's. I'm not sure of the origin of the latter expression. What is called French kiss would be translated as the non slang 'embrasser sur la bouche' since, in France, you NEVER kiss somebody on the mouth in any other context!

'Rouler une pelle' was the expression for French kissing that I heard most often among young Parisians in the 1970s. Also 'rouler un patin'. I'm not sure I've ever heard 'rouler une galoche' but if I have maybe it went right over my head.

Great excuse for a nice set of pix...
and Hummers are some of the nicest to photograph feeding.

Useful comments to from chm & Ken... although I don't really know where I'd be dropping that info into a conversation...

chm: I think the galoche version is just a more modern take on the patin version -- after all galoshes and pattens are more or less the same thing (or at least, have the same purpose).

Ken: I don't think I've ever heard any of these expressions in conversation (too old to be discussing snogging I guess). They seem to come up more or less equally on forums if you look them up. Personally I like the galocher version best.

Thanks to both of you for your additional comments and experience.

we have those hummingbird moths here in western NC....I love watching them

The hummers are our favourites to, I could spend all day photographing them. Great.

The hummers are our favourites to, I could spend all day photographing them. Great.

Being used to hummingbirds in California, I was surprised the first time I saw hummingbird moths here at Saint-Aignan. They appeared to be the smallest hummingbirds ever. But they turned out to be moths.

The 'patin' in 'rouler un patin' is probably a roller skate, not a slipper, according to what I've read. There's some confusion about 'rouler à patins' and 'rouler un patin à quelqu'un.' Still, 'pelle' was the word I knew way back when.