Yesterday was the Fête d'Automne in the nearby village of le Petit Pressigny, home to our stone mason and our nearest Michelin starred restaurant. The festival has a well deserved reputation as being a cut above the average. Stalls selling artisanal foodstuffs in the market place are combined with artists displaying their work in gardens and barns all over the village. Le Petit Pressigny is tiny, so you can easily visit all the artists on foot, then come back to the market for a bite to eat. We opted, as we did last year, for pizza made by the people at the house on the hill, cooked in their 19th century wood fired bread oven. Then we had freshly pressed apple juice and some pâtisserie.

The view from behind le Petit Pressigny, looking out over
the valley it nestles in. 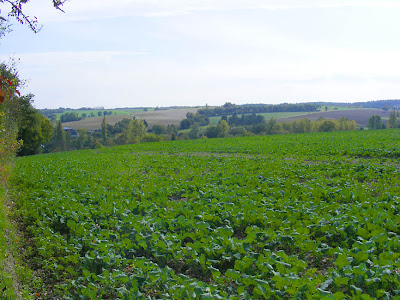 I discovered this elephant in a garage. It's not one of the
exhibits and it's not in a room. 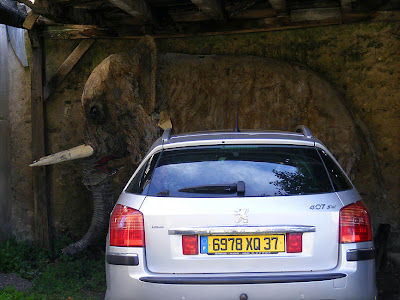 Jacky Dallais' Michelin starred restaurant La Promenade, below. A 'two course' menu (which is actually entrée, main, dessert and amuses bouches) is €40 and the wines start at €19. It's extraordinarily good value. 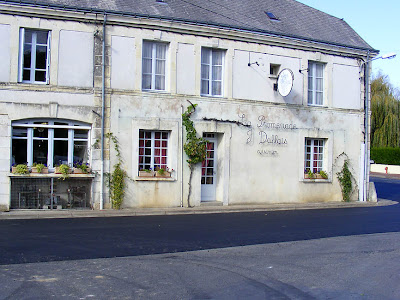 We ran into quite a few people at the event, so it was pleasantly social.

First was Keir and her husband and their Bearnaise Mountain Dog, Grace. Keir is a blog reader who lives in the next département and recognised us from the blog although we have never met before. She had read Jim Budd's reminder that the event was on and remembered our report from last year and thought this might be a nice way to spend the day, especially as Grace doesn't like gunshots and Sunday is hunt day in Loir et Cher.

Then Sweetpea from the Village de Vaux blog, who was there on her own as husband Captain Sensible is away organising new windows for their current renovation project. Bloggers Tim and Pauline were next on the scene and we discussed the identity of a swarm of black and yellow flies they've been having. After that, Nicole and Alex, who run a gite complex and gardening business. Alex did our apéro terrace and back garden, as well as repairing our front courtyard with reclaimed cobbles.

There was Angélique, who runs a mobile organic grocery service, Madame and Monsieur C (he's on the council and they are both lovely people), our stone mason Monsieur Douady, Parisian acquaintances Anne-Marie and Bertrand (she observed that there was a lot of English being spoken in the street and she felt a bit like she did when they were in America, as she doesn't speak any English at all) and just as we were leaving, our neighbours Christine and Guy.

Email ThisBlogThis!Share to TwitterShare to FacebookShare to Pinterest
Labels: Events, Food and Drink, Towns and Villages near Preuilly

Sounds like we missed a real treat - again! We've decided that next year we will be there even if it is a very busy weekend getting there and back. Perhaps we will bump into you there too....

It sounds like a great day. And I'm still laughing at the idea of seeing that elephant each time whoever owns it drives into the garage. Better than a tennis ball hanging from the ceiling as a way of showing you where to stop.

Keir told us that she and John were really happy to run into you at Le Petit-Pressigny. I think they enjoyed the festival.

It's a great idea for a fete, and deservedly popular. Well worth spending the day.