The Glanvilles Settle in for Winter

For butterflies to survive the winter they have to hibernate, or at least seek protection. A few, like Red Admirals and Peacocks, hibernate as adults, clinging to walls inside barns and garden sheds and hoping not to freeze. Some hibernate as eggs, hidden deep within the larval food plant, and others as pupae, ready to hatch at the first hint of nice weather in the new year.

A Glanville Fritillary butterfly feeding on Wild Oregano
Origanum vulgare (or l'origan in French) in August. 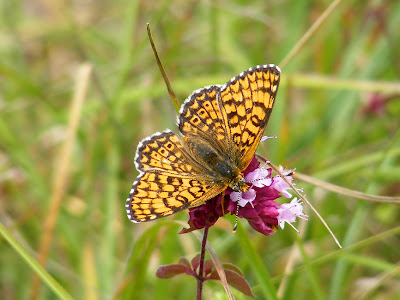 A few don't actually hibernate, but spend the winter as caterpillars. When it's warm enough they munch their way through a leaf or two, but if it gets very cold they go dormant until the freeze is over. Of course, they don't go about in the open in the middle of winter. They huddle together in groups, protected by leaves and a web which they produce to keep the cold and predators out.

The inside of a Glanville Fritillary butterfly 'creche'
(rather a lot of caterpillar poo!) 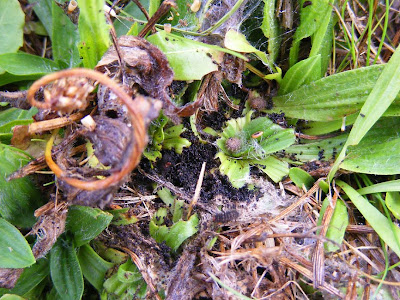 The Glanville Fritillary Melitaea cinxia (la Mélitée du plantain in French) is one species that overwinters as a caterpillar. They are common in our orchard, and when I was mowing the other day I accidentally disturbed one of their 'nests'. It gave me the opportunity to photograph the inside, with caterpillars in several stages of development. I covered them back up again as best I could and hoped that they can repair the web. 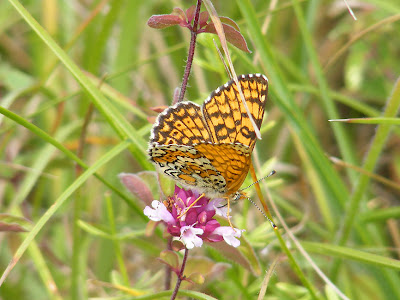 Glanville Fritillaries produce two generations a year and lay their eggs in clusters on the underside of Plantain leaves, where the caterpillars hatch out and live communally in their homespun silk nest. When the caterpillars are mature they are red headed, but young caterpillars are pale ochre with dark heads. You can see both in the photo above. The young ones greatly resemble the plantain flowers in the spring. The species seems to benefit from traditional agricultural practices, as the nests are often found in fallow land and along rural tracks where the roadside vegetation is full of plantain.

Adult males often sit with open wings on these dirt tracks, or on the tips of grass seed heads. They are assertive, agile and rapid flyers, and quite agressive to one another.

I did not know that they lived for more than one season. What is their life span?

Diogenes: Many butterflies produce more than one generation per year. The late hatching ones overwinter as adults, and so can fly very early in the new year (or indeed, any sunny day in winter). Each individual will only live for a few months at most, with hibernating species reaching 6 months I suppose.