Yesterday afternoon Preuilly's population doubled and the average age halved, as 700 teenagers from colleges in the area descended on the plan d'eau for an inter-communal sports day. Students from Preuilly-sur-Claise, Ligueil and le Grand Pressigny were divided into two age and gender groups (12-13 and 14-15 year olds, boys and girls) and competed to run a course starting at the plan d'eau, out past the swimming pool, around along the river, back through the campground and down to the start, then around again - probably about 400m just over 1.5 km (1 mile or so). 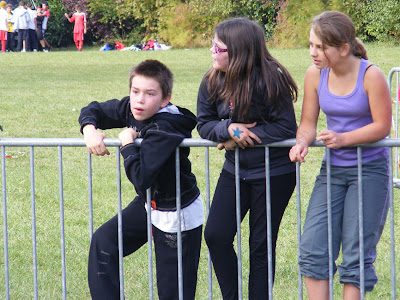 Whilst it seemed to be compulsory to participate, there was obviously no requirement to take it terribly seriously. Most of the kids were wearing 'warpaint', many of them with the initials of their school painted on their cheeks and hair dyed (probably a team colour). Some kids were more sportif than others and ran the course easily and eagerly. Others were less comfortable and were coaxed around by energetic teachers on bicycles or running themselves. After they had completed the course, each runner got a drink and a piece of cake and milled around with their mates. 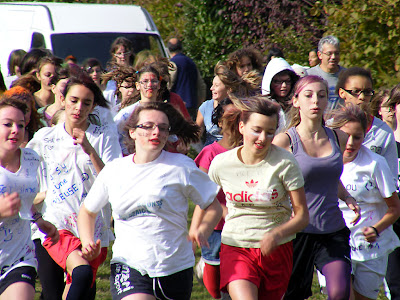 We cheered on our neighbours' children, and anyone between races stood on the sideline shouting Allez Preuilly ! Allez Ligueil ! Allez GP ! according to their personal allegiances.