So - what effect is the strike having in Preuilly sur Claise?

It's hard to tell, really - the town is always so quiet that it is difficult to notice when things get less noisy. Step out of our door any day, and the loudest thing you will hear is birdsong, the occasional sans permis or moto with engine screaming at 35kmh, and in autumn, a chainsaw or two.

We do know the fuel situation at the local garages isn't very good: on Thursday last week there was a queue at Intermarché where normally there is no queue and the garage at the top of the hill has no diesel, but we filled the car on Saturday with not too much difficulty so we should be right for at least a month. The supermarket fuel pumps were acknowledging a potential problem by posting notices saying pas des bidons (no jerrycans) and that the 24/24 facility had been switched off to prevent people stocking up in the middle of the night. We heard from a neighbour that someone took 2000 litres of diesel from the pumps in Preuilly in the middle of Saturday night - presumably a desperate farmer. He must have had to go around about 15 times.

In Yzeures this counts as a long line 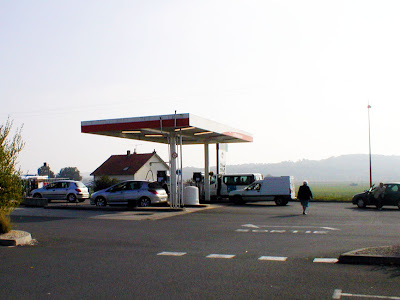 Our post is still being delivered, and on Wednesday we had some light fittings delivered by UPS. We are also expecting another delivery today (this time a seche serviette for the attic bathroom). Susan paid our tax d'habitation and prélèvements sociaux at the Mairie without any problem, and the only time the local schools sent students home was when one of the teachers was off sick.

At the Market yesterday all the vendors were present and correct except for the fruit lady from Coussay le Bois, and the supermarket seemed to be suffering no shortages except for on the fish stall, half of which was taken up by bacon lardons so as not to look empty.

So, even though the strike looks serious when you see it on the news, so far it hasn't has a huge impact here. The longer it goes on for, the more obvious the signs will become, but as long as the boulangerie doesn't run out of bread and the laitière keeps milking the cows, we have the staples covered.

Good to hear you are not being affected by the strikes.
Are you able to siphon fuel from Celestine ? If you have any tours booked you might be able to fill her up, siphon it out into jerry cans and fill her up again, it would give you some back up if it goes on for too long.

Is it time to read up on how Célestine's predecessors were fuelled by gasbags on the roof?!

Margaret: luckily Célestine is having a quiet time, so we haven't got a problem yet

Autolycus: purely coincidence, but I was reading about gazogene only the other day. Where do you buy coal these days?