The Gift of Literacy

Susan mentioned yesterday that I had been inspired by a recent dose of Tintin comics - which isn't true: I haven't read a Tintin comic for at least two years.

I have, however, joined the bibliothèque as part of my birthday present from my parents. This is part of my attempt to learn myself French. There doesn't appear to be any point trying to teach me French as it doesn't seem to go in, and anything that does go in goes out again almost instantly. If I can learn it without noticing it might stick, so I am borrowing books and trying to read them. The pictures help, and I can borrow a whole series of Bandes Dessinés (comic books), which count as one book.

Not a Tintin book to be seen 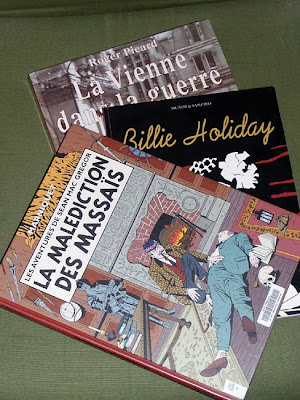 Membership of the library is 15€ a year, and I can borrow three books, one CD and one DVD at a time. I forgot to ask how long I can have the books for, so I will have to trot out some mangled French (which the very nice librarian lady works hard to understand) and ask. 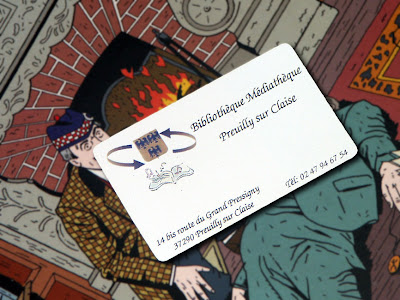 Bandes Dessinés are extremely popular in France (and Belgium) and are seen as just as valid as "proper" books. They range from Tintin, Lucky Luke and Asterix to reworked classics and serious history. In January the Festival International de la Bande Dessinée is held in Angouleme (in the Charente) and attracts about 250,000 people every year.

The ancestor of the so-called "bande dessinée" or BD is "Images d'Épinal' or images from Épinal, a town in the Lorraine region of north-eastern France. Images d'Épinal was founded in 1796. Here is a link in French:

Did Susan ever take the French
classes which she said were
being offered by the Mairie --
last winter, I think?

Sheila: The reality of the free classes is that the local authority is obliged by law to offer them, but they don't really want to run them. Consequently, the classes in Preuilly are never advertised and whenever I ask about them, they 'don't know when they will start'. I might be eligible for classes in Loches, which is a bigger centre, but we opted for private lessons in the spring, and now my strategy is to spend one evening a week with a French friend, working on translating the blog.

When I lived in Montreal, I found the lack of English TV (at least in those years) to be a big help - all I ever heard was French.

Roadsigns are like BDs - you look at the shape and the pictures. We don't have TV here - it has just gone all digital and we don't have coverage in Preuilly. Not that the French television I have watched hold much appeal (except at xmas, when the circus is on!)

The neighbour says I am getting better, but I do have my off weeks...

I don't want to discourage anybody, but the reality is that it takes about 10 years of constant effort to become fluent in another language. Progress seems very slow for along time, but you have to keep working at it. Sounds like you both are, and that's good.

I'm not sure translating is the best way to learn, but then why not? That's how they used to teach foreign languages in the schools decades ago. Reading is good practice, but listening comprehension is probably the most important skill to learn. After that, the speaking will come along... slowly.

Figuring out the sounds and rhythms of the foreign language, for listening and speaking, is essential. I'm a firm believer in TV and French music as some of the best tools. Especially songs, which really teach you the rhythms of good French, as well as a lot of cultural references.

Ken: I think you are absolutely spot on. At the moment, the advantage of translating, for me, is that it drums in the grammar, and it gives me a real project in manageable blocks on subjects I'm already familiar with ie one post at a time.

I would like to watch more French TV, but we don't have the satellite connected yet. I can mostly follow Asterix and Maigret, which we have downloaded, but Simon struggles. This means that for me it is a fun exercise, but Simon gets bored. Since TV is something we do together in the evenings, it is difficult.

Lots of people recommend listening to songs, and I was really dubious, because English language songs are frequently unintelligible. But in French it's different, and surprisingly easy to follow. I'd like to listen to more radio (France Inter is good) but our reception is rubbish.