Throughout the Touraine there is a network of tracks, giving public access to forests, agricultural land and riverbanks. These tracks are unpaved, and often hundreds of years old.

In Australia they would be called dirt tracks, but here they are les chemins blancs, because the calcareous rock and soil they are made from is white. Much of the famous pilgrimage route to Santiago de Compostela, which runs through Tours, is via chemins blancs. Occasionally you see them referred to as les pistes blanches. 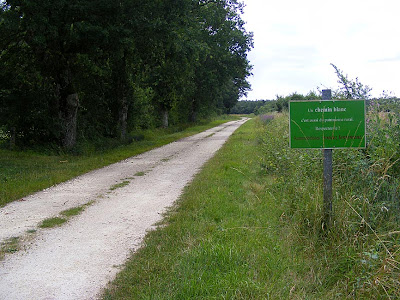 The term seems to be a quite specific and descriptive one. There are also chemins herbeux (grass tracks) and chemins forestier (forest tracks). In some places, where the soil is different, the chemins are rouges, not blancs.

They are very popular with mountain bikers (les vététistes in French, from vélo tous terrains or VTT) and in September every year there is a 30km night bike ride known as la Piste des lucioles (the firefly trail) from Mont-près-Chambord, so called because the riders career through the forest lit only by head torches.

It looks like a lovely place to cycle but I am not that keen on off road! Diane

I would love to MTB or VTT on those roads - maybe next time I'll take Simon out for some exercise - what say you Susan?

What a lovely header picture. And the chemin blanc makes me want to start walking.

In French-speaking Canada, "les pistes" means path, like bike-path, but I have also heard the ski-slopes called that.

My bike has a flat tyre (and the pump is broken), so I won't be able to go cycling with Leon :¬((