I mentioned yesterday that we are now working on the office, and we are replacing the window therein. This has thrown a curve ball at us, and although it is a problem we could do without, I am glad we noticed. 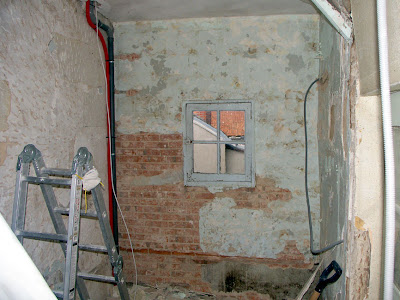 Yesterday morning Stéphane removed the last of the tiles from the old bathroom wall, only to discover that the window has no lintel. This means that the window, complete with its 2mm thick old glass, has been structural and holding up 10 courses of brickwork

Neither of these windows have a lintel.
The old bathroom is the upper window 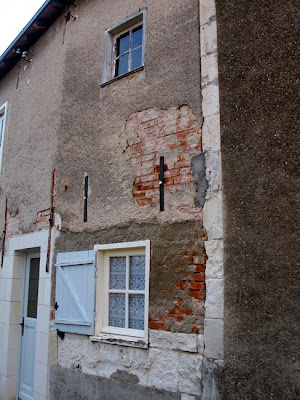 This meant we had to cut out a course of brick above the window, and replace it with a piece of solid wood. Luckily we have the piece of poplar that was previously the lintel to our old back door, so this was cut to fit and reused.

Cutting out the bricks. More dust..... 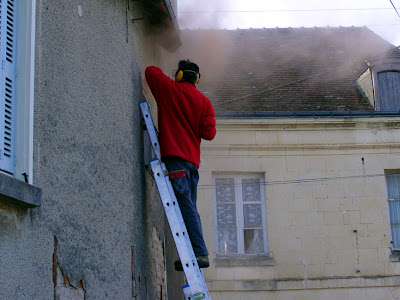 By lunchtime we had removed half of the bricks and slid the lintel into position (on the diagonal) and then cut out the rest of the bricks.

Stéphane says it's fun to stay at the YMCA 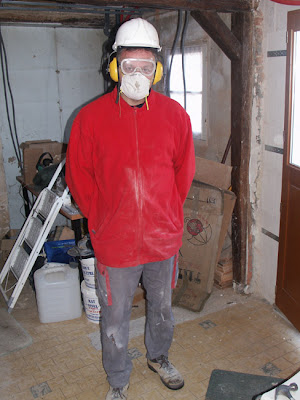 After lunch the rest of the bricks were removed. the lintel inserted and chaux'd in place. On Monday we start building a frame for the wall and tying the bricks back to it (much in the same way we did with the garage earlier this year). This is necessary because the brickwork isn't tied in to the older part of the house, giving us in effect a brick curtain wall that doesn't attach to anything.

The lintel being cemented in place 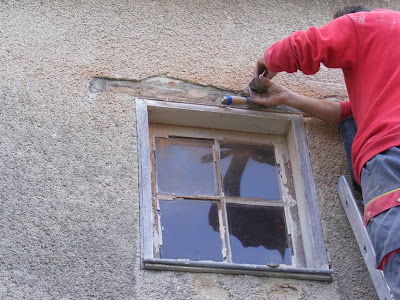 This has meant that insulating and wiring the office will take at least two days longer than we planned for, but I like the reassurance of knowing the wall is less likely to fall out one day.

Renovating an old home is always full of surprises, isn't it?

Just lucky you're not in an earthquake zone.

Surprises is one word for it. Ahock is another.

Jocelyn - rarely do we have earthquakes here. It wouldn't take that much though! I can only assume the last people who lived here didn't know, otherwise they would never have leaned a bath against that wall (nor chiselled out half the depth of brick to put in the pipework!)