Last year our grape vine produced a lot of grapes, most of which were out of reach, 10 metres up a Catalpa tree. This year we have determined that the grapes should come to us rather than the birds, and to this end we have built a grape trellis.

We started the process quite a long time ago (those long dark evenings of winter, don't you know), and soon I had what I thought was a workable plan: the idea being to have a grape trellis that also has a section of roofing from which we can catch water. I drew up a shopping list and we hired a truck from SuperU with which to collect the stuff. That worked out more expensive (€44) than having it delivered (€19), but the advantage was that we didn't have to try explain where it was we wanted the stuff delivered to. It also worked to our advantage as the track up to the jardin was waterlogged where the snow was melting, so we could park on the road and take our time unloading and carrying everything the 100 metres or so.
Truck!! 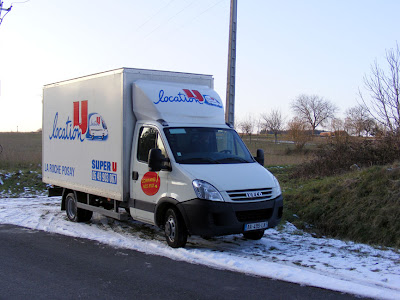 Last Wednesday Alex met us down at the garden, and we started by measuring where the posts would go. This process was long and involved usage of calculators, bits of string, and setsquares. After a few false starts we dug some holes, mixed some cement and put the pied poteau (metal post saddles) in place.

Using a solar powered calculator in winter.
No wonder it took us ages to get things square! 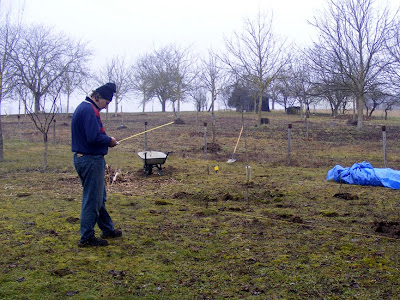 The saddles were left for almost a week, then yesterday morning we all rolled up - and just after lunchtime: voila! an almost complete grape vine trellis. It still wobbles a bit - we need to brace the corners, but all the basics (with the exception of the roof) are in place. Apart from Alex dropping a 50mmx150mm 4 metres long (and very heavy) beam on his own head, it was quite painless.
Almost there 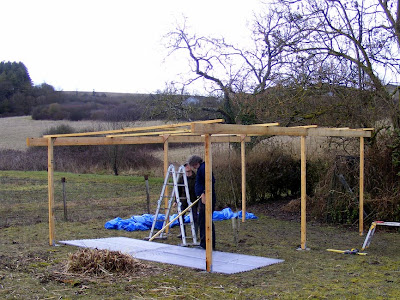 I was really surprised that we had managed to remember to take all the tools we were going to need, the generator fired up and worked faultlessly (even though it hadn't been started since September 2007) and even though it rained, it wasn't cold (in fact it was mild and even warm at times).

Later this week we will "pop down there and just finish it off" then I can fit up the plumbing for the water tanks. This should reduce the amount of water carrying we have to do to water the potager this summer, something that Susan and I will both be most grateful for.

I had to look up "potager" - it's your garden for your kitchen, right?

Diogenes: yes the potager is our kitchen garden or vegetable plot. Hopefully it will save us from starving to death once we've spent all our money on doing up the house!