Local Produce in the Supermarket

Look at all this luscious local food that we bought from the supermarket... 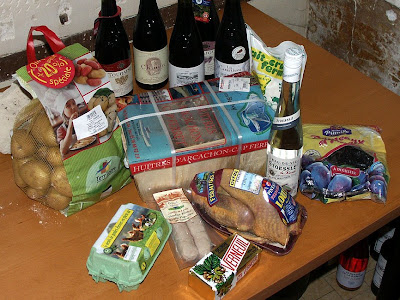 There are eggs from Charnizay, boudin blanc from Tours, butter from Verneuil, guinea fowl from Loué, milk from le Grand Pressigny, wine from the Touraine and Manon potatoes from the Loire Valley. Manon potatoes apparently make particularly good chips/frites/fries. They certainly made nice fried diced potato to go with grilled meat.

We've written about most of these before on the blog, so if you want to find out a bit more, click on the links or use the search facility on the blog (top left). To learn more about the wines of the Touraine, you could go to Jim's Loire blog.

From slightly further afield, there are oysters from Arcachon on the coast to the south-west of us and prunes from Agen, about 450km directly south of us. The prunes from this area are certified as having been produced in the Agen area and considered so much better than any other prunes that it is almost impossible to sell a prune in France now unless it can be labelled as coming from Agen.

The kirsch is from Alsace, far to the north east of us on the German border. I would have liked to get a locally made kirsch, but when I went to the Maison de Pays in the Brenne I was told that their suppliers had stopped making it. There are sour cherries, of the sort one makes kirsch from, in many gardens, both private and public in the area, and a tradition of making kirsch in small scale home distilleries here, but the law has recently changed with regard to these types of operations. Up until a couple of years ago, certain families had a traditional, inherited right to make small quantities of eaux-de-vie. Now, only a few very old men continue to produce these special fruit brandies, and once they die or retire, the only eaux-de-vie available will be either illegal or industrial. It's a shame, and I am sorry to have come just too late to have tasted the local product.

Email ThisBlogThis!Share to TwitterShare to FacebookShare to Pinterest
Labels: Food and Drink, the Brenne, Towns and Villages near Preuilly