s'il vous plait
Everyone knows s'il vous plait – it is the 'SVP' of 'RSVP' on invitations. The 'R' is for repondez and the acronym exhorts you to 'respond if it pleases you' and yes, 'RSVP' is used in France by French people too. Even more commonly used is 'svp' in all manner of correspondence except the most politely formal, instead of writing the somewhat cumbersome phrase in full. Your bank will use it, the local Council uses it, friends writing a note to drop in your letterbox will use it. I don't think anyone just uses the initials in speech though – no point as the phrase in full is probably easier to say ('see voo pleh') than the initials ('esseh vay pbay').

This photo isn't of a please, but it pleases me. (I could be clutching at straws here - I only have one photo of SVP and most of it has already been used in the post about merci.) 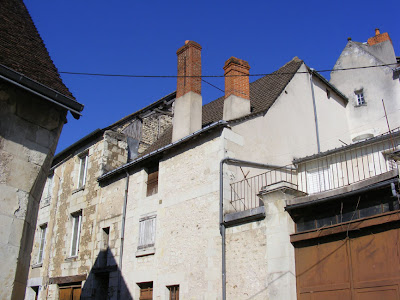 This was taken in the rue des douves on a bright morning in February this year. Except for resizing it, I have not change the photo at all. Usually I would have removed the wiring and made the colours stronger but one thing this photo didn't need was for me to play around with the colour - the sky really was like that.

Please don't ever stop blogging
Your photo's, retouched or not, are wonderful to see

You're too kind :-) It is good to know our efforts are appreciated, Thank you