The Blog Will Not Be Banned!

But all the wine professionals with a web presence in France have had an anxious few days.

Since 1991 the French government has been progressively tightening up on regulations regarding the sale and promotion of alcohol and tobacco. This has been driven by the alarming statistics in France for things like diseases of the liver and deaths due to drink driving. The French lifestyle is famous for being behind the long and healthy lives of it's adherents – low rates of obesity and heart disease, despite all that meat and dairy food. What is less well known is that the incidence of liver disease is above average and the French do not always drink in moderation. 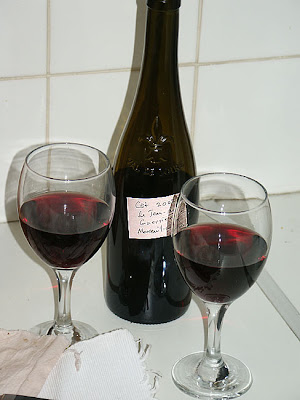 A lot of French people drink a lot, and they drink every day. But they don't binge drink, they take their wine with food, and they don't degenerate into out of control agression, so where's the problem you might wonder? The problem seems to be that the food masks the effect of the alcohol, so their livers are constantly dealing with too much, and eventually give up. There is not always a recognition that driving home after a good meal with wine is not advisable either. As to why there is not the associated violence, this is apparently because alcohol does not cause violent behaviour unless one is culturally primed to expect that alcohol begets violence. In France, alcohol is expected to lubricate lively social intercourse, creating an atmosphere of bonhomie, and this is exactly what it does (if you don't believe me, read Watching the English by psychologist Kate Fox).

So no wonder the government has been concerned and has felt obliged to do something. Some good things have come out of the progressive stages of la loi Evin as it is called. Smoking inside restaurants is banned. Advertising alcohol at sporting events and on television is banned.

But the latest round of legislation was bizarre to say the least. It threatened to ban free wine tasting (so you would have to pay to taste before you bought bottles at a vineyard or cellar for instance). It also threatened to ban any mention of wine on the web in France. Huh !! Was the government insane !! What is the single most famous thing about France? Why, if they weren't allowed to mention it on their websites, were all the regional tourist offices (funded by the government) sending out their envoys in a special 2009 campaign to the rest of the world to promote French wine and the wonderful holidays one can have visiting vineyards, learning about French wine and in the process, absorbing an important piece of French cultural heritage??

I first learned about the looming ban some months ago from Olivier Magny's blog, Stuff Parisians Like. He organises wine tastings and has a website to promote his business, so was naturally concerned, and thought the ban was mad. More recently, Jim Budd on Jim's Loire has been highlighting the issue and providing many good links to French wine professionals' websites. His website has pictures of a number of the protests that have been going on around the country (where road signs for Champagne, Bordeaux and the like have been covered and stamped 'Censored', and banners have gone up on wine retailers facades). Not only would websites and blogs focusing on wine potentially be banned, but any website or blog that mentioned wine, let alone promoted it might have been banned.

This sign could have become illegal -
the photo could have made our blog illegal! 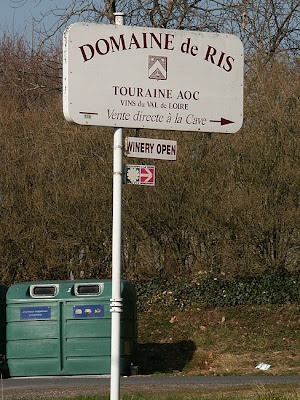 Thankfully, once the legislation was actually voted on, it was amended for more sensible arrangements. Now anyone can write about wine on the web in France, with the exception of sites aimed at the young and sporting activities.

So now I can legally tell you that the bottle of wine pictured in the top photo is a Côt made by one of Ken and Walt's neighbours, Jean-Noël Guerrier, and a gift to us from K&W at Christmas time. Although not a heavy wine, it is quite a rich purply red and tastes the way it looks, with blackcurrant and strong tea flavours. We had it with some of my home cured ham, but I think it would have been better with steak.

I think these Sarkozy people are kind of crazy when it comes to wine. Sarkozy himself makes a big deal out of the fact (?) that he doesn't drink wine at all. Can you believe it?

We all have to die of something. Whether it's the heart or the liver that gives out first, what does it matter? We might as well enjoy life. Food with a glass or two of wine — it's very civilized. And the French longevity statistics seem to indicate it is healthy.

David Cobbold's piece on eccevino on health and statistics is worth reading. He concludes by remarking that we all eventually die and all breathe, so does this mean we should stop breathing to avoid death!

Ken: Sarko's lack of interest in food and drink is slightly worrying and difficult to relate to.

Jim: Yes, I read it yesterday. I thought his perspective as a completely integrated outsider (not an oxymoron, btw) was valuable and interesting.

Would it be to any comfort if I told u that alcohol (and wine) are only sold in 400 shops in Sweden to people over the age of 20 y. and, according to that, the average life here are the same as in France.
Bengt

Bengt: But I assume that the explanation for long and healthy lives in Sweden is all that dill, surely?

Yeah, could be the dill, the rotten fish or perhaps the absence of aussies. :-)
It was actually a honest way of describing that even in Sweden, the most safest land on earth, (as the socialdemocrats have learned us). We don´t get older than the rest of the western Europe though we have the most rigorous traffic laws (over 0.002 % of alcohol in your blood and you loose your licence), the best hospitals, the lowest childbirth deaths, the best social welfare system (where a family of four is considered poor if their income is below 3 000 Euros/month and we have learned that white bread is nono. And, upon all that, the lowest percentage of smoking people in the western world. So why, oh why haven´t we got the highest average life in Europe or the world. Anyone?

Bengt. Good question. Maybe Viking blood is designed for an exciting life, not a long one. Therefore, all those admirable qualities you mention only raise the lifespan to "average"

Wod verification is "wisman", so I am obviously right!

Exciting life under all these exceptions! Safe from the cradle to the grave. France here we come!