Is it a Chapel? 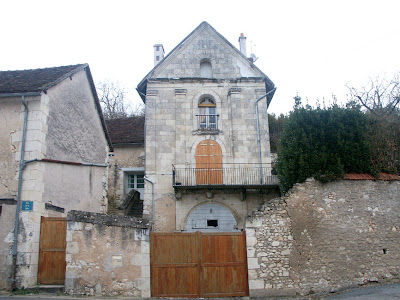 One day when we were visiting Roger Lezeau we happened to mention to him that we had seen a rather odd building at the bottom of rue de la folie in Preuilly. We couldn't work out what its function might have been. He immediately knew which building we must be talking about and drew a rough sketch of the front to confirm it. We asked him if it was the folly that the street is named for, but he said, no, the folly is prehistoric, and on the farm at the top end of the street. He told us the farmer had offered to sell the stones of the 'folly' to the local museum. Roger thought this was outrageous, as such things should be offered as a gift, to benefit everyone. 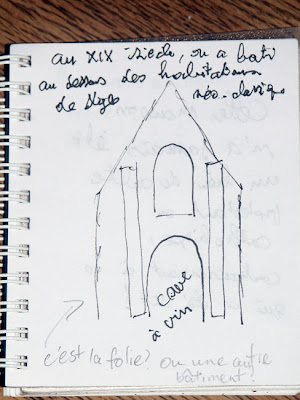 He told us that the building was 19th century, in the Neo-classical style, with accommodation above and a large wine cellar (cave à vin) below. He was particularly keen to dispel any ideas we might have that the building was a chapel, either Catholic or Protestant. It sounded like there is a local myth about it being the long-lost (16th century) Protestant chapel of Preuilly and he was fed up with having to disabuse people. 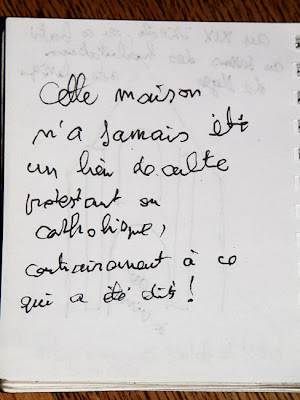 You learn a little more everyday...

I loved the sketches and the " mot de la fin" from this Monsieur !

Our little house in le Grand Pressigny looks as though it might once have been a business at some time. There is the remains of green paint on the walls at the front and holes with metal linings thought to have held up a substantial sign. We have no idea when it was built but more than one person has told us that the date over the door, 1789, was the date of the first renovation, not just the Revolution. It has obviously been through so many incarnations and DIY alterations, that it would be lovely to know a bit more about it. We have no idea where to start though.

That addition over a wine cellar is done in good taste which is not always the case for 19th century "renovations."