Recently I bought a pork loin economy bulk pack – porc longe sans filet mignon sans os caissette – so it came without a filet/ tenderloin and without ribs. This is one side of the mid-section of the pig, from just behind the shoulder to just in front of the hind leg. It weighed 4.2kg and cost €16.40 (€3.90/kg). There was no other information on the label, which makes me suspect that this is industrially farmed pork. I rarely buy meat that has no provenance because of the animal welfare issues, but on this occasion I needed to stock up quickly and affordably. I hope I have done justice to the pig.
It looked like this: 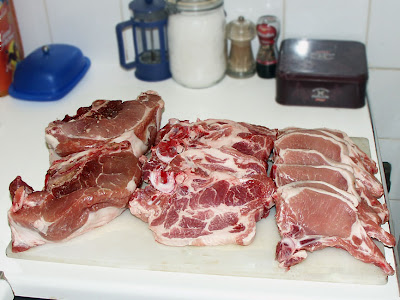 On the right are two loin roasts, sans skin, so no crackling potential, as is normal in France. I pot-roasted one in cider, which was not terribly successful (not enough collagen in this nice cut of meat to make slow cooking worthwhile). The other big piece I cured in brine and made into ham. This was outstandingly successful, and I am so chuffed with it, I will give it a separate post.

The loin chops on the right we fried, and served very simply with steamed vegetables – quick and easy for after a work day.

The big chops in the middle, from nearer the front of the beast, I jerked. Jerk pork is cooked for quite a long time, in two stages, so is ideal for these less prime cuts and I freeze it after the first stage of cooking, so it is a quick meal to prepare at a later date.

Jerk pork (or chicken) is clearly a recipe from a time that didn't have the benefit of refrigerators. Not only do you begin by rinsing the meat in water acidulated by lime juice, but you then smear it with a strongly flavoured paste, full of ingredients that can give some protection against food poisoning or at least mask the smell of deteriorating meat. In modern times, washing the meat first has the advantage of removing all the little splinters of bone that you get with this cheap meat that has been cut with a bandsaw rather than professionally butchered. I have to admit that the recipe isn't in the least French though. 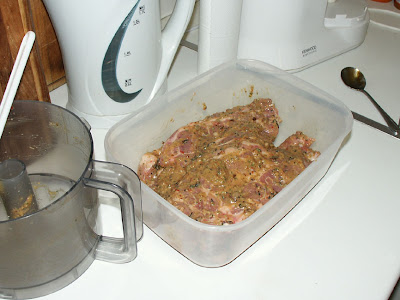 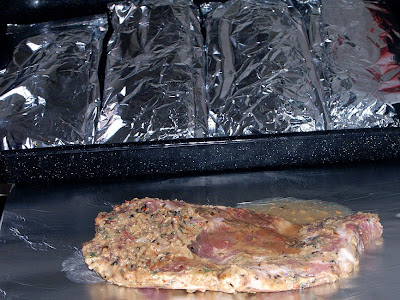 To finish the dish, open up the parcels and cook for a further 30 minutes in the oven. This stage can be done from frozen. Serve with rice'n'peas (which I always get Simon to make).
Susan
Posted by Susan at 10:00

The jerk paste sounds interesting, Susan. Would that be equal quantities of each ingredient?

Jean: I'll sort you out with some idea of quantities after I get home. It's not equal quantities of everything, but much of it is down to personal taste. Jerk pastes can range from slightly peppery to ragingly hot.

Susan, thanks for that. Slightly peppery sounds good to me ! Hope you're having a great time.