A series of photos of chimneys in Preuilly-sur-Claise. Along with other things, chimneys are never far from my thoughts. 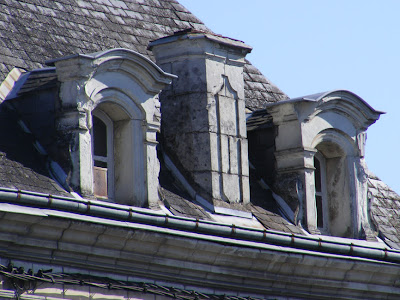 I like the first chimney - very elegant, if slightly impractical. Being lower than the top of the roof (and on the downwind side of the roof for prevailing winds), the smoke would tend to blow down it, kippering everyone inside. 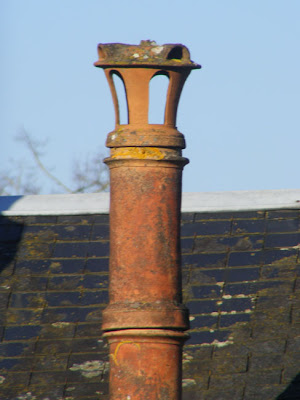 The second chimney is also sort of elegant, and we could end up with a chimneypot like it. Our chimney will come out of the roof right by the eaves and will need to extend quite a height. This would be one way of doing it without adding too much extra weight. 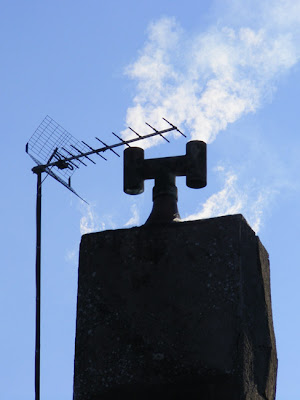 The last specimen is a bit of a worry. Almost as much smoke emits from between the brickwork as it does the chimney. We don't want one like this.

We still have not had our new chimney built. We are now considering having the fireplace rebuilt as well, so we can use an insert fire rather than a stand alone one. This will be safer, and probably more efficient. We posted a photo of our old chimney here. It's the top one (in case you need telling!)

All these photos were taken on the 3rd weekend in February. The sky really was that blue - no digital trickey involved!

Email ThisBlogThis!Share to TwitterShare to FacebookShare to Pinterest
Labels: Packet of Three, Pictures of Preuilly

Chim-chimery, Chim-chimery, chim chim charoo.
Why don´t you design your own? Would be nice to have a chimney no where to find.
I´ll give you a hint....design them as a pair of vikinghorns ;-).

To go with the chimney in the third photo which looks like a "Hammer of Thor" chimney, you mean.

It's a neighbours chimney, so I guess it would be continuing the theme...