I am sure we are all in some way disappointed by the 21st century: I fully expected that by the time I was 40 we would all be wearing one piece tinfoil suits, travelling by jetpack and holidaying on the moon.

There is one aspect of life that has changed amazingly, and that is the amount of information you get when you travel. Gone are the days of phoning an airline to confirm your seats and then just arriving at the airport some time before the flight left - now we check in online, and check the internet on the day we travel to make sure our airline is still solvent and leaving on time. On my first trip overseas (1977) I spent 3 months in Europe totally insulated and isolated from anything that was going on in Australia because British newspapers just didn't mention the place - now we can check the news anywhere and at any time. I went to post offices and booked really expensive phone calls to my parents - now we have mobile phones, email and text.

But those of us left at home needn't feel left out of the travel excitement.

Susan left for Australia on Tuesday, flying to Sydney with Asiana Airlines via Incheon airport near Seoul. As her flight left Heathrow I was able to follow its path using Flightstats.com. This gave me all the info that the display inside the plane shows. Unfortunately, I wasn't thinking quick enough to get a shot of that, including the flight map when it was happening. This is a shot of the information for the second leg of her trip. 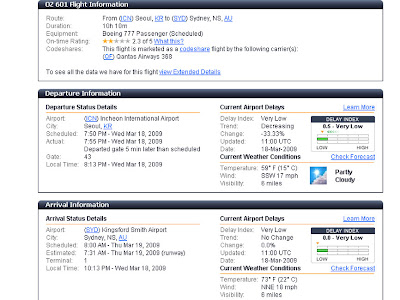 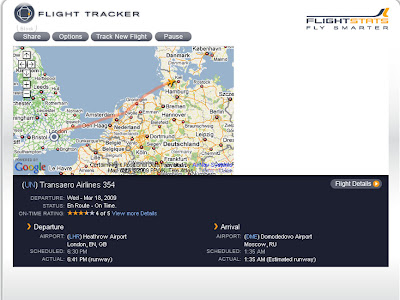 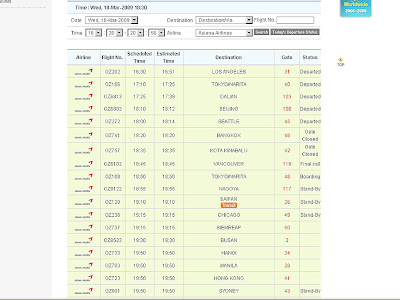 Once the plane had left Incheon, I was able to check Flight Aware to see how the flight was doing. 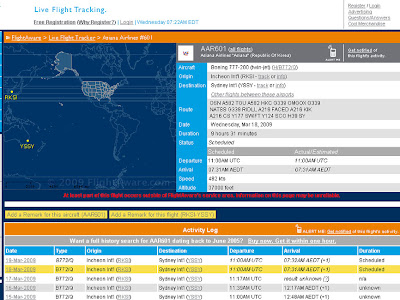 Yesterday evening I went to the Sydney Airport arrivals board to see when the flight arrived, and then about an hour after the plane arrived in Sydney I was able to see it on a recording of the Sydney radar system. For real, recorded life thrills, you can go to this link*, uncheck the "show current flights" box, set the time for 07.27 am on 19/03/2009 and the speed at 10x to follow her flight in. Hover your pointer over the planes to find Susan. 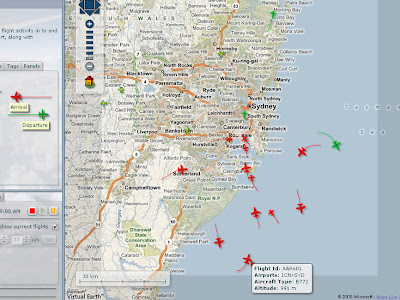 OK. I will admit I am jealous. I like Korea and if I had gone with Susan we would have spent a week there on a layover. I spent a month teaching English at summer school in Seoul in 2005 and had a whale of a time. One day I may even post some photos in here. That will confuse anyone looking for pikkies of chateaux!

"I spent a month teaching English at summer school in Seoul in 2005 and had a whale of a time."

Whale of a time? LOL, is it like "rigoler comme une baleine"?

Valérie: I didn't know that expression, but I think it is the same thing - I did have a lot of laughs. "Whale of a time" a very old English expression - I don't know why whales are assosicated with having a good time!!

Hi Simon,
I'm glad to know that your wife has arrived safely in Sydney.
I will admit to being "out of it" in regards to all those "tracking" links ! Fascinating & very good for people checking in on loved ones.
Incheon.. My old man used to talk all about that place and others too in Korea. He was a Korean war vet, so he saw that country in rubble & utter ruin.
I've never been there myself.Very nice experience teaching in Korea during a month !

Hello Simon,
I spent a month in Seoul in 1988, as a translator for the Olympic Games, since French is an official language and rightly so. I had a great time in Seoul.
It's a beautiful city that reminded me of some southern France cities like Nice. Large avenues bordered with, can you imagine, weeping willows!
Loved the local cuisine until I had to stop, too much kimshi. Can't wait to see your pictures.

chm,
I had to stop eating Kimchi after 2 weeks because my teeth had gone furry! Loved the BBQs, but I think my favorite meal was black pudding stew.

I was there for the 60th Independence Day (August 15) and it was one of the best parties I have been to.

Barbara.
If you get the opportunity to go to Korea, do so - it is an amazing country!

Hi Simon, once again I'm impressed by your ability to make your computer not only do what you want but something usefull. You obviously have far too much time on your hands!
I'm the bemused bloke at the airport that still checks in at the desk and phones up to confirm flights..or to be honest gets someone who knows how to do it at the the hotel to confim them for me. I did wonder why they looked a bit bemused when I asked...

Thanks for those links. I've been looking for European and world flight tracking sights for ages. The only ones I've found are American based and don't do much else, unless I'm tracking a flight from the US to Europe.

These sites have never shown up on my google searches for online flight tracking. Now I have them bookmarked!

...And I'm loving the live radar at Sydney! I wonder if other airports around the world (like CDG) do this?

Walt
If you know the three letter code for the airport you can substutute it for the "syd" in the address. LHR gets you heathrow, for instance, which is well impressive.

nick.
sshhhhhhh Susan thinks I am busy ALL the time!!

This is a great post.These sites will come in very handy when my husband starts travelling again. He travels from March to October with his job. He is off to Melbourne tomorrow for the 1st Grand Prix of the season..yes he works for Formula 1, so travels all over!