You may recognise the devilishly handsome (if somewhat grubby, shaggy and disheveled) creature in this photo. We have shown a photo of the mediatheque before, now for an interior shot. 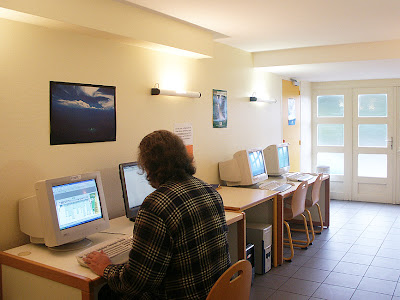 When I first arrived this week I thought they had got rid of the printer. Not so - I discovered (but only after taking advantage of Jill and John's hospitality) that the printer has been moved to the librarian's office. I like using the mediatheque, but hopefully soon I won't have to. We are getting our internet connection sorted in the next couple of weeks. Hopefully.

And now for some less positive news: When I arrived on Monday I noticed that our stone ball has gone missing. Whilst this is not the end of the world, it is the sort of petty thing that really annoys a bloke. Looking back at our photos it can be seen in the background at Christmas, but by February I can see (also in the background) that it was missing – just that neither Susan or I noticed. We have no idea how old or historic it was, but that isn't the issue – we liked our stone ball. 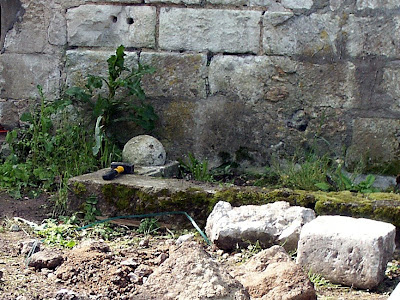 When I arrived in Preuilly this week I was pleased to see that our phone book had arrived - and we are in it! This makes me feel almost a part of the place. Our recycling bags and black bags for poubelle (which are distributed by the council) had also arrived. Alan sorts all this stuff our for us while we are not here, which is really good of him - and very useful.

Email ThisBlogThis!Share to TwitterShare to FacebookShare to Pinterest
Labels: Our house in Preuilly, Random Thoughts

Thank God for the Mediathèque; it has really been helpful for you both.
Just in case that you haven't opened your e mail inbox, there's a special link for you in my e mail.

Have a great day !

Sounds like you needed a stone chain to go with it.

We had large stone balls on our gate posts and often wondered if like stoddle stones anyone might try to 'lift' them. Perhaps we should not have worried, for when an Army Land-Rover on manoeuvres reversed into a post, the ball fell off and went through canvas roof and metal floor of the vehicle and immobilized it. Much mirth including from soldiers who preferred hot tea to their night-time exercise.
John

The Preuilly Mediatheque facilities look wonderful. I'm impressed and grateful that you make a daily pligrimage to blog - I for one need the inspiration.

If you want the stone ball back, keep an eye out for youths with a limp....kicking that around the park must hurt! Seriously though that is a real downer.

I assume the stone ball theifs were local toerags rather than an organised stone ball stealing syndicate. I have been looking in all the streams to check that it hasn't just been rolled down the hill.