The Church in le Petit Pressigny is a bit of a gem. 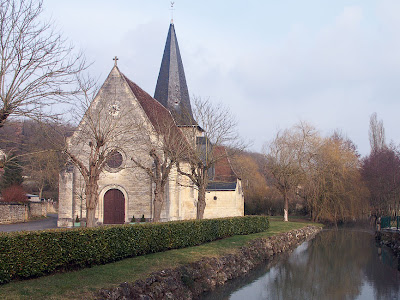 Not only is its location quite pretty, but the building itself is interesting. It was started in the 12th Century (which is quite common around here) and altered almost continually until it was listed as a protected monument in 1926. There was some roofing work undertaken in 2008, the result of which is this very sharp looking mini tower over a staircase. 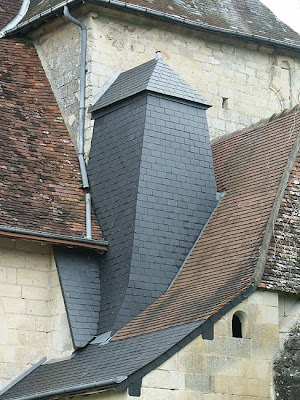 According to the official documents, the ceiling is a false barrel vault (fausse voûte en berceau) - this can be identified by the fact that although from outside it has a gable roof, inside the ceiling is a rounded vault 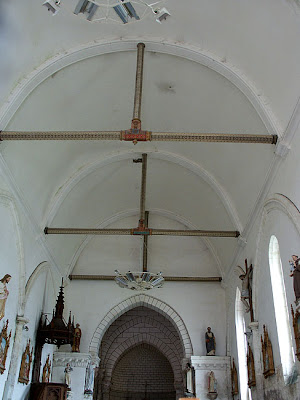 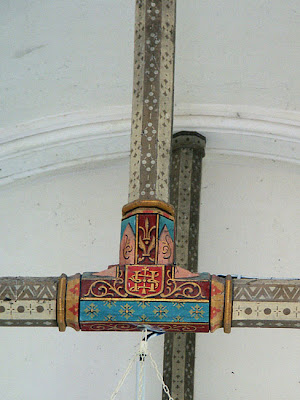 Hi Simon & Susan,
I love this little church ! I have the memory of one going to Le Petit Pressigny with my husband.
That was the time when we would go to the mairies and look in their archives ( for hubby's Genealogy).

Very interesting photos of the church.

Any idea whose crest that is on the decorated bracing ?

In the Latin-speaking Christianity of medieval Western Europe (and so among Catholics and many Protestants today), the most common Christogram is "IHS" or "IHC", derived from the first three letters of the Greek name of Jesus, iota-eta-sigma, or ΙΗΣ. Here, the Greek letter eta was transliterated as the letter H in the Latin-speaking West (Greek eta and Latin-alphabet H had the same visual appearance and shared a common historical origin), while the Greek letter sigma was either transliterated as the Latin letter C (due to the visually similar form of the lunate sigma), or as Latin S (since these letters of the two alphabets wrote the same sound). Because the Latin-alphabet letters I and J were not systematically distinguished until the 17th century, "JHS" and "JHC" are equivalent to "IHS" and "IHC".