After my pathetic little appeal last time I wrote about the bathroom floor John rang and asked if I wanted him to bring his big spanner over. I jumped at the opportunity to get the bolts through the wall properly fastened (and the opportunity to survey their building works), so went to Bricomarche at Yzeures to buy my own spanner, picked John up on my way back home, and 10 minutes later the job was done.

Next step was to put in the facing bearer. This was slightly problematic as the beam which I had planned to bolt it to wasn't level. (This means the landing isn't level either, but it's been that way for a couple of hundred years, so it isn't a problem.) Using a combination of angle and flat plates and some wedges it was the work of minutes* to get the bearer level and solid.

This meant that when I put the spirit level across the gap between the bearers I discovered that the bearer on the wall was about an inch lower than the bearer on the landing. This meant removing the saddles already bolted to the ouside bearer and raising them. Working on one joist at a time I reset the saddles, and set the joists, continually checking on all angles the the frame was level.

A couple of hours later and I was done: the joists are hight than the bearer, but I can remedy this by screwing another piece of wood on top of the bearer. 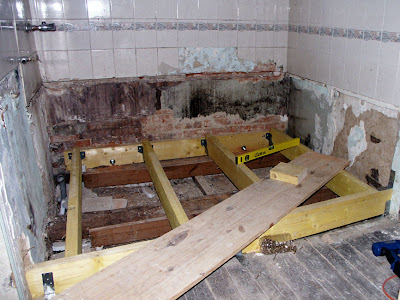 It feels like I have used 3 or 4 kilos of screws on the frame, but it is solid - and I don't want to look like I am gloating, but: 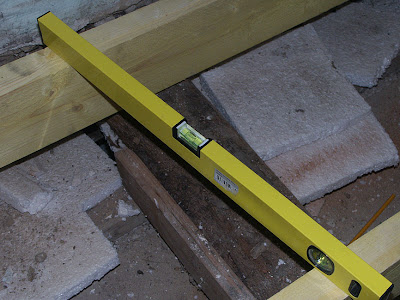 The next day, after lunch, I went to the decheterie, and on the way back called into bricomarche an collected three sheets of floor panels for wet areas. Cutting them to shape was difficult - there is no right angle or parallel walls in the room. I screwed the cut boards down, and suddenly we have a solid, unflexing floor. 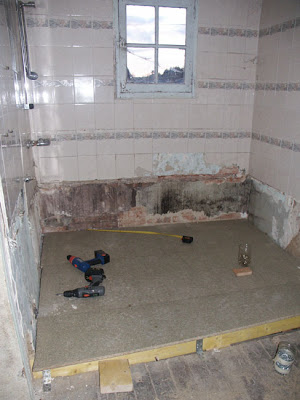 Compared to the Taj Mahal it may not look much, but I am inordinately pleased. This is the most proper carpentry I have done, and the first piece of structural work I have ever done.

*Or should have been minutes. I work very slowly: because I have no idea what I am doing I check everything at least 10 times.

So... do you know where to cut the holes for your water supply and drains for the fixtures? Without hitting a joist?

If I remember, you're relocation shower & sink. Can you still make use of the existing plumbing locations?

...and after all that wcs has said. Glue and screw. Or are u gonna wait for the plumber?

I am waiting until the plumber has been until the floor gets officially attached. Until then I have just put a couple of screws in each board to hold them in place so I can stand on the floor to remove the tiles from the walls.

I have almost 30cm of space under the floor, which should be Ok for the drainage n stuff

Great job Simon! Can't wait to see the finished bathroom. So can't you, I presume?

Stunning job Simon, very well done. The rest will be easy by comparison, or at least that's what it says in my DIY For Idiots book.

very impressive. i can't cut a piece of shelving paper to fit.