One market day recently my neighbour Sylvie stopped me in the street and urged me to put 25 August in my calendar. Her daughter Ninon would be playing with her band Le Caribou volant at the new guinguette in Preuilly at five o'clock on that date.

I sent a message to everyone in the Claise ConneXion to say we'd be there and they were welcome to join us. I explained to the anglophones that a guinguette is a temporary space for music, dancing, drinking and eating with friends, set up on the banks of a lake or river. They are very much associated with the 19th century in France (there are several famous Renoir paintings set in a guinguette) and are undergoing a popular revival at present. Our commune (local authority) has built a large solidly permanent new shelter at the recreation grounds and has dubbed it La Guinguette. 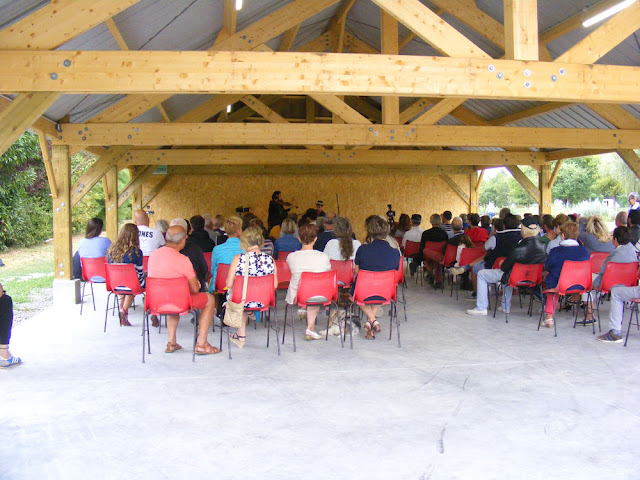 Throughout the summer little concerts have been staged there, and the local councillors run a bar in an adjoining shelter. The concerts are free and the bar is to raise a bit of money for future events.

We loved Le Caribou volant, as did all our friends, although they were not at all what I was expecting. I thought they would play traditional, well known French chanson and folk music, including plenty of singalong and dance numbers for the audience to get involved. As it turned out, there wasn't a single cover version and no dancing, but they were clearly in fact part of the chanson tradition of songs in which the words are more important than the music, which must consist of catchy tunes so you can sing along easily.

Simon described their style as being as if Bob Dylan had met up with Bob Marley to play gypsy music (manouche) together. I suspect the Caribous would take that as a compliment. Their musicianship was good and French and Anglos alike enjoyed their performance.

I was still engaged with meeting and greeting when they played their first song. Their second song made me sit up and take notice though. It was about climate change! We also got a song about Britain and Burger King (with a Brexit joke), one about high street (main street/rue principale) shopping and one where the small town rural audience got to sing along about how Monsanto was bad for your health!!

I had made a pound cake which I distributed to friends (and a few strangers who blatently asked for a slice) during the interval. Pound cake is called quartre-quart in French and mine got rave reviews from my French friends. I had made it deliberately because it is the sort of simple dense cake that French people love. As ever when French people like food there was much discussion about the ingredients and method.
Posted by Susan at 09:00