Our furry mammal fix in Switzerland was provided by the Alpine Marmot Marmota marmota. There we were, minding our own business and picnicking on some rocks up a picturesque valley when something on the hillside started shouting. At first I thought it was a ground nesting bird making an alarm call, but after some scanning of the surrounds with the binoculars (which I'd been lugging around in my backpack for just such an event) I spotted these two critters on a pile of rocks. We were I suppose about 150 metres from them, and the path being used by a steady stream of walkers and mountain bikers was maybe 100 metres from them. Despite that, we were obviously too close for the guard marmot's liking and it made a repeated and piercing call. In the end my photos show three marmots in all, but at the time we only noticed these two.


Two of our three marmots. 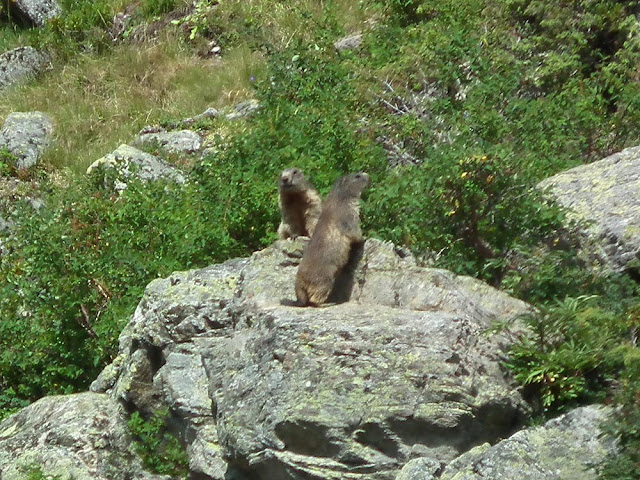 We all remarked on how unexpectedly large they are -- nearly the size, and a not dissimilar shape, of a corgi. As our friend Antoinette subsequently pointed out, we only got to see them because we were there in the summer. They are very familiar to anyone who hikes through these alpine areas in the summer as they draw attention to themselves with their vocalising. But anyone who only visits during the winter for the skiing will never see one -- they are all underground and hibernating. Once we knew what they sounded like we heard them in a number of places and I spotted one on a rock as we drove  by further up the valley, but we never saw any others.


We were at about 2000 metres when we saw them and they live in the mountaneous areas between 800 metres and 3200 metres. They are in fact the largest member of the squirrel family, and have thick grizzled fur, a mixture of blond and dark grey with a bit of red in places. Our marmots appeared to be typical, living in a rocky outcrop in the middle of alpine meadow. They are very sensitive to heat, sometimes not emerging at all if it is a hot day. Their diet is omnivorous, a mixture of tender young plants, worms and insects and they can live for 15 years.


Where the marmots were living, photographed from where we were picnicking. 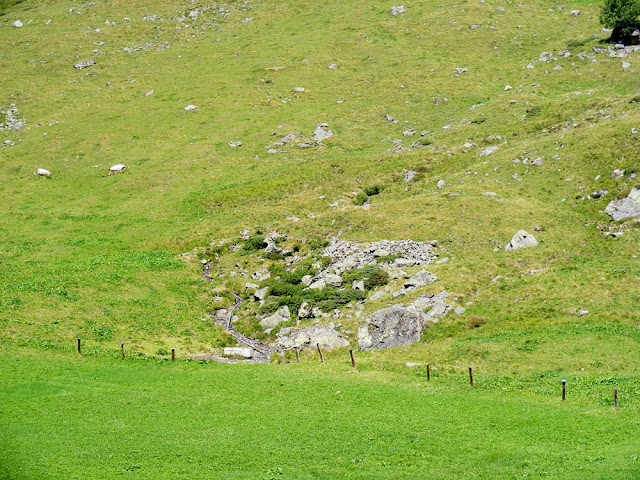 I was getting worried, Susan, not seeing today’s post at the usual time or somewhat later in the morning. Since the other blogs were working fine, I knew it wasn’t one of Mr. Blogger’s entourloupettes. All’s well that ends well!

Since I have never seen a marmot in the flesh, I had no idea they were of the squirrel family, like the prairie dogs and the ground squirrels in the U.S.

I set the wrong publishing time on the post. We were out all morning and only alerted to it not publishing when a swimming companion remarked that it hadn't appeared by the time he left for the pool.

Oh, to be able to look on a marmot with benign interest the way you do, Susan. We have a type of marmot here, on the US east coast, called a groundhog. It weighs up to 13#, is voracious, able to climb, and quite the digger. Behavior sounds similar to your mountain marmot but ours are solitary, not social. They have an awkward gait but they can hustle. They are the ruination of gardens. If your area is in need of groundhogs, we can bring you some of our surplus (they are all surplus in my opinion).

But, Carolyn, how would we know when any winter would be over if we didn't have groundhogs?

I've never heard of the alpine variety being a pest in gardens. Here in the Touraine we've got badgers to fill the digging and munching where they are not wanted role.