Normally those words would be followed by a picture of a meat pie.

Not this time, however. This is the other Aussie icon, an FJ Holden Special sedan from 1955.


This restored FJ is in the Museum of Australia, Canberra 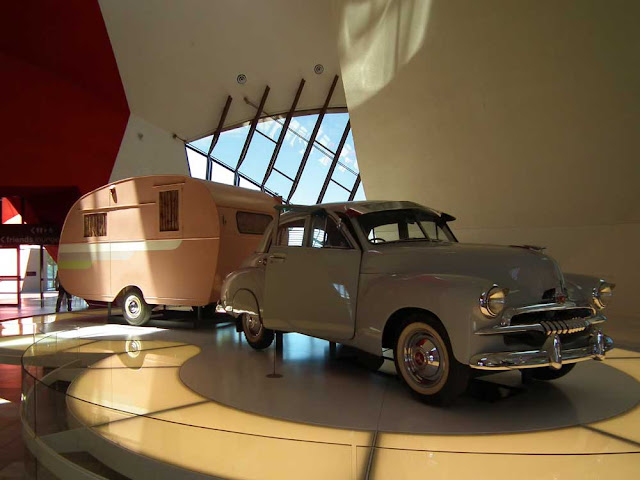 Commonly referred to at the time as "Australia's own car" the FJ Holden is an update of the 48-215 Holden of 1948, an unused post-WW2 Chevrolet design. When we were kids Australia had three main car makers, Holden (yay!), Ford (boo!!) and Valiant (not bothered...). These days there are no major car-makers in Australia.

Brand loyalty is a deeply ingrained thing - I owned Holden station wagons for many years, and never owned a Ford until a couple of years ago.

In North Carolina, we always had Chevies and other GM cars (Pontiac, Oldsmobile). My father's first car, in the 1940s, was a Ford, and he hated it. So what did he do? When I graduated from college and was going to live far far away from N.C., he bought me a used Ford! I hated it. I sold it and bought an Opel in 1973. That wasn't a very good car either. I recognize the car in your post as a Chevrolet, that's for sure. For a while in the 1950s, my mother had a 1952 Plymouth with that kind of sun visor on it.