Stéphane doing something cheffy with a tomato. 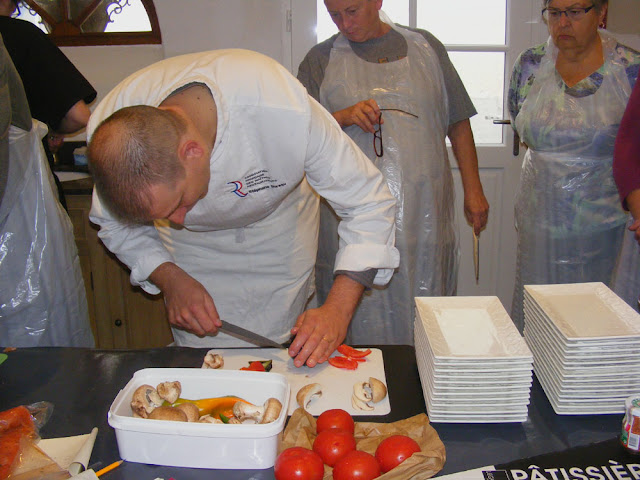 As part of my week spent guiding a group of American gardeners around the Loire Valley I got the opportunity to attend a cooking class with the chef at the Hotel Clos d'Amboise, Stéphane Bureau. Deb Flanders, from Goodspeed and Bach, who organised the tour, has traditionally included a cooking class in the tours with Charlie Nardozzi, and this was no exception.


The only photo I have with Cédric in it! He's the dark haired guy reaching across the table. 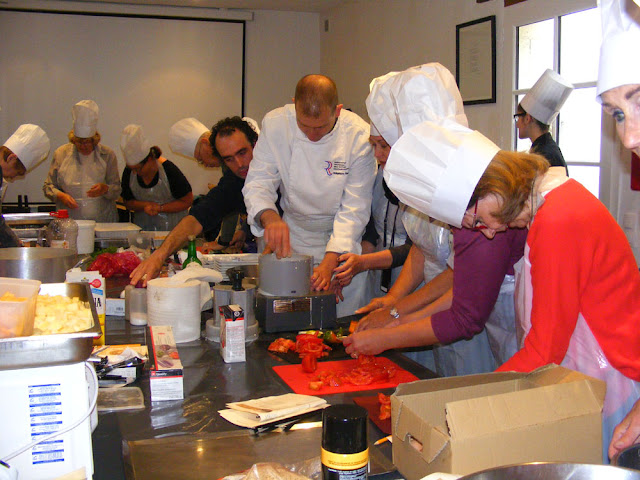 Finding somewhere that would take a group of more than 10 people for a cooking class was really difficult. Deb and I exchanged ideas and emails for months before Stéphane said he would do it. Luckily for us, he has been wanting to start doing classes for the public since the beginning of the year and now had got permission from the management.

A proud julienner shows of her handiwork. 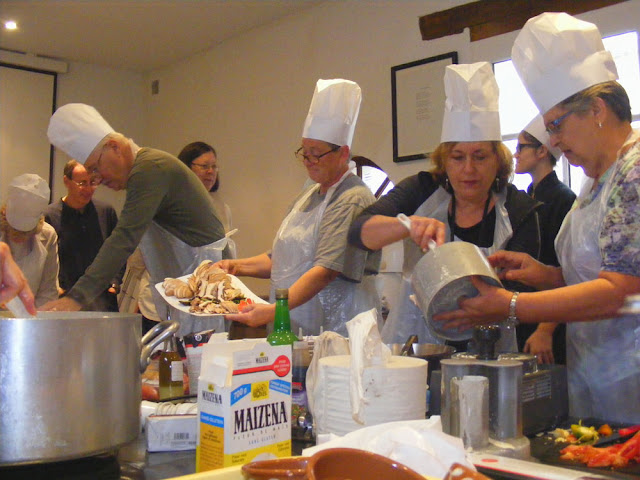 He very sensibly designed a menu that would give everyone something to do, from those who were experienced and wanted a challenge, to those who needed the basics. He also very sensibly invited his sous-chef Cédric to join us. Stéphane's English is hesitant and his vocabulary limited. Cédric has worked in Ireland, Australia and New Zealand, so his English is excellent, and he and I provided translation services.

Chef and student concentrating on giving and receiving instructions for the pudding. 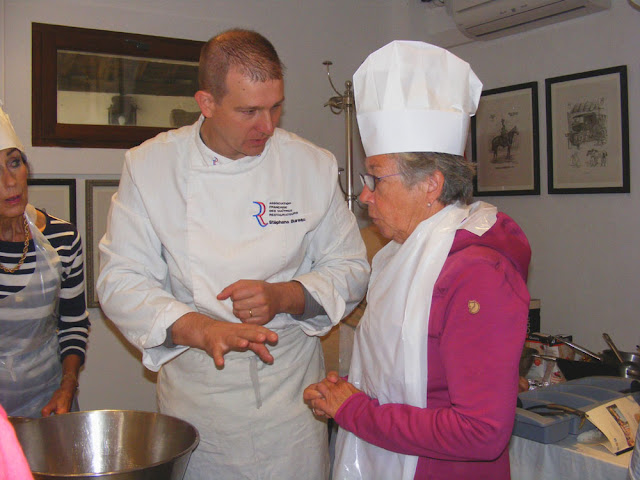 Over the course of two hours we made Salmon Mousse, Hazelnut Crusted Chicken with Sainte Maure and Vegetable Gratin, followed by Squidgy Chocolate Pudding. Then we got to eat it for lunch. At the half way point we took a break for oysters and white wine from Chateau de la Presle, who are neighbours of Stéphane.

Oysters from the market, prepared by the apprentice chef. 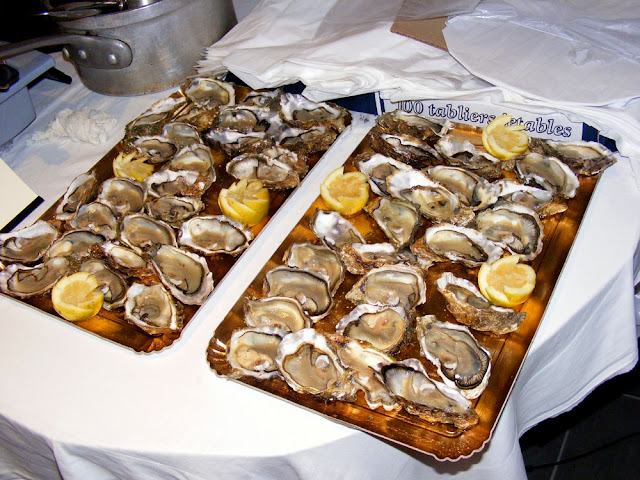 The teaching kitchen was jam packed with equipment temporarily set up and 25 people. In that very French way it seemed like utter chaos to begin with, as Stéphane gradually made his way around the room, explaining to everyone their particular tasks. The group was broken up into four smaller teams, each of whom got to work on a dish. I sort of hovered mostly between veggies and pudding. After a short while everybody was concentrating and it all came together. We produced a tasty meal with very little fuss and bother.

Getting ready to plate up the starter. 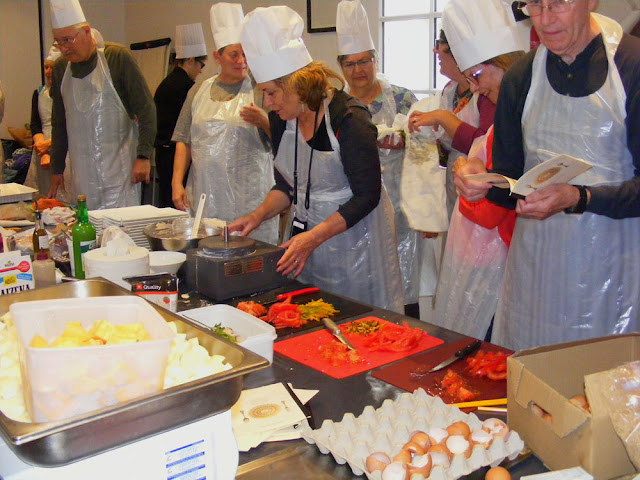 Despite us being his first class, Stéphane was a model of calm and relaxed instruction -- or so we thought. The receptionist later let slip that he was in fact very nervous. It didn't help that we were such a large group. He had another, smaller, group scheduled for a few days later, and was relieved when our group went so well. The next group will benefit from some tweaks to solve minor issues that were revealed by our class. 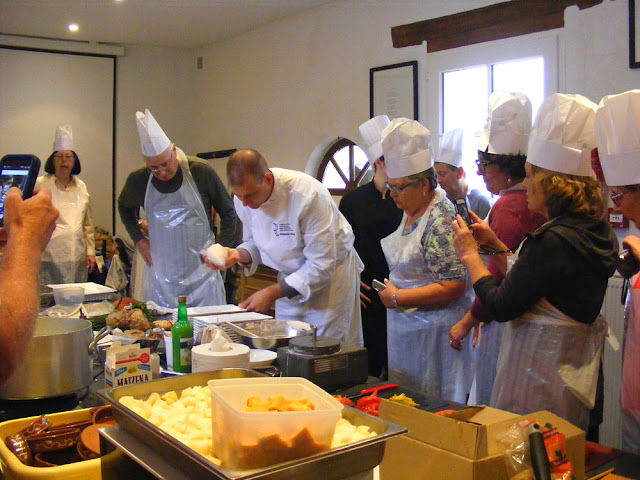 All in all a fun and convivial way to spend a morning in Amboise. 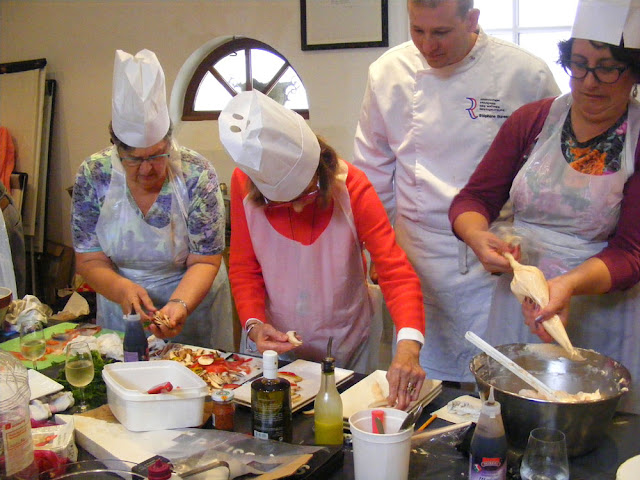 Nothing left to do except wait for the caramel to boil. 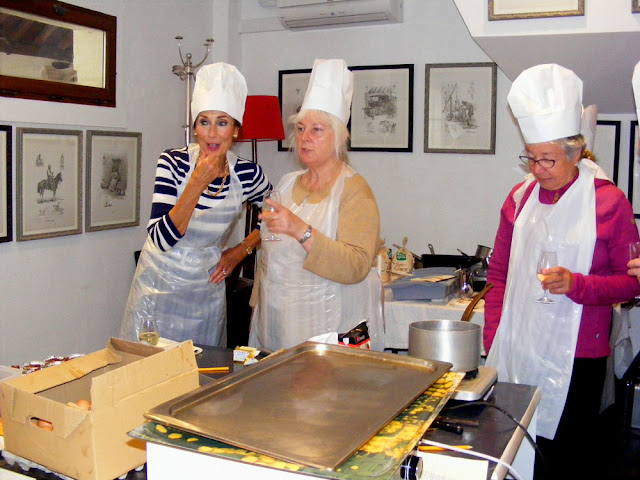 Sounds like fun. I keep thinking about all the washing up. A kitchen crew to take of that no doubt.

We didn't meet the plongeur, but no doubt there was one :-)

WOW! This looks so interesting. I'd love to do this...

Do you want me to look into how much he would charge and what the minimum group number is?

That would be good! Thank you. I'm sure we would find quite a few interested people.