At the Employment Office

On Tuesday I spent the afternoon at a session for people who are job seeking. The Maison d'Emploi in Beaulieu lès Loches where the workshop was held was still showing the scars of a drunken rampage that occured in mid-July. A young man had used an outdoor ashtray and a large rock to smash his way into the centre during the night and cause tens of thousands of euros of damage, breaking doors, windows, computers, photocopiers and a fridge. The event truly shocked the staff, who had never experienced anything like it. The newspaper report (with a photo of the mess) is here.

A temporary grill and some plastic cover the broken windows at the front. 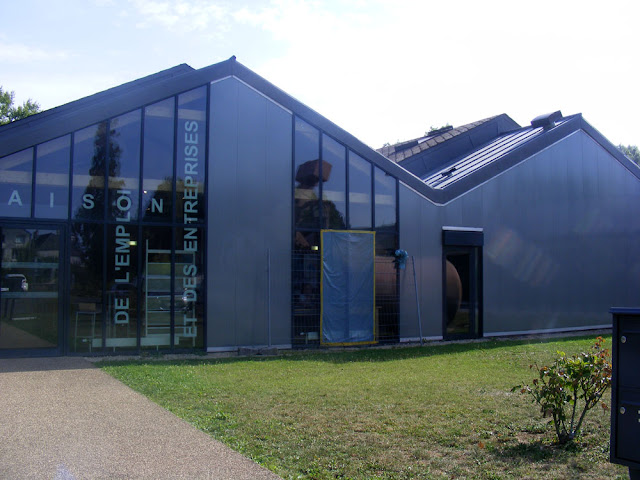 Anyway, six of us plus an employment councillor from the agency Aksis, which is contracted by Pôle Emploi in a private-public partnership, adjourned to the big meeting room with the smashed window in the middle of the building. Our councillor Peggy introduced herself (she is hearing impaired so we needed to speak directly to her, for example), then the group introduced themselves. There was a signwriter, the only man; a secretary who had left her last job due to health problems; someone who had recently retrained as a leatherworker (Fr. maroquiniste); a bookkeeper with no formal qualifications who was told in a recent interview that they were looking for someone younger; and a receptionist who had been working at a police station which had been merged with another. I was the only one there who was simply seeking to supplement my existing work. The rest were all unemployed and seeking full time work. I was also the only one who wasn't French, but despite a couple of minor language hiccoughs where I had to ask for something to be explained, I got on just as well as everyone else, contributing to the discussion and mostly keeping up.

Peggy gave us an overview of the employment scene in Indre et Loire, and it wasn't promising. The two biggest sectors are agriculture and tourism. The next biggest is pharmaceuticals, and there is quite a push by the authorities to create the 'Cosmetics Valley' along the Loire. The general opinion is that it will outstrip tourism in the not too distant future. But until it does, the bad news for my companions on the day was that 4 out of 5 jobs in the area are seasonal. Not a problem for me particularly, but a blow for those who want stable full time work. Peggy also pointed out that if you are an employer these days and recruting, you can count yourself lucky if 10% of applicants meet your criteria.

The smashed window of the room in which we met. 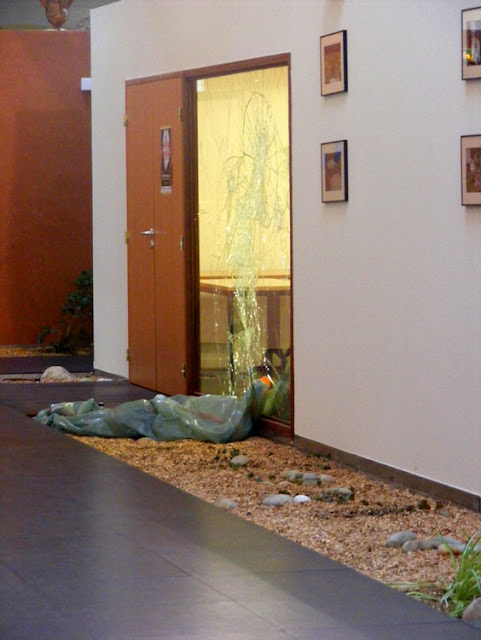 She wasn't all doom and gloom though. In fact she was quite feisty and motivating (I guess that's her job, really). She encouraged us to send our CVs off speculatively and use our personal networks (often a job offer comes from someone who knows someone who knows you). Thanks to her I now know about a bunch of websites which tell me what industries are looking for workers (the Besoins de Mains d'Oeuvre report), how to tell what activities a business is engaged in by its APE code, how to find the contact details of managers (on the Observatoire de l'Economie et des Territoires de Touraine website), and how to identify key words relating to skills (using the Fiche ROME on the Informations Marché du Travail section of the Pôle Emploi website).

Most importantly of all, for me at any rate, she offered to cast a professional eye over my CV (it's not colourful enough and the nuances of my compétences need work apparently). She will also help me with writing lettres de motivation. I have access to her and the programme until 19 October, so I'd better get cracking.

I wish you the best of luck. Now that you have a very good command of the French language, it should be easy.

Susan, anybody who hires you can count themselves lucky.

The first thing that occurs to me is the Offices de Tourisme. We’ve visited dozens in France and rarely can the staff answer a question about anything other than the local highlights. If it isn’t in a pamphlet they don’t know about it. Your combination of knowledge, flexible thinking, and warmth would make you a natural at a tourist office. Of course you're already pretty busy in the tourist season and you'd probably prefer your supplemental work to fall at other times. Anyway, good luck!

We saw that building in May; it gave us a slight shock to see such a new building in the old town.

I wondered if they’d finished work on the clocher and, looking it up just now, I see that you can get a tour of the works at the clocher on Saturday mornings.

Thanks for the good wishes, but I very much doubt it will be easy.

I will send off a CV to a couple of Tourist Offices, but not hold out much hope. I think a lot of people quite fancy working there, but on the other hand they don't have a particularly good reputation as being reliable employers (hiring and firing on a really short-term basis, but that may be to my advantage).

The Maison d'emploi is hidden away, reasonably well set in its landscape and isn't ugly. I don't see a problem with it.

I hadn't realised one could visit the belltower works, so thanks for that. Yes, it's still covered in scaffolding.