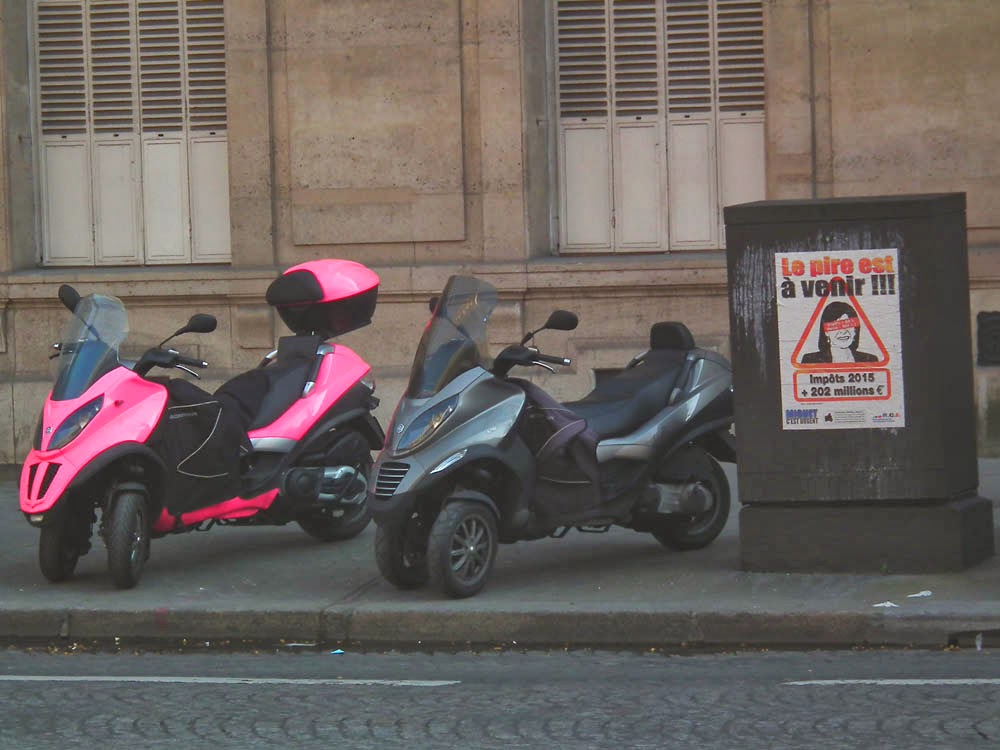 Simon took this photo because he liked the dayglow pink scooter on the left. I was more interested that he has captured the political poster. It says 'The worst is yet to come!!!' and features Paris Socialist mayoral candidate Anne Hidalgo (who became the first female mayor of Paris a few days after this was taken) and the claim that under her local taxes will increase by 202 million euros in 2015.

These posters were plastered all over Paris in a high profile campaign involving an investigative journalist called Nicolas Miguet. He claims not to have been working for the opposition candidate Nathalie Kosciusko-Morizet, but to be a concerned taxpaying citizen. Then there was an accusation that Anne Hidalgo, who was previously deputy mayor of Paris, used City of Paris employees to take down the posters, and there was a good deal of acrimonious exchange. The tax in question is the tax d'habitation (council rates on property), which is calculated based on the theoretical rentable value of the property.

On the surface, the proposed changes are to take into account the resources of the taxpayer, but many fear it will be an excuse to raise taxes. It hasn't been reviewed since its introduction in the 1970s, when the base property rental values were originally set. Obviously, there will be some winners and some losers when the new valuations take place.
Posted by Susan at 09:00

Haven't you received form H1N1 yet?

Fly: You will have to explain. I can't figure out any connection between Miguet and bird flu.