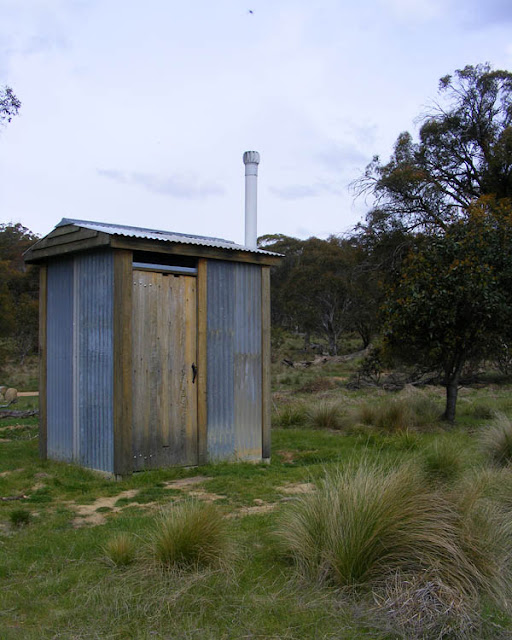 An Australian icon this. But this traditional looking dunny houses a smart modern composting toilet, not a metal pan that has to be emptied and buried once a week.

(And just so you know -- Redback Spider distribution map)

Up until my mid-teens I had never lived in a house with an outdoor dunny. We lived on farms, and had septic tanks, but when we moved into town, we got downgraded to a shed down the back of the garden because the small town we moved to didn't have a sewerage system until a few years later, in the late 70s.

The dunny in the photo above is at Brayshaw's Hut in Namadgi NP, ACT.

PS Chiotte (or more usually, chiottes) is French for dunny. (It amuses me that even when you are using slang it is not considered proper to refer to toilets in the singular in French.)
Posted by Susan at 09:00

Great... What is it made of!!! Corrugated tin sheets, what else. Bet they get quite warm in summer, not a place to sit for a long period!!! I have many toilet memories as a child....Going across a cold freezing yard to go in the middle of the night for one... C

Les chiottes is very familiar as langauge goes, and some French people might be shocked at such language. It's much better to say les toilettes or les w-c (les vécés). Another term to avoid is les gogues. On peut aller au petit coin, aux cabinets, au fond du jardin, or dans un endroit secret...

Nobody knows why it is plural. But then why is the formal pronoun of address, vous, in the plural. A king or queen has ses appartements in a château, also in the plural. The plural somehow makes it abstract and not so graphic.

Do you use the word "outhouse" for outdoor toilet in Aussie English? "Outhouse" is the standard American word for your "dunny" — speakers of British English need to know that. I see houses for sale with several "outhouses" — we'd call those "outbuildings." What's the origin of the term "dunny", BTW?

I saw a bio wine labelled as

Ken: dunny is familiar too, but les chiottes is slightly more vulgar I think. I wouldn't use les chiottes except when joking with friends. I didn't mean to imply les chiottes is the word for toilet, but that it is more or less the equivalent of dunny.

Apparently dunny comes from dunnekin, which is an archaic English word for an earth closet. We had to look that up...

Outhouse would be understood, but could be ambiguous as it might not just apply to the dunny, but any auxiliary building.

Thanks for the stuff about plurals.

That was my point about the term outhouse. If you say it to mean outbuilding, then 350 million Americans have misunderstood.