At the end of our trip to Australia in November-December 2012 we spent a weekend in Sydney to catch up with old friends. Ever mindful of the cost of accommodation and eating out, we sought advice on good places to stay from various sources. 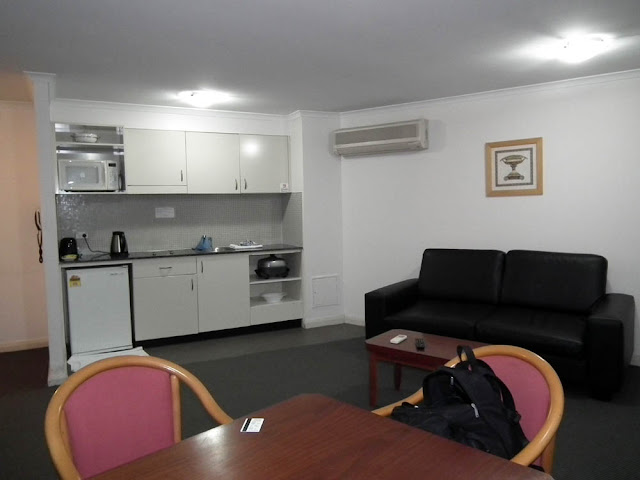 In the end we chose the serviced apartments Napoleon on Kent, recommended by my sister, who has stayed there with her husband a couple of times. We got a single bedroom apartment for the price of a bedsit. The price was reasonable and they advertised they had wifi. When we got there we discovered that the wifi was very expensive, so we did without, and this is one of the few criticisms I would have. Europeans are used to free unlimited wifi from accommodation providers, and having to pay by the hour comes as a nasty shock. 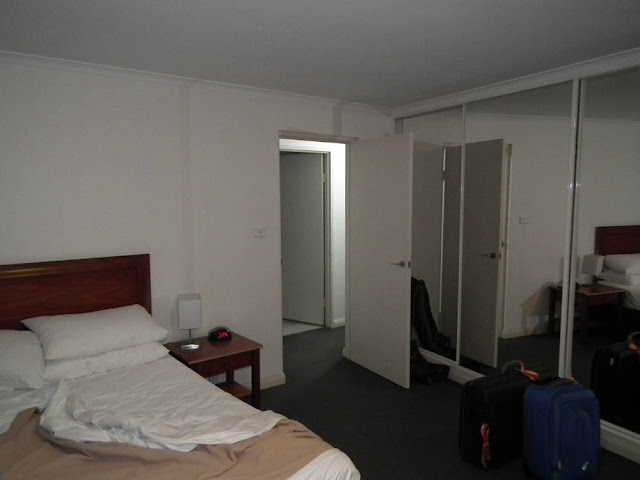 One of the big advantages for us was that its location could hardly be beaten. It is within easy walking distance (although down quite a steep hill) of Wynyard Station, and we arrived by train. It is also exactly half way between the workplaces of the two friends we particularly wanted to see, so we invited them for un apéro after work the evening we arrived. They were very impressed with our 'French flair' as we were all organised with dips and Lebanese bread. (Then we had to admit that it was our left over picnic lunch from the train...) There was a minor panic when we realised the apartment wasn't equipped with a corkscrew, then we realised that Australian wine is all screwcaps -- phew!

The apartment we got, number 301, was a very odd shape, situated as it was in the triangular end of the building. This was actually an advantage, because it meant we didn't have any neighbours. There was some street noise, but considering the building is directly under the freeway, it is remarkably quiet. 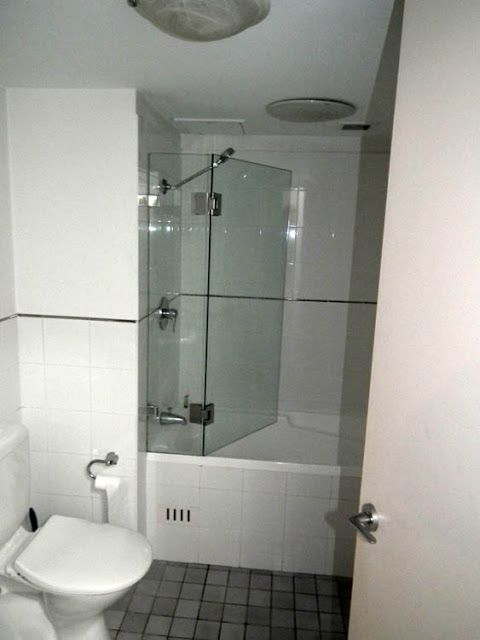 We were favourably impressed by the reception staff, who seemed switched on, friendly and practical. The furnishings and kitchen gear were plain, but comfortable and robust. The only real design negative was that Simon could not stand up in the shower, as the ceiling was very low. One unusual feature, which we could see would come in very handy for a longer stay, was the extensive storage area at the entrance, made up of open shelves. Great for boots and backpacks and all those extra purchases you might make in central Sydney.

Being able to cook for yourself and not have to have every meal in a restaurant is great when you are travelling. Not only is it cheaper, but it means you can eat what you want when you want. And for people like my brother-in-law, who is coeliac, it is much the easiest way of coping with meal times.
Posted by Susan at 09:00

It is a must when you are coeliac...