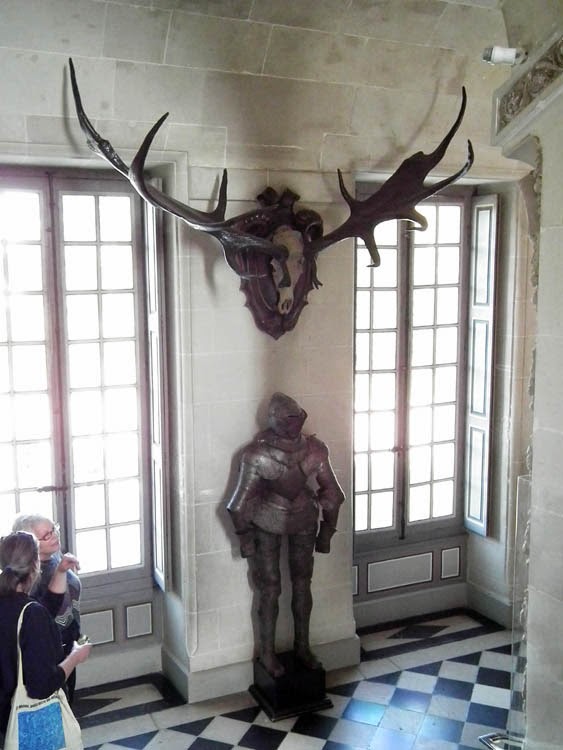 These Irish Elk antlers hang above the landing on the central staircase in the Chateau of Cheverny. They are the remains of an animal that lived at least 7 000 years ago, in Siberia, and were given to Paul, Marquis de Vibraye in the 19th century. He was one of that generation of collectors with time and money enough on their hands to dabble in all sorts of curiosities. The antlers are positioned at the height they are because that is where the beast's head would have been if where me and my client are standing was the ground.

Irish Elk and other megafauna were climate change losers back in the Late Pleistocene. With the retreat of the ice and the warming of the global climate, the elk was too bulky to survive when its habitat changed. Their main predators were ferocious packs of wolves, so they couldn't afford to evolve into smaller animals. Over time their scrubby woodland habitat disappeared and they couldn't find enough to eat to sustain their huge bodies. It is commonly believed that the big males with their investment in those vast antlers were the reason for the decline and eventual extinction, but the latest theory is that it was the problems does had in nourishing big calves that actually caused the extinction. Malnutrition probably caused very high rates of mortality amongst the calves, until the population declined beyond recovery.

Irish Elk is so named because most of the specimens have come from Irish bogs, but it was present all over Eurasia and actually more like an enormous Fallow Deer, not strictly speaking an elk at all. At over 2m at the shoulder, with 4m wide antlers weighing up to 45kg, they must have been a formidable animal. 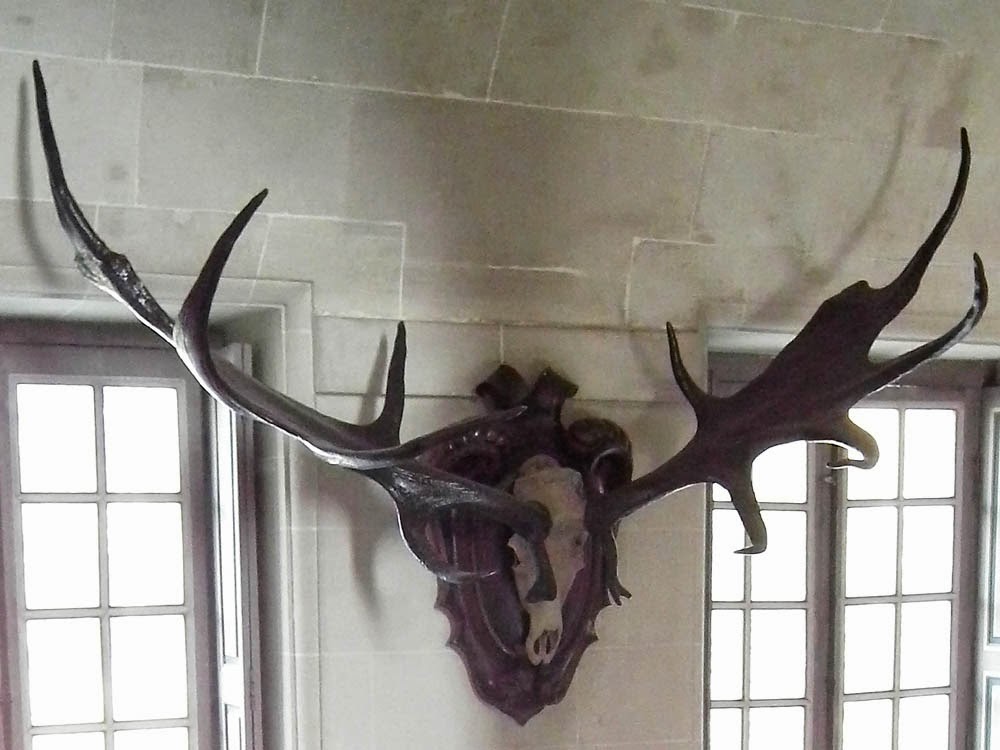 What a sight one of those must have been. Or two, head to head, fighting very carefully. Can I make out a missing point? Given the proclivities of 19thC collectors, it wouldn't surprise me if his taxidermist cut it off so that the ensemble fitted on the wall properly. P.

PG: I'm not sure about the missing point. The two antlers are not mirror images of one another certainly.

I think Pauline was refering to the "line of cut"...
and it is a shame that a cerf's skull was used to mount those two magnificent coathangers from...
looks wierd!!

Have you ever been to the Forestry Commision museum at Grizedale in the Lake District?

They'd been wall mounting the antlers of the weakest stag culled...
from the one point of a sprog-horned individual when they started...
to a magnificent Royal of twelve points when I first visited in 1970...
as a trainee forester...
to a very much wider spread set from a fourteen point Royal in 1984...
when I last visited.

They'd decided that 300 head was the largest number that Grizedale would support...
and they seemed to be right, the animals grew much larger than their overcrowded, poxy, open moorland Scottish cousins.
In 1982 a Belgian paid the not inconsiderable sum of £20,000 to shoot one!!

From necessary cull to self-suporting by-line!!
Or should that be BUY-line?

Tim: what would your solution be to mounting the antlers? a plaster model of an Irish Elk skull?

Once you lose your top predators, culling is a necessary evil so why not offer it to 'sportsmen' and keep it controlled, if the community won't support reintroduction of wolves.

I've never been to Grizedale.

There are several very interesting deer related studies doing the rounds at the moment. Received wisdom is taking a bit of a beating.