A group of scientists have been studying the population of Roe Deer Capreolus capreolus in the forest of Trois Fontaines in Champagne for 27 years. They published their findings in PLOS Biology recently.


A Roe buck in friends' garden. 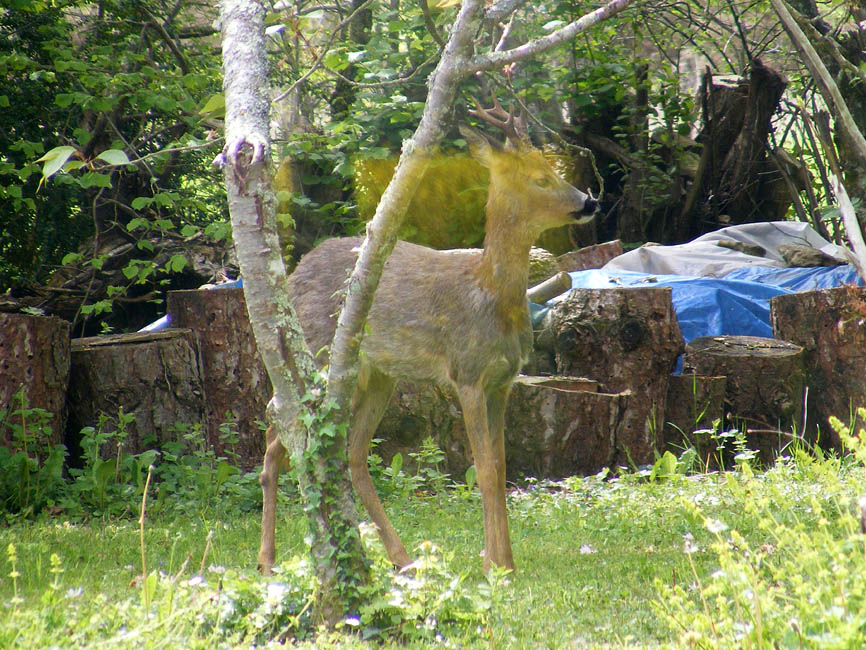 Roe Deer numbers in France are increasing, but the rate of increase is slowing. Fewer fawns are being born and fewer are surviving to adulthood. Careful monitoring of the does parturition dates reveals that they haven't significantly changed from year to year, even though the date of leaf burst in the forest is now earlier by about a fortnight compared to when the study started.


Taken through a glass door, hence the orange reflection which mars the photo. 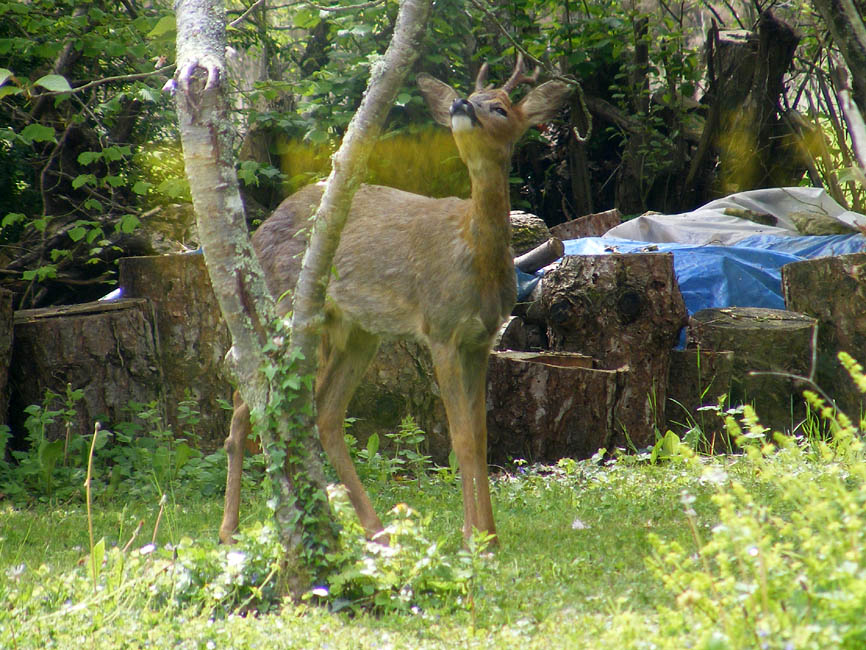 This means that the deer are no longer giving birth to coincide with peak availability of food for the mothers, which impacts on their milk supply. Roe Deer are browsers, feeding mainly on coppiced trees,  and rely on the new shoots in their forest habitat. Fawns aren't gaining weight and strength as quickly as they should and as a consequence are more vulnerable to predators, disturbance and other stresses. The study surmises that the likely cause of death for most fawns was lack of food, as the deer this forest are not subjected to pressure by hunters or predators.


Roe does in agricultural rape, feeding on the flowers. 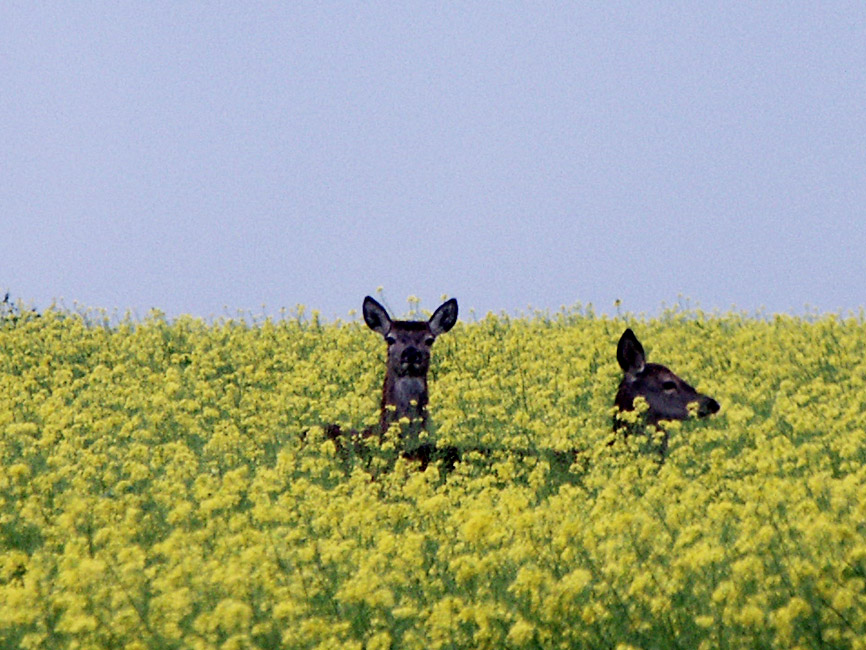 The scientists have concluded that Roe Deer ovulation and conception, and therefore parturition, is linked to day length, not temperature, and that they are likely to be climate change losers in the long run. This is exacerbated because does all tend to give birth around the same time (May), and those few which give birth early will not be sufficient to cause an evolutionary change. All the fawns are vulnerable at the same time, which means that extreme weather conditions, for example, could wipe out an entire generation. Other studies have indicated that Greenland caribou (reindeer) have similar issues, but that Red Deer are adapting and giving birth earlier (interestingly, by reducing gestation periods).


A doe grazing in the valley of a small stream surrounded by forest. 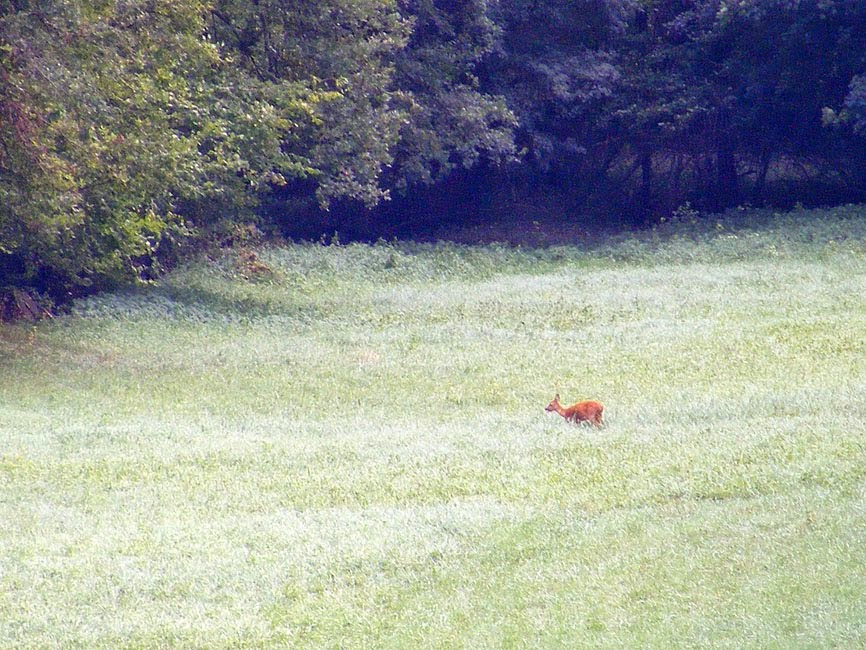 The average springtime (April - June) temperatures at Trois Fontaines have increased year on year and are now nearly 1.5° higher than when the study began. This rise in temperature is causing trees in particular to respond by bursting into leaf earlier. The research team used the flowering date of the Champagne vines as a proxy for calculating peak vegetative flush each spring (the dates are published annually by the wine producers association). Roe Deer gave birth a month prior to the vines flowering when the study started, exactly when the tender green shoots of many plants are available, full of nutrition before their energy goes into flowering and seed production. The mismatch between birth dates and peak vegetative flush increased by about half a day a year. A fawn born on or before 12 May (on average a month before the vines flower) has a 50% chance of surviving to winter and adulthood. After that date, survival rates plummet, and one born at the end of May (about two weeks before the vines flower) only has a 24% chance of surviving. (It should be noted that the number of days mismatch between birth date and peak vegetative flush in any given year is a better predictor of survival rate than birth date per se.) Older, heavier does tend to give birth earlier, so there is some natural selection mitigating the effects of climate change, but probably not enough in the long term, and the tendency to give birth earlier is not strongly heritable.

The data on deer birth dates and relationships was collected using a capture-mark-recapture programme. The Roe Deer lifecycle is somewhat unusual, in that it includes a period of embryonic diapause, which effectively doubles the period of gestation. They give birth in the spring, the rut takes place in the summer, then there is an embryonic diapause in the autumn, before true gestation takes place in the winter.
Posted by Susan at 09:00

That's fascinating - and very sad. Thank you for giving us access to it. P.

If god wanted a climate change, in his infinite wisdom he would send a prophet — some people spell that profit — to let us know about it. W — you know who I mean — used to talk with Him on a daily basis and, consequently, he denies any global warming. Look at the winters we're having, here in the states!

We've had far fewer visits of the roe deer this year.

This year the mismatch between peak vegetation dates and birth dates is going to be enormous, so I think we can expect very low survival rates.

that's happening in Morocco as well with various species, the season cycles thrown off causing die-offs as well.