Or in this case more like Saracen, Moor, Caesar, Mercenary. These carved heads are a selection of those which feature on the ends of the pews and on internal doors in the church at Montrésor. It seems likely that they were chosen from a pattern book of 'types of people'. I don't recall that any of them are women at Montrésor, which is a little bit unusual.

An Ottoman Turk.
France was allied to the Ottoman Empire from the time of François I and Suleiman the Magnificent's ground breaking inter-faith alliance in the 1530s right up until Napoleon's invasion of Egypt. 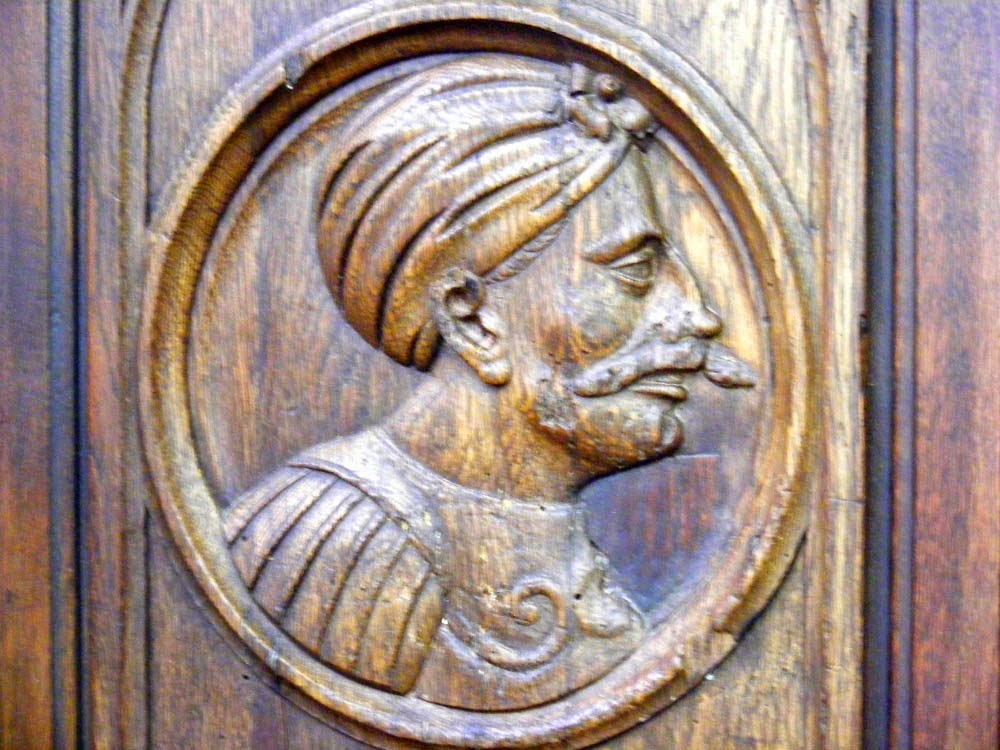 A black African.
Both the character above and this one below could have been termed either a Sarrasin (Saracen) or a Maure (Moor) in the medieval/renaissance European world ie someone who was either Muslim and/or not white. Generally someone of Turkish or Arab origin would be referred to as a Sarrasin and someone with black skin as a Maure, but there is a lot of crossover eg the Arab North African rulers of Spain contemporary with the Carolignians were called Maures, but their forces invading France are usually referred to as Sarrasins; anyone with a swarthy skin, let alone black, was likely to be referred to as a Maure (such as Ludovico Sforza). 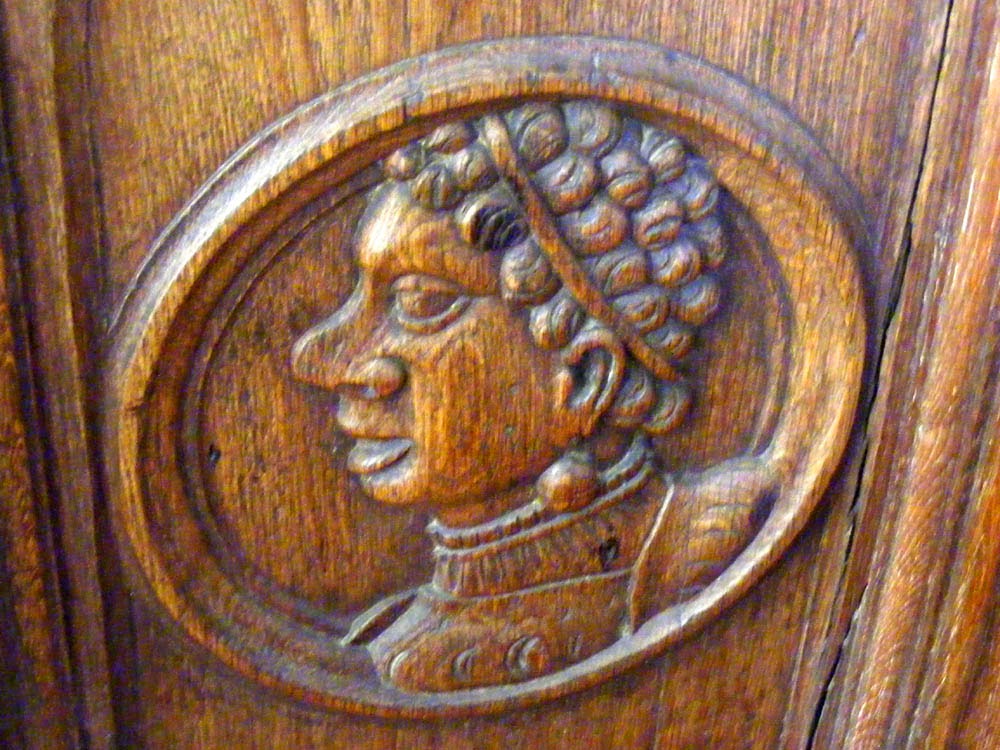 A Roman Emperor.
The glory days of the Roman Empire were always nostalgically regarded as the good old days by the Western European ruling classes and for centuries images of kings and lords dressed up in ancient  imperial kit appeared as a motif in European art. 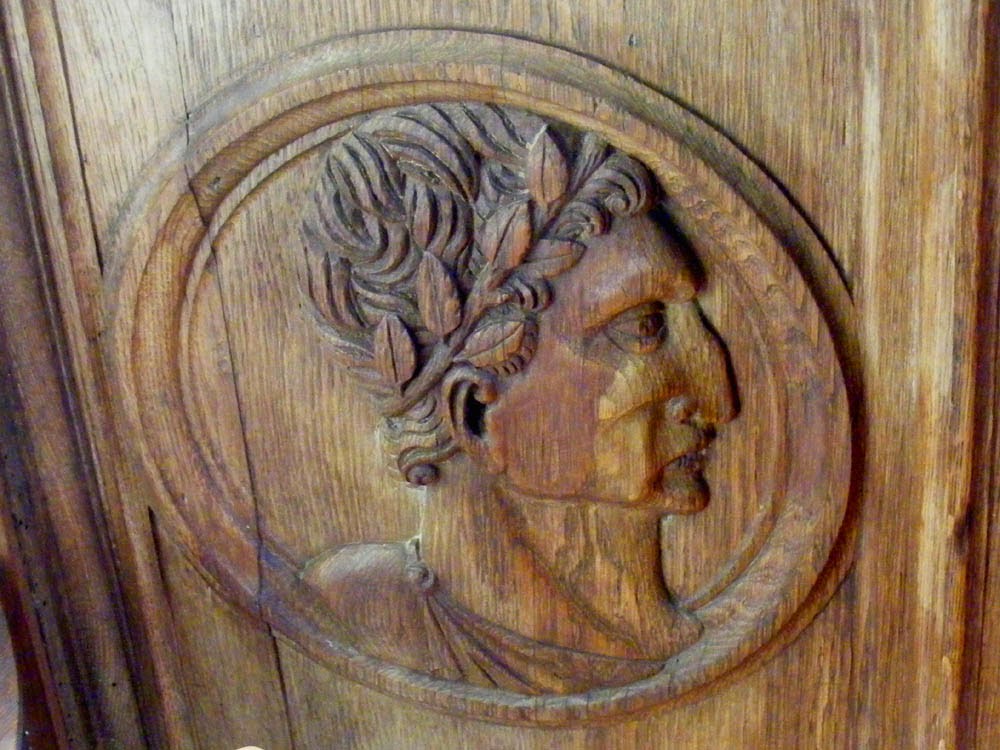 A soldier.
Probably a mercenary, as they seemed to go in for these elaborate helmets. 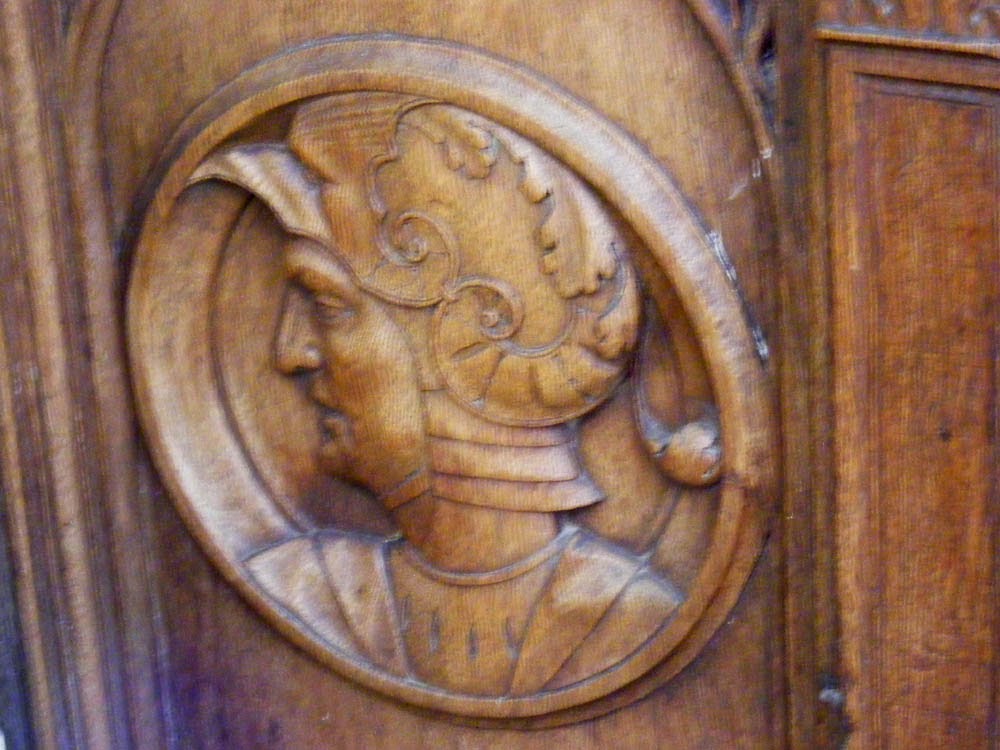 The pews are 16th century, and I assume are original to the church, which dates from the first half of that century. Their style is fairly unsophisticated (compare them with the magnificent and much more ambitious pews in the chapel at the Chateau of Ussé, which are exactly contemporary).

Based in Lincolnshire, No 5 Group were the most reknowned of the specialist precision bomber groups, and included the squadron which delivered the bouncing bombs that breached the Möhne and Eder dams in Germany.

**********************************************
Threat to Kew: I have just heard, via Jeff Ollerton's biodiversity blog, that the Royal Botanical Gardens at Kew is once again threatened with funding cuts. It is now at a level which will really hobble this globally important botanical research and conservation facility, with the worst case scenario being the loss of 120 posts, mainly scientists and outreach staff, and the closing of some projects. Consequently they have started a petition, which if you are interested you can sign here. Even if you are not a petition signer, it is worth going to the page and reading about what Kew do (many people don't realise how important their phytopharmceutical research is, for instance, or their practical rainforest regeneration programmes). Most important of all they run the world's largest seed bank. David Attenborough has been supportive enough to make a video to promote the petition.
Posted by Susan at 09:00

Did you watch the first of 3 programmes on BBC4 last night. Botany: A Blooming History. It was very good. It is on I-player for a week. C

Colin: Thanks for this. I remember seeing the programme when it was first released a couple of years ago. It is extremely interesting.

May be the mayor of London should put a tax on those unoccupied mansions to go towards the funding of Kew. D'une pierre deux coups ….