The Petit Palais in Paris is one of our favourite museums. It was first suggested to us a couple of years ago by my friend and ex-colleague Christine, who is a ceramics conservator living in Paris. She mentioned it has a very nice collection of Greek vases, something I am quite keen on. She also pointed out that visiting the permanent collection is free and the café is good. We were sold and so while we were in Paris recently we popped in to the Petit Palais again. I don't think it is on many foreign tourists list of places to visit, so it is not crowded. 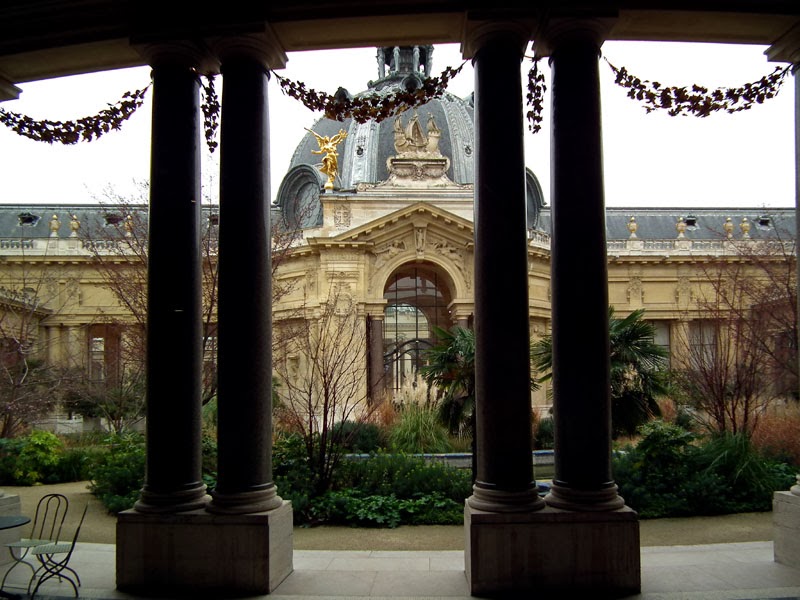 It is situated opposite le Grand Palais and houses the City of Paris Fine Arts Museum collection. Both buildings were initially constructed for the Universal Exhibition in 1900, and turned into museums in 1902. Decorative additions to the interiors continued until 1925 in order to achieve the architect's dream of glorifying Paris and the Arts.

Me ordering coffee and mini cakes for morning tea in the café. 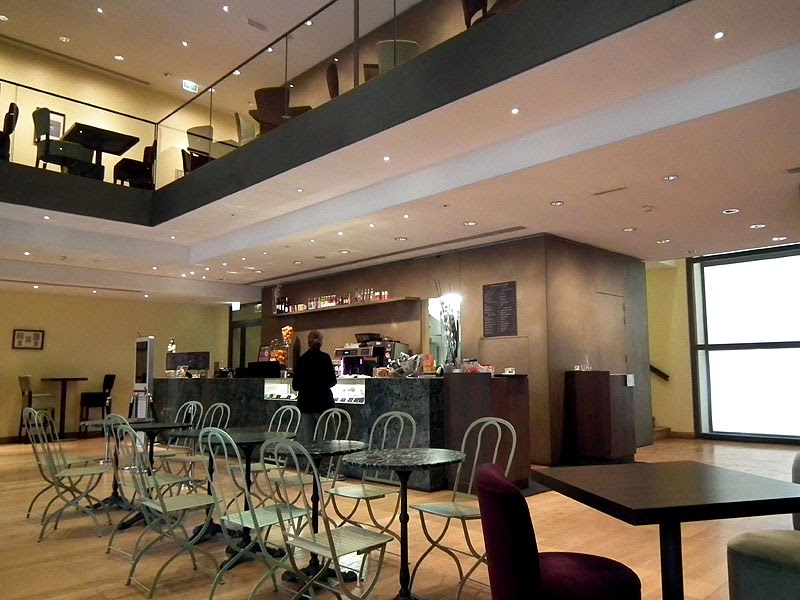 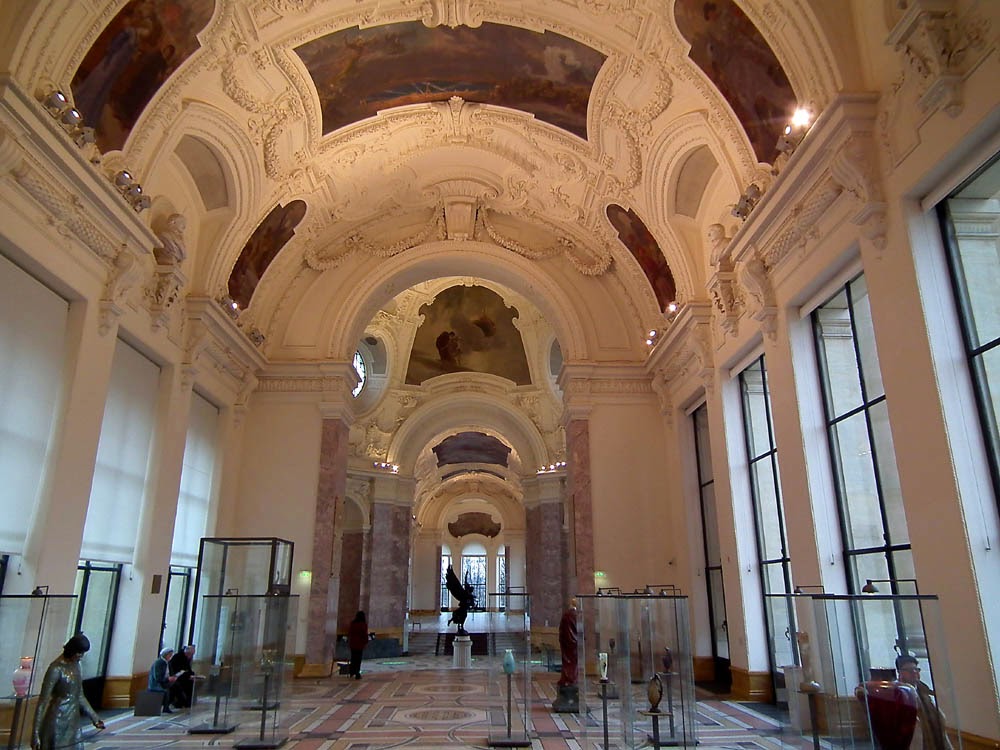 The view from one of the galleries, looking across to a statue of Clemenceau on the corner of Avenue Wilson and the Champs Elysée and in the general direction of the Elysée Palace (the French presidential residence). 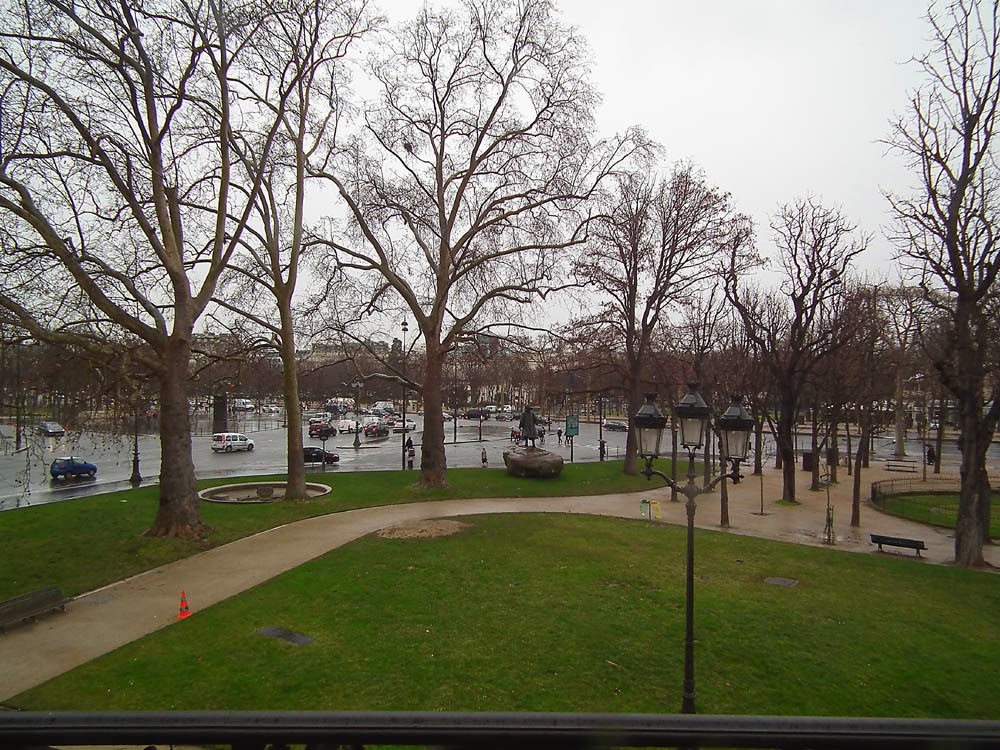 We've got to a slightly frustrating circular stage with the chapel. In order to apply for grants we need an architect's diagnostic report on the problems and likely cost. In order to get an architect's report we need a grant. It was decided to approach the commune and ask if some of the €10 000 they have pledged for repairs can be used to pay the architect to do the report, which will cost between €1800 and €3900, depending on which architect we go with. There was some concern expressed at what effect the upcoming local elections might have on our promised funding, but my understanding is that the communal budget has been voted on and can not be changed in any significant way by the incoming council once they are elected.

Another alternative would be to ask Bâtiment de France if emergency repairs, funded by the commune's €10 000, can go ahead without the diagnostic. Personally I think it is unlikely BdF will give the go-ahead, and quite rightly.

Jean-Yves updated us on his progress with organising the annual concert and presented the programme suggested by the musicians. This consisted of two Mozart pieces, a Debussy sonata and some Ravel. There was a lot of discussion about how difficult Debussy can be to listen to and whether we should opt for something more populist. The difficulty is the range of instruments played by the chosen group. No keyboards could be a serious drawback. Jean-Yves took the comments on the chin and is going to discuss it with the musicians to see if they can offer something a bit lighter. He's also been having his own frustrations with the grant giving organisations. He needs a couple of thousand euros to make sure the books balance but he's found that the grant giving organisations are bemused by someone from the patrimoine sector asking for money to stage a culturel event. As he says, it's all a matter of language and he has to be careful how he words applications.

Debussy difficult to listen to? Good grief. Stick with it, chaps! P.