There is a large painting depicting three naked women hanging in one of the salons of Chenonceau. It's called The Three Graces and is by Carle Van Loo (not his brother Jean-Baptiste, despite the frequency you will find it attributed to him on the internet). It is widely believed to depict three of the five de Nesle sisters, but since it is clearly a picture of three attractive young women, there is a certain amount of debate about the identification of the notorious sisters and the subject of this painting. The de Nesle sisters, with the exception of the youngest, were not considered to be beauties, were all long dead by the time the picture was painted and Van Loo wasn't known for being kind to his subjects.

The painting was the last major work completed by Van Loo, and he too was dead by the time it was exhibited at the Paris Salon of 1765 (these annual or biannual exhibitions, known as salons, were the place major works were traditionally first exhibited, before going off to the private collections of wealthy patrons). It was not his first attempt at painting this subject, but a previous effort a couple of years earlier had been so roundly criticised for not being sexy enough that he destroyed it and there is only an oil study remaining of the original version.


Probably not the de Nesle sisters, and definitely not by Jean-Baptiste Van Loo. 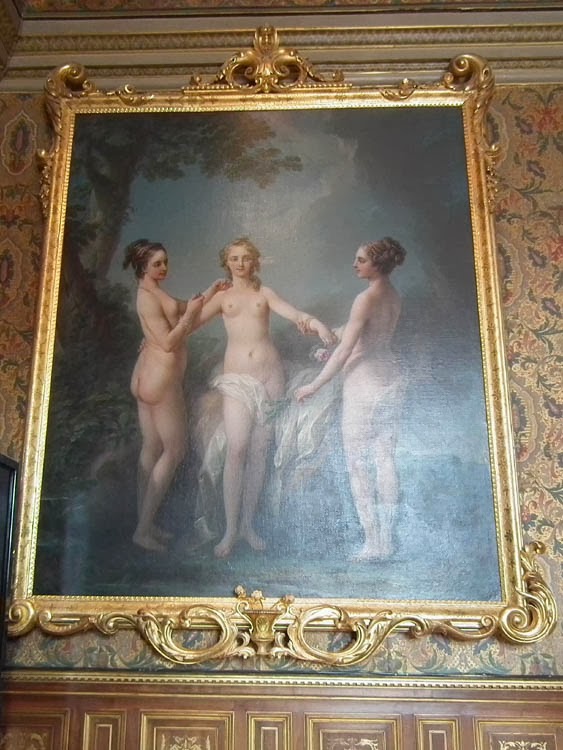 How and why the painting comes to be hanging at Chenonceau is shrouded in mystery. The best guess is that it was installed in 1862. The painting disappears from the public records in the late 18th century, after the death of its first owner, not to reappear again until an auction in 1862, where it was presumably purchased for Chenonceau by Madame Dupin's nephew and heir the year before he died. The chateau then came into the hands of Marguerite Wilson Pelouze. I assume the painting had remained in the chateau and she seems to have kept it even though her aim was to restore the chateau to its early 16th century appearance (ie pre-Catherine de Medici). Likewise the Cuban family who purchased the chateau after Madame Pelouze went bankrupt and now the Menier family have retained the painting.

The de Nesle sisters became notorious because of their association with the young libertine King Louis XV. They were, one after the other, his official mistresses, in the days before Madame Pompadour and Madame du Barry. They were grasping and manipulative, out and out gold diggers, but he enjoyed their company and probably had a genuine passion for at least one of them. Their only tenuous connection to Chenoceau is that they were the grandnieces of Laure Victoire Mancini, the second Duchess of Vendôme, whose husband inherited the chateau in 1665 and whose portrait hangs in the same room at Chenonceau. Their mother's lover, the Duke of Bourbon, acquired the chateau in 1720 and over a period of 13 years sold off all the contents before selling the estate to Claude Dupin.

It's certainly a painting you remember once you've seen it. Thank you for telling us the story.

Fraussie: The more I delved into the story of this painting the more intrigued I became -- it wasn't at all what I was expecting. There is more I could have said about what the women may represent too -- they are not your normal 3 Graces, that seems certain from the objects they are holding and the way they are engaging with the viewer. I think visitors to the chateau remember the painting itself because it is very large and the women are almost life size, so it has quite an impact.