The Cité de l'architecture et du patrimoine, housed in the Palais Chaillot at Trocadero in Paris is staging a special exhibition called "1925, when Art Déco Dazzled the World". We took the opportunity to go and see it last Friday when we spent a few days in Paris after I returned from Australia. Simon's a big fan of the Art Déco style and particularly wanted to see it. The exhibition has been extremely well received by the public, proving so popular that the museum has extended the exhibition for a few more weeks and it will now end in mid March.


I think this bonnet ornament probably represents Suzanne Lenglen, the first female tennis superstar. I seem to remember she was a bit of a rev head, owning at least one tourer (a midnight blue Delahaye from memory). 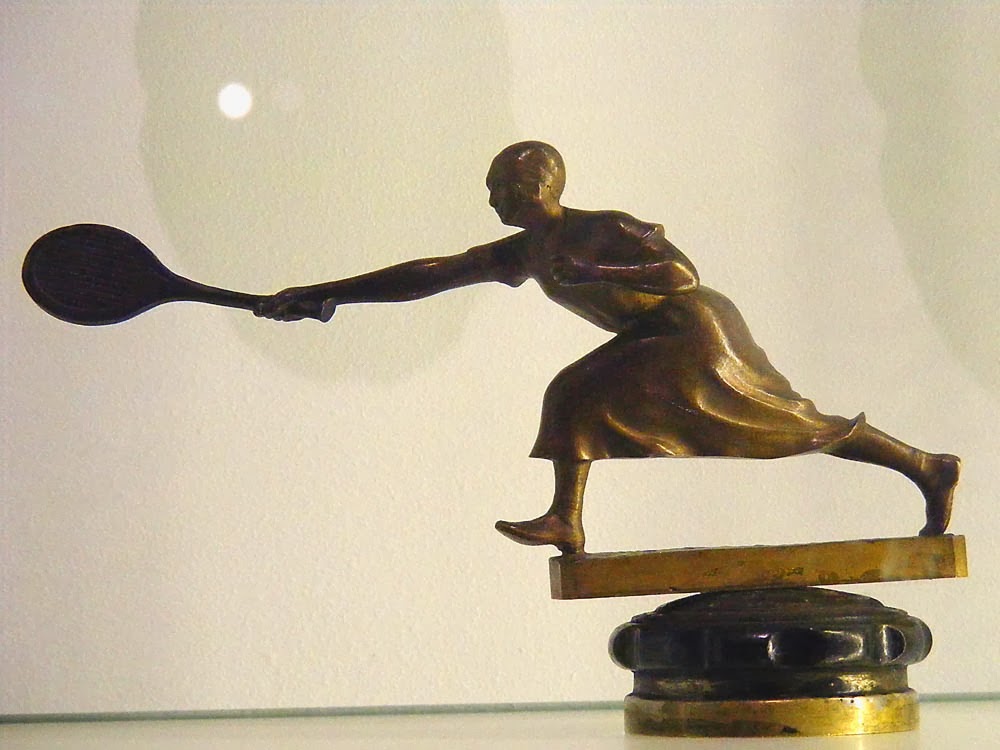 The exhibition focuses on 1925 because of the highly influential Exposition Internationale des Arts Décoratifs et Industriels Modernes held in that year, which resulted in the term Art Deco becoming widely adopted. The style is characterised by pared down essential geometric shapes but somehow manages to be simultaneously louchely glamorous. Between the Wars, industrialists and movie stars ruled the world, and everything from factory buildings to furniture, fashion to flying boats was boldly Art Deco.


A Bugatti displayed under a rather intriguing painting called Vine and Wine by Jean Dupas. More information can be found here. A few years after producing this work for the Bordeaux section of the 1925 exposition, the artist was commissioned to design a series of posters for the London Underground. 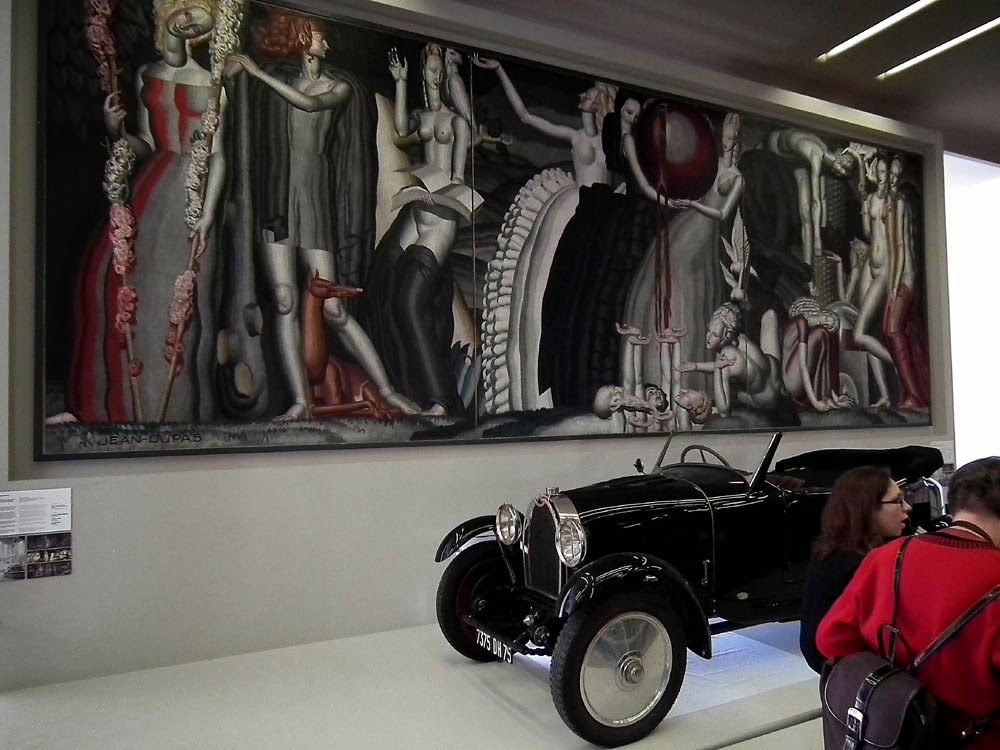 Architecture, in the form of models and drawings, features strongly in this exhibition, but other objects have been chosen to set the scene and give a wider view. A few obvious categories of object, such as jewellry, have been ignored, perhaps because other current exhibitions in Paris will cover them. You get a good feel for the era's obsession with speed and sport though, with many objects reflecting the heyday of the ocean liner and the daredevil racing driver.


An inlayed cabinet that I couldn't find any information on. It appears to be burr maple and ivory. 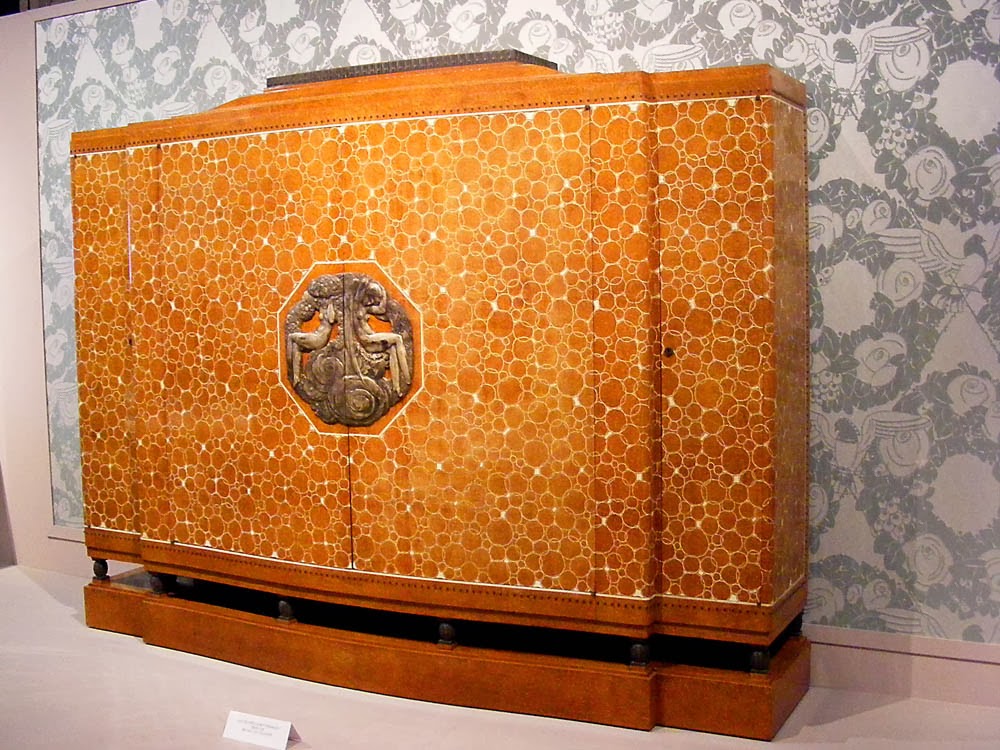 I've chosen a few of our photos to try and give our impressions of the exhibition. If you are planning to visit, I suggest getting there just before opening time and joining the short queue. We took an hour to go around the exhibits and by the time we came out the rooms were packed and we would never have been able to see or photograph objects if we had arrived later.


Detail of the cabinet. 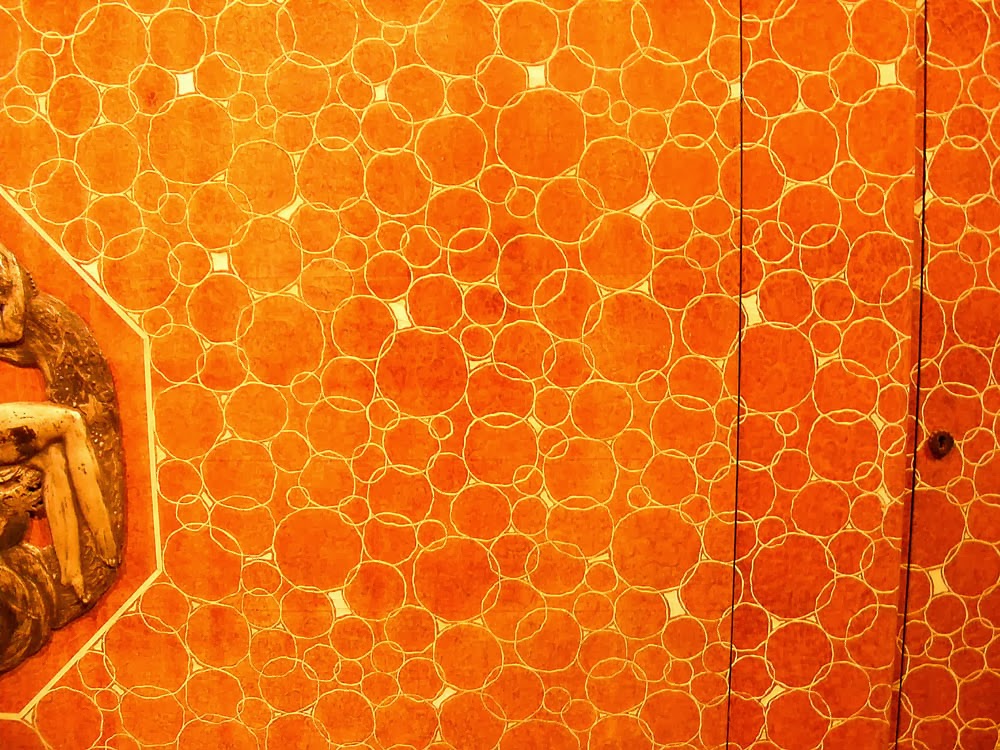 Two flapper dresses, almost impossibly flimsy. The contrast between these and the fashion of the generation before is very striking, and it must have taken some courage to step out in these dresses that were finer than what their mothers would have worn as under garments. 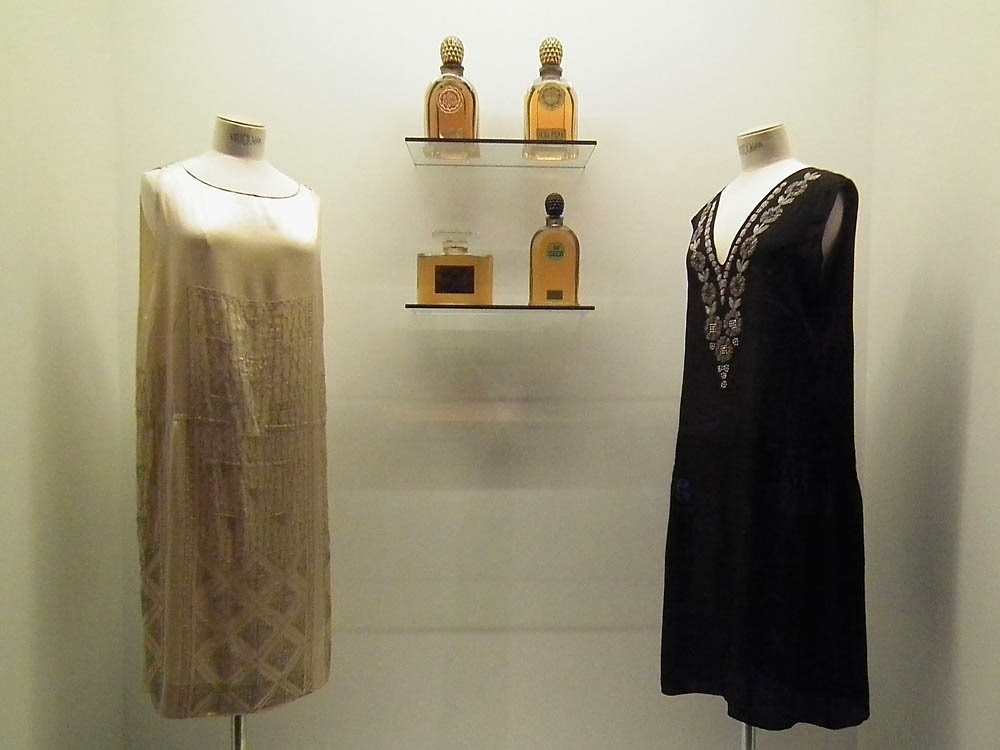 A beautifully made architectural model. 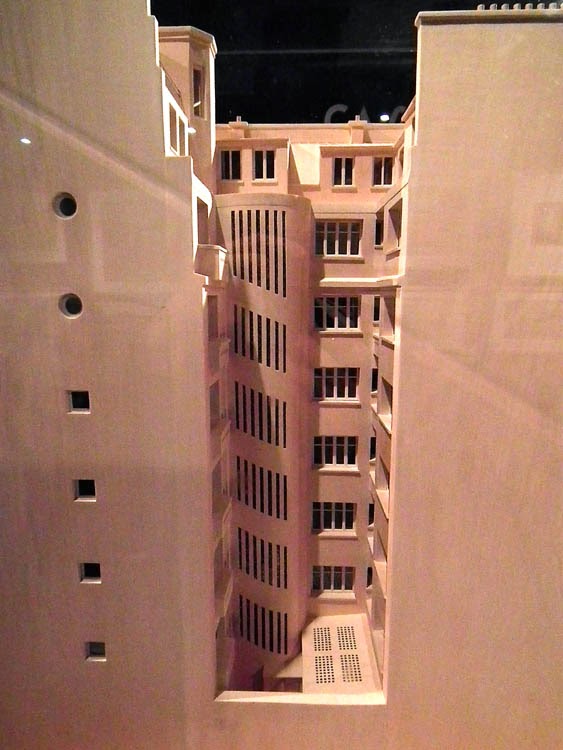 An iconic poster advertising cruises on the ocean liner Normandie. 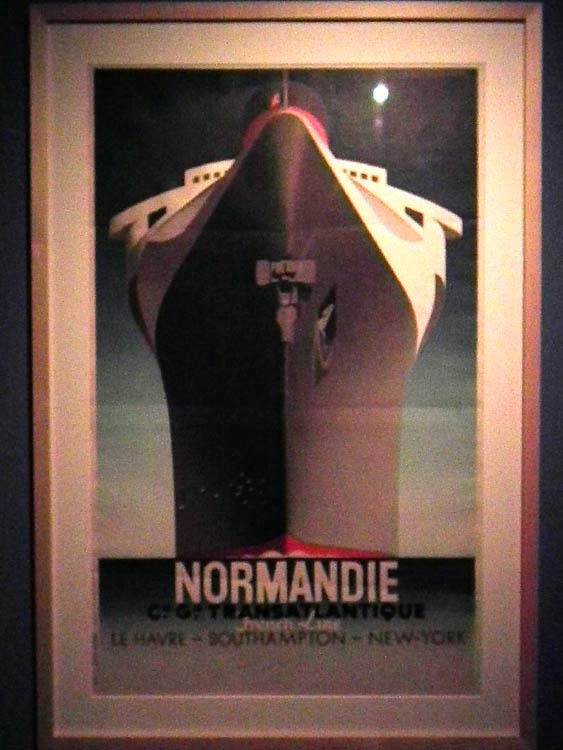 Sèvres vases produced under the artistic directorship of leading exponent of Art Deco, Henri Rapin. These are quite different to what I think of as classic Sèvres. 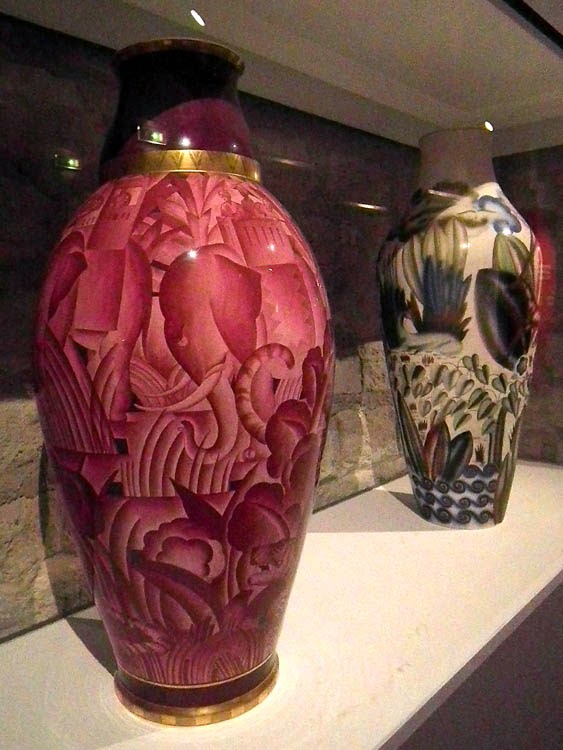 The view from the museum café. Anyone can come in, use the café and enjoy the view. You do not need to visit the museum if you don't want to. 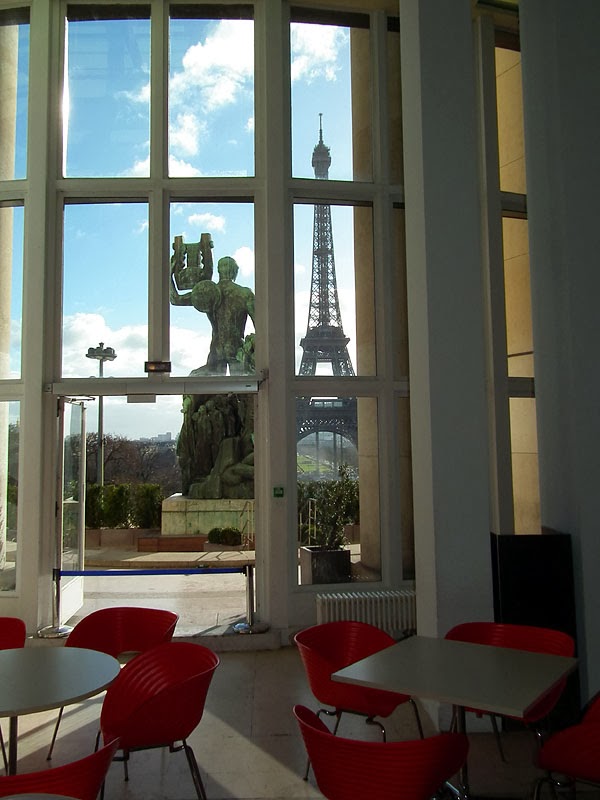 ***********************************************
Nature News: The League pour la Protection des Oiseaux (LPO) has issued a sad little press release, saying that over 5000 birds have washed up dead on northern French beaches during the wild storms they've had up there. Half of the dead birds have been puffins, but guillemots, razorbills and kittywakes are also there in significant numbers in the past fortnight. The cause of death has mainly been exhaustion or starvation but the LPO believes that some deaths are the result of ships taking advantage of the weather to discharge noxious substances which have poisoned or gassed some birds.
Posted by Susan at 09:00

It is very sad about the "crash" of seabirds...
but in the weather we are currently experiencing in the North Atlantic, all too common!
However, if... as is suspected... this has been exacerbated by illegal dumping of chemicals to clean tanks... then it is sick, slimy and underhand "profiteering" at the expense of the environment!
But, oh so typical of today's greedy climate!!

I am also a great fan of the Art Deco period...
and of the Art Nouveau era....
but I am most interested in the short period from 1918 to 1922...
during this post-War period a line of symmetry began to creep in.
I've a couple of pieces...
that old pub seat in our sejour being one.
I feel that the poster style of the Russian Revolution and the wonderful pre-War Bauhaus designs influenced others...
after the horrors of that War, people were not "happy" with the free flow of the Art Nouveau.

I'm sure Celestine and her cousins of the period have a little Art Deco influence.
Melbourne has many fine examples of Art Deco architecture although greedy developers are destroying and have destroyed many fine buildings.

I like the architecture - all those picture palaces and seaside houses - but am not so taken with the furniture. Ironically, I think it's because it looks too much like architecture and in my mind the scale doesn't translate.

Tim: I'm often not comfortable with Art Deco -- too closely associated with some nasty political extremes.

I'm with you Simon the buildings are good... Not keen on the rest. C

stupid boaters. we really should be land creatures.

Pearl: When I first read your comment I thought you were talking about those who took cruises in the 30s!