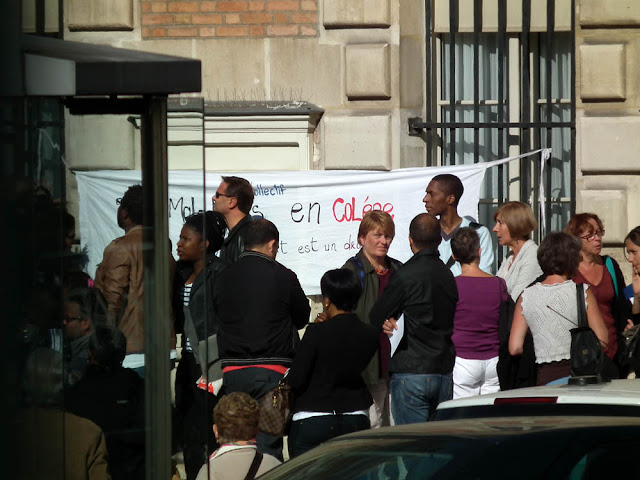 Fraussie Grouet remarked on her blog recently that Aussies love to shorten words. It's true. We eat brekkie in the morning, have a cup of coffee and a biscuit for mornos mid-morning and arvo tea mid-afternoon*. We wear our sunnies on bright fine days and cook on the barbie outdoors. The habit seems to be accelerating too. We've noticed that firemen have become firies in the 15 years since we left, for instance.

We Australians are not the only ones though. The French shorten many words. You often see or hear resto for restaurant, organic produce is bio(logique), eco-friendly is écolo(gique) and economical is éco(nomique).

We were walking through le Parc des Buttes Chaumont in Paris one day and could hear a commotion coming from in front of the nearby Town Hall. A group of demonstrators had gathered to protest about the lack of social housing in the area. I can't read their banner except to note that they are a collective, angry and (something) is a right. A French couple walking in the opposite direction to us also noticed the protest -- 'Qu'est-ce qu'il se passe ? Oh, c'est une manif...' (What's happening? Oh, it's a demo...)

*You will also hear these short breaks referred to as smoko, although it is probably now considered quite old-fashioned.
Posted by Susan at 09:00

It is common in many languages these days. A sign of change with the young people picked up by the older ones.

I blame the rse of txt mssging!

I have to admit that the Australian habit of shortening so many words seems cutesy to me. At the same time, manif, écolo, petit déj', bio, and other French abbreviations don't bother me. I guess that's because English is my native language.

Oddly (or not?) it's a habit you share with the Dutch (hence cookie, poppet, etc., which are all imports direct from Dutch diminutives).

My favourite Australianism is calling a dustman a "garbo": no doubt if you spend your working day with other people's rubbish, you just "vant to be alooone."

Autolycus: I believe the only response to that could be Boom-tish

I am starting again because I missed a bit out:

The funniest shortening of words I ever heard was when I was standing at the bottom of a black run ski slope in Austria one very cold day. (I hasten to add I had not just skied down it myself.) A young man hurtled down the last bit of the slope, slid to a stop and fell over. "Kinell, that was steep!" is what he said as he looked back up to where he had just come down.

Nice post. I can almost hear Simon saying some of these abrevos...

C&E: yes, a sign that many societies are becoming less formal I think.

Tim: it doesn't seem to be connected to texting to me.

Ken: I have certainly cringed when I've seen young Australians in Europe going into casual, relaxed, friendly Aussie mode, because they think Europeans find it charming. What they don't realise is how off-hand and unprofessional it appears in the workplace.

Gaynor: the French ones or the Australian ones?

Ssn, I ws bing srcstic!
The joocr is locatd and rddy 4 cllctn!
Hope you enjoyed yourself this afternoon...
I see Simon still reads the blogs, then...
zzzzzzzzzzzzzzzzzzzz!

Tim: just indexing my photos from today. Might be over tomorrow arvo to pick up the juicer.

I wasn't, of course, objecting to the shortening - I was having problems understanding what people were saying in my native tongue! I have a French friend who's a champion at shortening words: l'apre'm for après-midi, biblio for bibliothèque, etc. She also uses a large amount of slang which I secretely believe is due to the French académie preventing people from inventing words. "Ce n'est pas français" (it's not French), people will tell you about a word that EVERYONE is using. Blog in France today (http://www.bloginfrance.com/2012/festival-du-nouveau-mot-or-how-to-make-up-french) posted on a French competition called the Festival du nouveau mot (neologism festival) that we should all enter!

Fraussie: yes, of course. Sorry -- I didn't mean to misrepresent what you had said.