The Connection Between Cold and Gigantism 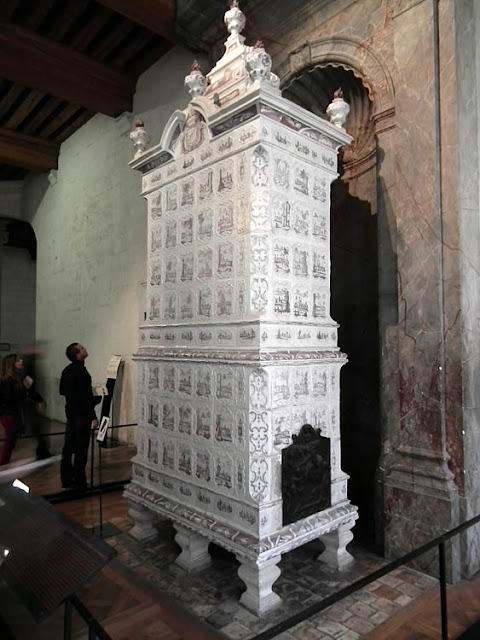 This huge Polish ceramic stove is one of three installed at Chambord by the Marechal de Saxe. He was appointed Superintendent of the Chambord Hunt in 1745 by King Louis XV and then obliged to live in the by this time run down royal chateau. He spent his personal fortune on renovations, purchasing the stoves in a vain attempt to keep at least some of the rooms warm.

There is an outing to learn about lichens at the Etangs de Narbonne on Sunday 25 November. Meet at 14.00 in the carpark of the Maison-pour-tous at Joué-les-Tours (from Boulevard Jean-Jaures, turn at MacDonalds in rue de la Douzillere. The Maison-pour-tous is at the base of the water tower.) The lichens collected will be identified at the end of the afternoon by experts from the Association de botanique et mycologie de Sainte-Maure-de-Touraine. €3 per person.
Posted by Susan at 09:00

WOW! Where did the smoke go?

Now that's what I call a stove!!

Stoves like this are still around... and the new ones look much like these...
but with lots of gold trim...
mainly Swedish made, they are effectively a storage radiator.

There are also some modern beauties that use visible chunks of basalt as the storage... very modern and beautiful... if you want the living room looking like the beginning of "2001"!!

Gaynor, I'm interested in where the smoke went too, now that we're renovating our Renaissance fireplace!

Gaynor & Fraussie: I assume there is a flue exiting from the back and then up a chimney, just like a modern wood burning stove.