The Cavalry's on its Way 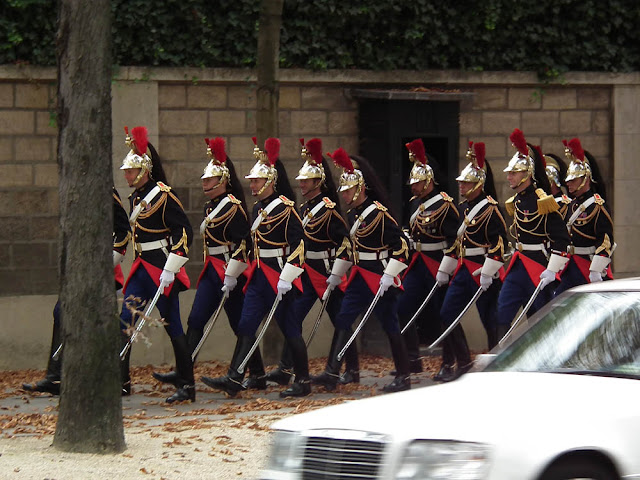 While we were in Paris in September we happened to be walking past the Elysée Palace (the official residence of the French President) just before the arrival of the President of Azerbaijan for a meeting with Francois Hollande. A troop of the Republican Guard cavalry were forming up. They are the only horse mounted troops remaining in the French armed forces according to my internet researches, but this day they were sans les chevaux, malheureusement. 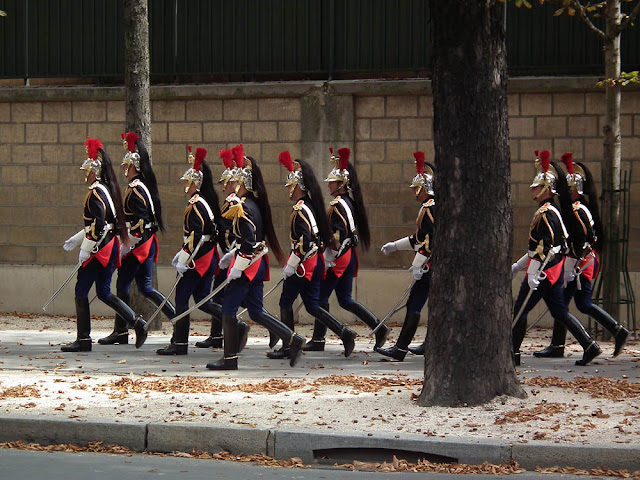 They lined up, got their rhythm and then quick marched in through the gate. Their officers ambled in after them. Cavalrymen always look ever so slightly ridiculous and self-conscious when unmounted. 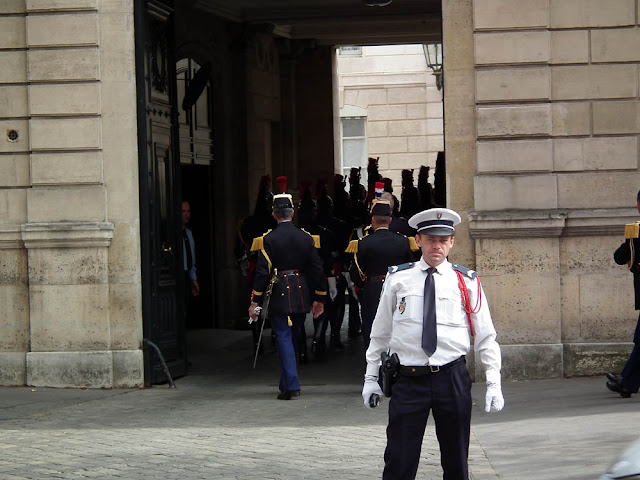 I love the luxuriant ponytails on their helmets -- very swords and sorcery warrior class. These flowing locks are apparently exactly what they look like -- horse tails. The day we saw the Republican Guard they were wearing the version of the uniform that includes blue riding breeches. There seems to be very few photographs of them in this combination, so we are curious to know what the criteria for appearing in the various uniforms are. The three different units of the Republican Guard cavalry ride different coloured horses -- do they also wear different coloured breeches? Or is it the difference between summer and winter uniforms? Any militaria or costume buffs amongst our readers who can shed any light? The non-cavalry troops in the Republican Guard wear blue trousers and peaked caps, not riding breeches and shiny plumed helmets.

There is a fungi foray in the Foret de Chinon today. Meet at 14.00 at the Carrefour Charles VII (from the carrefour de La Pucelle, take the route forestiere towards Rivarennes, on your right if you are coming from Tours).  All the fungi will be identified at the end of the afternoon by mycology experts from the Association de botanique et mycologie de Sainte-Maure-de-Touraine. €3 per person.
Posted by Susan at 09:00

That armed officer in the white shirt is viewing you with suspicion... is everyone with a camera a possible spy or terrorist these days?

Tim: well, you can hardly blame him -- I'm aiming directly through the gateway of a state institution where the president is present with a camera. I could be anyone, but beyond glaring at us, he obviously decided we were tourists and left us alone. It's always a bit dodgy photographing the military. This sort of touristic photography is only toleré.

Walking in tall riding boots doesn't only look silly, it's hard to do. In my experience, anyway.
My guess is for different color uniforms by season.

I looked it up:

White riding breeches in Summer
Blue ones for winter

Emm: yes, they are notoriously difficult to walk in. At least they are not wearing hussars uniforms, which don't bend when the wearer does, they are so encrusted with braid across the chest.

Beaver: I looked it up too, but only found a photo showing all 4 possible uniforms, with no explanation of when they were worn. Seasonal would have been my guess, so glad to have it confirmed. It explains why there are so many more photos of them in the white breeches.