It seems a little odd for a king to choose a small, slimy, rarely seen amphibian (sometimes referred to as les batraciens in French) as an emblem*. Even stranger for them to be depicted throughout Chambord as belching out a stream of bubbles. In other chateaux they are shown breathing fire, like a dragon, but here at Chambord, they are burping. Too rich a diet in those heady Renaissance days? 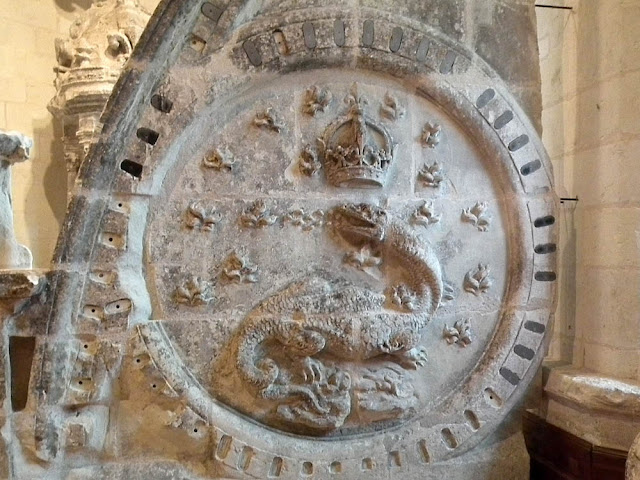 This one is on some old decorative stone carving from the roof which has been brought in from the weather and is now housed under the coach house. 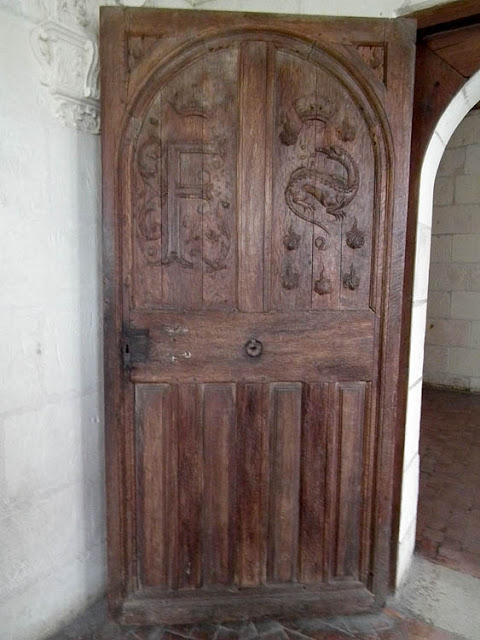 This one is on a fine old panelled door in the Francois I section of the chateau.

*The salamander in legend is said to be somewhat like the phoenix, able to survive unscathed or rise up out of the fire. The modern theory for the reason behind this reputation is that salamanders, which are native to the Loire area, like to live in dark, damp places, such as the firewood pile. When the log sheltering a salamander is placed on the fire the salamander scurries out - surviving the fire unscathed...thus making it a fine emblem for a powerful monarch such as Francois I.
Posted by Susan at 09:00

Scurries out while the King sits there "pissed as a batracien"... perhaps.

Love the 'burps' of flames - like an early flame thrower to catch all those unwary enough to annoy Francois 1ere perhaps?

Didn't do too well scurrying out of the heat at Pavia, though...

Interesting, as always! I haven't been to the castle itself at Chambord for a long time. I'll have to go back. I'll also keep a look out for bubbles and flames whenever I see the salamander.

N&A: I am always amused at how gormless a lot of heraldic animals are.

Fly: No, not one of his finer moments, and his relationship with Henri was forever tarnished by the deal.

Fraussie: I'd like to see the real thing, but they are nocturnal, and I am not...

We had salamanders living in our back yard in San Francisco, of all places. I think they liked to wintertime wetness, with mild temperature.

So why is the grill/broiler in a restaurant kitchen called a salamander? That's what I wonder.

Ken: Yes, good question. We always called it a salamander at college, but no one ever asked why I don't think. It would be interesting to know.