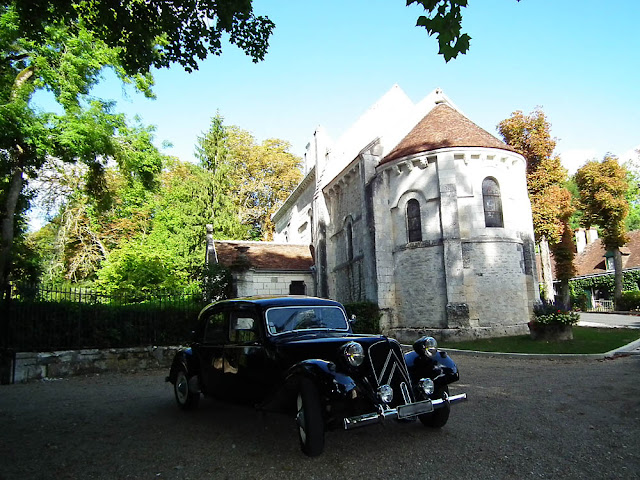 Célestine parked by the chapel at Chanceaux-pres-Loches.


There is a fungi foray to the Etangs de Narbonne on Saturday 17 November. Meet at 14.00 in the carpark at the Maison-pour-tous at Joué-les-Tours (from Boulevard Jean-Jaures turn at MacDonalds in rue de la Douzillere. The Maison-pour-tous is at the base of the water tower.) The fungi gathered will be identified by experts from the Association de botanique et mycologie de Sainte-Maure-de-Touraine at the end of the afternoon. €3 per person.

Tomorrow is Orange for Orangutan day. Please support the conservation groups and individuals raising money to save this gravely endangered and thoroughly endearing species. Wear orange, do something creative in the kitchen with orange ingredients and give generously if anyone near you is staging an event. You can also give directly by going online to Just Giving.

A French senator is (somewhat inadvertently) doing his bit by proprosing a 300% increase on the tax for palm oil. If it goes through it will be a nice little earner for the central coffers, specifically the state health insurance pot, and the aim is also to reduce the quantity of this widely used saturated fat consumed. The tax has been dubbed the Nutella Tax, as this popular spread is eaten in vast quantities here and contains about 20% palm oil. A by-product of this tax will hopefully be some respite for the rainforest habitat of the orangutans, currently being clearfelled to make way for vast palm oil monocultures in Borneo, Sumatra and Indonesia.

The new tax would apply equally to other imported fats, such as coconut oil, and bring them up to the level of locally produced olive oil. With any luck it will therefore result in traditional products such as savon de Marseille being made once again from locally produced fats. Savon de Marseille (an old fashioned, but extremely popular, soap) has no geographic protection or manufacturing specifications because with such an extremely old and traditional product that has become so widespread it is no longer practical to legislate.

Sadly, the Health Minister, Marisol Touraine (previously the leader of our local Conseil Général for Indre et Loire) is not enthusiastic, and although it will be debated in the Senate it is unlikely to be passed.
Posted by Susan at 09:00

I had no idea this lovely soap was popular, I found it on the bottom shelf, in a little supermarket in the Republique area where we were staying. It smells like Frangipani flowers and I was sad to use the last bar, as Diana said she couldn't find any on her trip.
Apparently Palm oil is used in biscuits and other foods, and you have no idea until you read the ingredients.....yuk ! Big polution problem in Indonesia and surrounding countries with the burning off for land clearing for these plantations.

I keep my fingers crossed for the new tax to be voted on. I refuse to eat anything containing palm oil if I'm aware of it. I always check the ingredients to make sure.
Why don't they plant olive trees instead of palm trees?

I met a young man at the Citroen Concours recently from Amboise that has a collection of Tractions. I wonder if you have a connection?
If not, maybe I can put you in contact.
leon

We love Chanceaux-pres-Loches. There's so much more there than you'd expect of a place that's little more than a bend in the road.
Celestine fits right in.

Margaret: It doesn't always smell of frangipani. It's more or less the equivalent of Velvet or any of the other old fashioned pure soaps. Its smell is associated with the smell of 'clean' for many French people. You can buy it in any supermarket, so I am surprised Diana couldn't find any.

chm: I check for palm oil too. Mind you, olive tree plantations in Sumatra wouldn't be any better -- it's still a monoculture replacing a rainforest.

Leon: I don't think we know him, but we may know of him.

Carolyn: yes, I think us posting about Chanceaux might have been how you discovered us in the first place. It is a lovely little hamlet -- we drove through just a few hours ago and it is looking very attractively autumnal.

Hi, I love the car. I'll see if we can make it on Saturday for the Fungi Foray. Is this an English-speaking group?

Fraussie: No, it is French speaking.